Patrick Mayberry: An Artistic Journey Of Faith And Discovery, With A Transformational Awakening Like Never Before 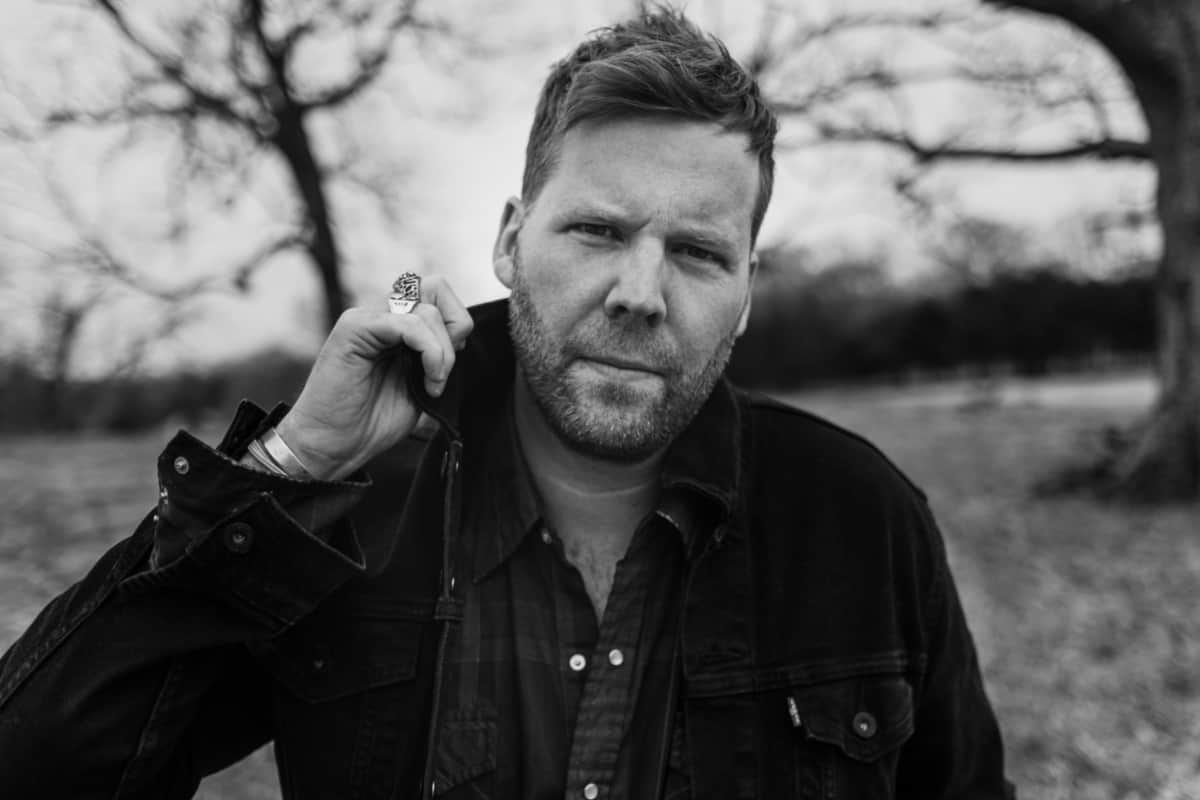 Singer/songwriter Patrick Mayberry never truly understood the power of worship music until he experienced it firsthand at a Passion conference. His YoungLife leader invited him to the annual gathering for college students, which has morphed into a larger movement that’s birthed some of Christian music’s most respected artists, such as Chris Tomlin, Crowder, Kristian Stanfill and Matt Redman. For many, Passion is a multi-day spiritual wake-up call to the things of God. For Mayberry, Passion was a transformational awakening to the intersection of faith and music.

That was nearly 15 years ago. Today, Patrick is on the cusp of embarking on an artistic journey he never quite felt qualified to pursue. Signed to Centricity Publishing as a writer since 2018, the Cookeville, Tennessee native has penned songs recorded by North Point Worship, David Leonard, Mack Brock, David Dunn, Jonny Diaz, Joel Vaughn and Chris Renzema, among others. In addition, he’s garnered sync placements with T-Mobile, NBA, the “TODAY” show and more. To date, Patrick Mayberry has released two EPs independently with 2018’s Joy and 2019’s Live In My Living Room, the latter of which he partnered with Centricity Music to re-release in 2020.

Patrick, his wife Jenny, and their four children recently relocated from Chicago to Franklin, Tennessee, where he now remotely serves as Executive Producer of Worship for Chicago’s Soul City Church. Patrick’s path to becoming an artist, however, has been a long and winding road.

Growing up in the Church of Christ denomination, Patrick was discouraged from enjoying music with instrumentation in worship settings. Therefore, his growing love of guitar felt disconnected from his growing love of Jesus. As he transitioned from middle school to high school while playing the guitar riffs of his idols, Jimi Hendrix and Grateful Dead, he found like-minded friends through his local YoungLife chapter, which consistently merged music and faith.

His collegiate years—a period of time Patrick calls a “dark season”—proved pivotal. “I was still very much figuring out faith and figuring out, really, what every college kid’s trying to figure out: What am I even here for? What’s my purpose?” he recalls.

The answer came at Passion 2006. “That was my first experience with corporate worship on a bigger scale. It’s funny, because I really was clueless and just kind of a sponge, wide-eyed, taking it all in,” Patrick says of the conference. “I felt like that’s when the Lord was showing me, ‘This is how you could use music for the Church. If you wanted to do this, I think this would be a cool way for you to use your music.’ So I fell in love with worship music.”

When he got home from Passion, he headed straight to his local Christian bookstore to purchase his first Christian CD, an album by Chris Tomlin. “I think it was, hands down, the most influential record of my life,” Patrick confesses, “because I’d never heard anything like that before.”

That Tomlin record instilled a hunger for worship in Patrick, who continued to hone his songwriting skills and began leading worship at his local college ministry. Eventually, a call to Soul City Church in Chicago led him away from Tennessee, but still, the husband and father continued to write and soon began building an arsenal of demos initially intended to teach his church band how to play the original songs he was crafting.

“I felt like in Chicago I was creating in a vacuum,” Patrick observes. “I don’t feel like the writing culture in worship that exists now was as prevalent 15 years ago.”

The Call to Centricity Music

Following an offer from a friend, Patrick Mayberry attended Centricity’s invitation-only artist retreat in Washington, held every two years. It was there where he met some kindred spirits and future collaborators. “It’s like I found my people. It was like Niagara Falls to my soul,” he says of the week-long event. “I had all these things in common with these people. They were into the same recording gear I was into, and they were interested in the same music. It was unbelievable. I didn’t want it to end.”

A publishing deal with Centricity followed a few months later, affirming his talent as a lyricist. Yet, Patrick continued to wrestle with even entertaining the thought of transitioning from songwriter to artist. He felt stuck, if not ill-prepared.

“I think I was waiting for somebody who was really good at being an artist and that I respected to tell me, ‘Hey, you’re good at this.’ I didn’t think I was good enough. That will probably be something I always carry with me,” he confesses. “I’m definitely not as qualified or as polished as some people, and I feel like, in some ways, I self-sabotaged this thing that the Lord was interested in doing in my life.”

Regardless, little by little, Patrick received confirmation that he was meant to personally steward some of the songs he was writing. “Really, God’s been doing a lot in me the last year to reshape and rewire how I think about myself and also how He thinks about me,” he admits. 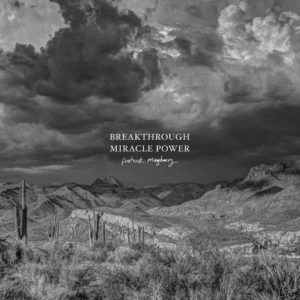 Patrick Mayberry’s debut single, “Breakthrough Miracle Power,” was conceived as Patrick continued to wrestle with feelings of inadequacy that were at odds with a clear calling from God to pursue the path of an artist. He also had some friends in the back of his mind who needed a breakthrough—one who was struggling in a marriage, another who was battling debilitating back pain—two examples of how life never stops being hard.

“It started on my own, and it was super personal,” he says of writing the building anthem that will serve as his official introduction as an artist with Centricity Music. “It’s essentially a desperate song of when your back’s against the wall and there’s no way out, and, ultimately you’re just desperate for the Lord to show up.”

Patrick asked Capitol CMG writer Bede Benjamin-Korporaal to help him finish the track. In a full circle moment, his demo ended up in the hands of the Passion camp, who instantly fell in love with the vulnerable, pleading lyric. Already leading the song at Atlanta’s Passion City Church, Kristian Stanfill and Mayberry rewrote the bridge.

Patrick’s earnest vocal on the song implores God to do what only He can do. But, for the humble songwriter, “Breakthrough Miracle Power” is more than a raw prayer petitioning a divine move of God. It’s the culmination of years of doubt, hard work and obedience.

“I feel like I’m getting to put the flag in the moon, because to me, it’s not just this song; it’s the last 10 years of traveling back and forth to Franklin, staying up way too late working on demos, and being a grumpy dad in the morning because I stayed up too late,” he shares. “There’s been a lot of sweat equity, and this song is kind of the Ebenezer that marks the start of something really beautiful that’s come from all of that.” 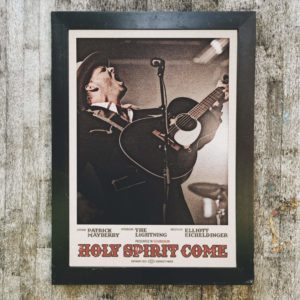 On September 17, 2021, Patrick Mayberry released his debut Centricity Music concept music video and Air1-premiered it. “Holy Spirit Come” is remarkably beautiful, and truly conveys the message of the hope and faith that resides in all of us.

“This is one track we have been waiting for, and one you will be playing on repeat as you sing the words, O Holy Spirit come!” exclaims Air1. “‘Holy Spirit Come’ is a high-energy invitation for the presence of God to dwell among the Church,” adds Worship Leader.

Through this diligent pursuit of faith and music, Patrick has crafted songs steeped in community and with a language that does inspire a wide spectrum of worshippers to join in this heavenward chorus.