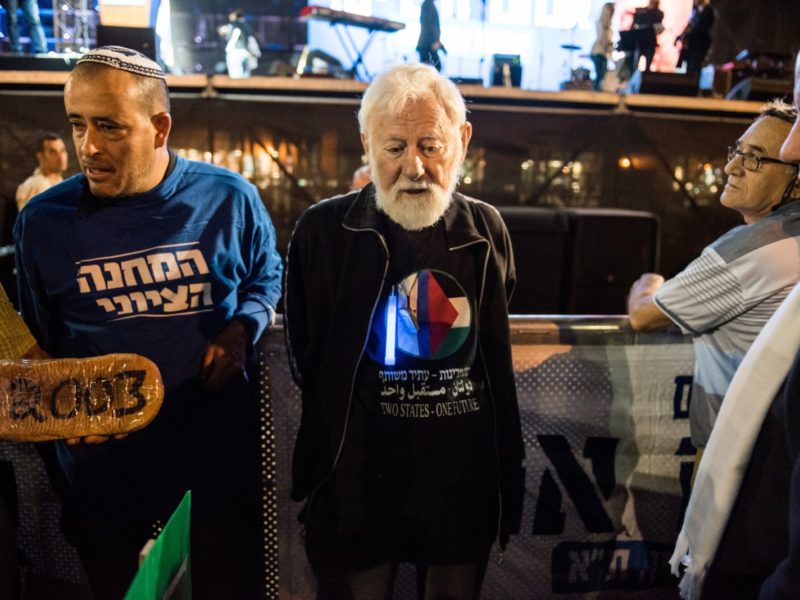 The spiritual father of the Israeli Left, Uri Avnery, believed in the possibility of peace with the Palestinians until his final days.

The veteran peace activist passed away Monday morning in a Tel Aviv hospital, two weeks after being admitted due to a stroke. In his 94  years, he had been at the forefront of the Israeli peace camp, a vocal critic of the use of military force and a stringent defender of the rights of the Arab minority.

Yet Avnery always considered himself a Zionist and in this regard was part of the Israeli establishment he sharply criticized from the state’s earliest days.

He was born Helmut Ostermann in Beckum, Germany in 1923, to a well established Jewish family. Shortly after Adolf Hitler’s rise to power in 1933, he and his family emigrated to what was then Mandatory Palestine. He joined the Irgun, a right-wing Zionist paramilitary organization in 1938, but after being deemed too young to fight, he wrote some of their internal publications. Avnery left the Irgun in 1941, after becoming disenchanted with the group’s  tactics.

“I didn’t like the methods of terror applied by the Irgun at the time”, he said in a 2003 interview, referring to the Irgun killing Palestinians in retaliation to similar acts by the Arabs.

In the years leading up to the 1948 War of Independence, Avnery began developing his political ideology, which drew heavily from Canaanism, an ideology that espoused the creation of a Hebrew nation. In 1947 he published a proposal to unite Palestine, Transjordan, Lebanon, Syria and Iraq into a single entity – the ‘Semitic Region.’

With the outbreak of the 1948 War of Independence, Avnery joined the Haganah, the precursor of the Israel Defense Forces, and fought among the ranks of the Givati commando brigade. Towards the end of the war, he was seriously wounded in a battle with Egyptian forces near Ashkelon. He spent the final months of the war in rehabilitation and was discharged in the summer of 1949.

A year after the war, Avnery published a series of his accounts from the front lines in the Haaretz daily, which were later released as the book “In the Fields of Philistia”.

in 1950, using his disability funds from the Defense Ministry,  Avnery bought the failing magazine HaOlam HaZeh(“This World”), and edited it throughout the 50s and 60s. It quickly gained prominence as a fierce, anti-establishment tabloid, exposing corruptions and scandals. It remained in circulation for nearly 40 years.

In 1965 Avnery founded the “Olam Hazeh – Koach Hadash” party, which he later claimed to be the first “Green Party” in the world. The party gained one seat in the Sixth Knesset, and Avnery began serving as a Knesset Member in 1965 until 1974 and again from 1979-81, this time with The Left Camp of Israel party.

During the Six-Day War, he published an open letter to the Prime Minister, Levi Eshkol asking  him to give the Palestinian people the opportunity to create their own state. This idea became his central theme since 1967 and the subject of hundreds of his speeches and initiatives in the Knesset.

Avnery’s most dramatic act was to meet with PLO leader Yasser Arafat, in Beirut in 1982 in the midst of the first Lebanon War, leading to calls for him to be charged with treason. However, the Attorney General decided, in the end, that Avnery had not committed any crime.

In 1993 Avnery established Gush Shalom (Peace Bloc),  an Israeli peace activist group calling for the creation of the State of Palestine in all the West Bank and the Gaza Strip, and the recognition of Jerusalem as the joint capital of both states. Since its creation, it has organized hundreds of demonstrations and other political actions.

Avnery wrote for the Haaretz newspaper and a weekly column for Gush Shalom until almost his last day. The last article he published referred to the recently passed Nation State Law.

“(Once ) I had a friendly discussion with Ariel Sharon.” he wrote, “ I told him I am first of all an Israeli. After that, I am a Jew. He responded heatedly that he is, first of all, a Jew, and only after that an Israeli! That may look like an abstract debate. But in reality, this is the question that lies at the heart of all our basic problems. It is the core of the crisis which is now rending Israel apart.”  he wrote.

On Monday morning, voices from across the Israeli political spectrum paid their respects.

“In the days of fighting for Israel’s independence, Uri Avnery fought among the ranks of the Irgun, and later took on the challenging role of the eternal opposition,” wrote President Reuven Rivlin. “Avnery held to the words of Jabotinsky – ‘silence is despicable’, and his fight for the state’s recognition of the Irgun fighters, as well as his fight for freedom of speech, blazed the trail for Israel as a young state.”

“Uri Avnery, may he rest in peace, was a courageous journalist, and a rare, trailblazing person,” wrote Opposition Leader MK Tzipi Livni. “He stood up for what he believed was right despite the attacks against him, and instilled in the hearts of Israel the ideas of peace and moderation, even when they were not part of the lexicon, with a clear and sharp resolution, which he maintained until the day he died. Israel will miss him. May he rest in peace.”

Labor Party Chairman Avi Gabbay said: “As a young man, I read Uri Avnery’s Haolam HaZeh and I always felt that they were words of truth. For me, Uri Avnery taught us to look at life also from the other side’s perspective. We don’t have to agree, but we should know and understand. Rest in peace.”

Former Likud Education Minister Gideon Sa’ar wrote: “A young Uri Avnery joined the Irgun and fought for the Givati Brigade in our nation’s war for independence. Avnery was far from me and people like me, like the distance between East and West, and his words and actions have infuriated me more than once.  But in the young State of Israel, he was an example of a fearless opposition, during the days that it was difficult to be an opposition to Mapai’s rule, who persecuted him. There is no democracy without opposition.”

Joint Arab List Chairman Ayman Odeh wrote: “We mourn the passing of Uri Avnery, a beloved man who devoted his life to peace, to a better future for the two nations, and to the establishment of a Palestinian state. His voice, as well as his idea and world view, will continue to resonate even after his passing.

Joint List MK Ahmad Tibi wrote: “May your memory be blessed, my friend, Uri Avnery. Your passing, just as it is painful, accurately reflects the current character of Israel: with no longing for peace, equality, coexistence and freedom of speech. You will be missed.”

Yona Schnitzer and Mara Vigevani contributed to this article.

For just $100 per month you can bring the gospel to 10,000 homes. Join us as media missionaries! GIVE NOW
VIEW COMMENTS
« Bolton: US Expects Europe To Take Stronger Steps Against Iran The Amazing Power of Your Testimony to Transform Others »