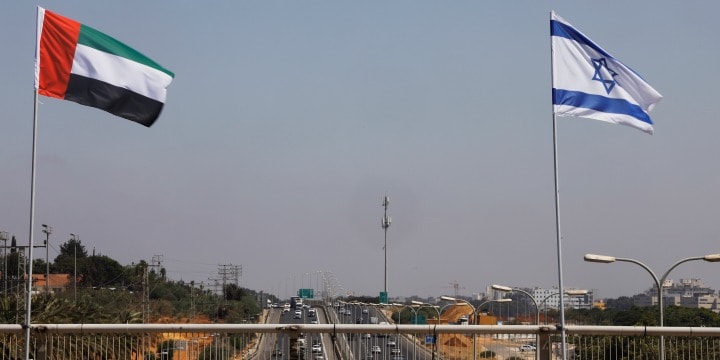 The historic El Al flight that took off Monday morning from Israel for the United Arab Emirates (UAE) is receiving a lot of attention in the Arab world and is provoking many reactions on social media.

The reactions reveal, as expected, large differences between the sympathetic attitude and welcoming in the Gulf and the Emirates, as opposed to the sharp reactions from opponents of the agreement including the Palestinians, supporters of Islamic organizations and the like.

Al Jazeera is covering the historic event in a matter-of-fact manner, emphasizing the word “peace” written in the three languages ​​aboard the 971 El Al flight.

Al-Jazeera noted that the flight flew over the skies of Saudi Arabia and the headline read “Normal flight from Israel to the Emirates”, without mentioning the word “peace agreement.”

Al-Arabiya wrote in the headline that “Israel hopes for a better future following relations with the Emirates” while Sky news in Arabic wrote “Western commentator’s assessment: The peace agreement between the Emirates and Israel is a strategic victory.”

On the other hand, the Arabi 21 website, which is affiliated with the Muslim Brotherhood, wrote in the headline: “This is what was written on the first Israeli plane that flew Israelis to the Emirates.”

The site was referring to the plane’s name, Kiryat Gat, and claimed that it was built on the ruins of the Palestinian town of Fallujah, whose residents were deported during the 1948 War of Independence.

Another headline on the Arabi 21 website stated that “the agreement with the Emirates will now allow Jews to pray in mosques in Jerusalem.”

On social media, the EL AL flight receives a great deal of attention, and there is an apparent gap between the hashtag “Normalization_Traitor”, which is being echoed by Palestinians, supporters of Hamas and Hezbollah, compared to the hashtag “Emirates – the country of Peace ” echoed by supporters of the agreement.

The media and residents of the Emirates and the Gulf, in general, are going out of their way to greet Israel and many have published the flags of Israel and the United Arab Emirates under the hashtag “Welcome to the Emirates, State of Peace.”

Throughout the Gulf, and especially in the Emirates, many expressions of friendship can be found, especially following the lifting of the boycott of Israel by the UAE on Saturday.

Particularly notable is the response of the UAE Ministry of Defense, which welcomes “our Israeli friends, an advanced and flourishing country.”

Many surfers, including residents of the Gulf, wrote on social media that “this is not a peace agreement but the survival exercises of the President of the United States ahead of the election.”

Many surfers expressed their opposition while emphasizing the permit that Saudi Arabia gave Israel to fly over its territory. One of the surfers noted that this is being done while Qataris are not allowed to fly over the skies of Saudi Arabia.

Arab surfers also referred to the flight from the Palestinian point of view, including those who sharply attacked the “colorful ceremonies while the houses of Gaza are completely destroyed.”

Hamas websites and tweets from its supporters also stated that “the plane takes off from Palestine over Saudi Arabia to the Emirates” and the caption Kiryat Gat on the plane received a lot of attention and criticism and some surfers used the hashtag “Palestinian Nakba.”

Surfers wished for the El Al flight to explode in the air “even though it is equipped with Israeli defense systems.”

The explosion that occurred at the KFC restaurant in Dubai, shortly after the take-off of the Israeli plane from Ben Gurion Airport, is also receiving a lot of attention on the networks, while surfers write that “it is a curse on the Emirates.”

Palestinian Authority Prime Minister Muhamad Ashtayyeh is quoted in the local media as saying that “it hurts us very much today that we see the landing of an Israeli plane in the Emirates in clear violation of the Arab position regarding the Arab-Israeli conflict. We take this opportunity to salute the Arab positions that reject the normalization with Israel while failing [US Secretary of State Mike] Pompeo’s mission, despite the pressure exerted on some Arab countries.”

Maher Mazaher, one of the leaders of the Popular Front for the Liberation of Palestine (PFLP) in the Gaza Strip, said that “the landing of the plane will not change reality, and the main enemy of the Arab nation and its territories in the Gulf will remain the Zionist enemy.”

“The agreement is a free gift offered by the traitor, Muhammad bin Zayed, to the enemies Trump and Netanyahu, and is a stabbing and betrayal of the blood of the Arab martyrs who shed their blood. “

For just $100 per month you can bring the gospel to 10,000 homes. Join us as media missionaries! GIVE NOW
VIEW COMMENTS
« Love, Unity, And Peace: Pray For That At This Time The Warning In The Book Of Proverbs You Should Never Ignore »