BREAKING
Israel-led Team Solves Mystery Why Lightning Strikes Fewer Times Over The Ocean...
Tourism In The Holy Land Is Soaring Back Up To Pre-Pandemic Highs
Lapid Speaks Directly To Palestinians—Offers Them “Another Way” Out Of The Ongoing...
Home Articles Police Arrests Arab For Desecration Of Jewish Graves On Mount Of Olives 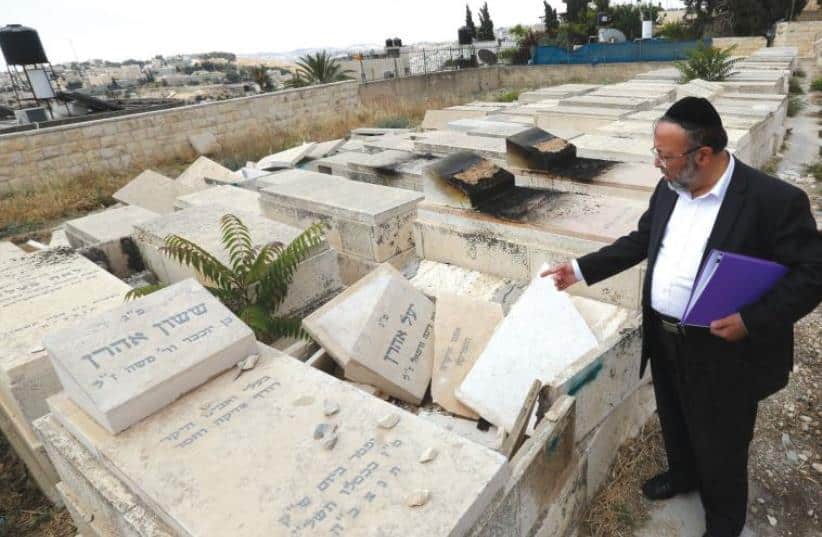 Jerusalem’s Police on Wednesday arrested a 20-year-old Arab resident of the city on suspicion that during the previous night he ran with another Arab on Jewish graves in the Mount of Olives cemetery and documented himself and his friend and published the documentation on social media.

The police statement said that “the suspect was arrested after a number of quick investigations, which led to his identification. The suspect is being questioned by the police on suspicion of insulting religion, and the investigation is continuing with the aim of reaching the other people involved.”

Director-General of the Cemetery Council Rabbi Tzuriel Krispel thanked the police for “the speed with which the man was caught, documenting himself desecrating the tombs of the righteous buried on the Mount of Olives.”

The police’s “rapid activity is part of a huge revolution that the Cemeteries Council has been a part of, which has brought about a change from end to end in terms of guarding the tombs on the Mount of Olives and preventing vandalism, and increasing the sense of security at the Mount of Olives,” he said.

The Mount of Olives Jewish cemetery is the oldest Jewish cemetery in the world, dating back 3,000 years to the time of the First Temple – and is still in use today. It houses some 70,000 tombs from different historical eras, including the graves of many prominent rabbis, writers, and political leaders.

The cemetery is surrounded by Arab neighborhoods of A-Tur, Ras Al-Amud and Al-Sawana. Israelis have been targeted over the years in and near these neighborhoods while making their way to visit the cemetery.

Additionally, many graves have been torched, smashed, or sprayed with graffiti and reoccurring vandalism attacks.