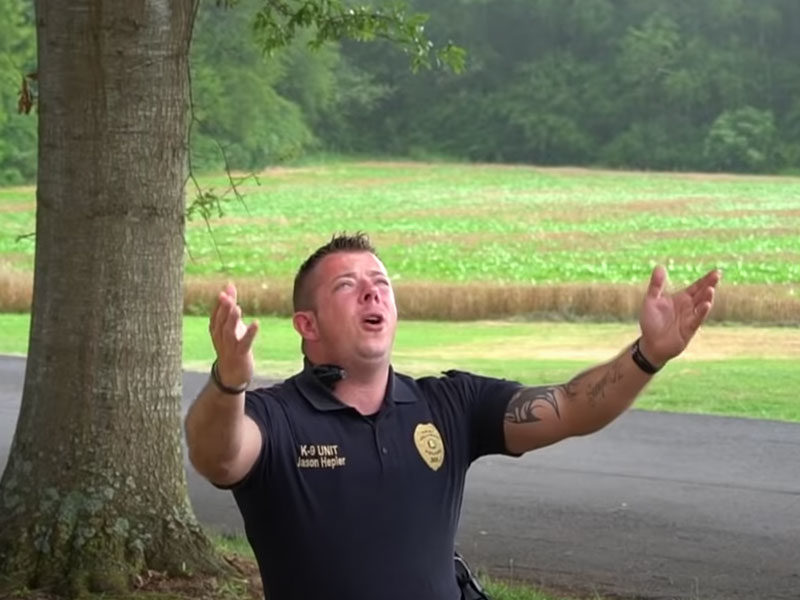 While videos of police officers are circulating online for the police department’s lip-sync challenge, one police officer from Alabama chose to honor God with a faith-based song, ‘I Can Only Imagine’ for his entry.

I Can Only Imagine In Lip-Sync Battle

Chief Jason Hepler and his K9 Fox from The Hollywood, Alabama Police Department joined the lip sync challenge. While there may be many songs, they did MercyMe’s hit Christian song ‘I Can Only Imagine.’

Wearing the K-9 unit uniform with the dog beside him, officer Jason belted out the powerful song’s verses. Then the best part of the video came when he reached this lyric:

Surrounded by Your glory
What will my heart feel
Will I dance for You Jesus
Or in awe of You be still
Will I stand in Your presence
To my knees will I fall
Will I sing hallelujah
Will I be able to speak at all?
I can only imagine

The police officer did not hesitate to show his sincerity to what the worship song speaks, even if he was doing lip-sync. He placed his hands on his heart, raised his hands high, and went down on his knees to worship God.

Moreover, the video showed America’s flag and appeared to have been recorded in different areas within the police department.

The video touched the hearts of many as it has now reached more than 600,000 views on YouTube.

D Paul, a user who got emotional watching the video, wrote, “ok this made me cry….you guys put your lives on the line every day. I can only imagine was the perfect song….thank you for your service.”

Another also commended the officer for boldly choosing a song that honors God. She wrote, “I have been watching a lot of these police officer lip sync videos but this is the best one yet! It’s the only one so far that I have seen honoring God. Thank you for not being ashamed of Jesus!”

Indeed, God is glorified in the police officer’s decision to make God the center of the challenge.

For just $100 per month you can bring the gospel to 10,000 homes. Join us as media missionaries! GIVE NOW
VIEW COMMENTS
« Hulk Hogan Says Jesus Is the “Only Thing That’s Real” God’s Word For You Today: Guard Your Heart With All Diligence »