BREAKING
Israel-led Team Solves Mystery Why Lightning Strikes Fewer Times Over The Ocean...
Tourism In The Holy Land Is Soaring Back Up To Pre-Pandemic Highs
Lapid Speaks Directly To Palestinians—Offers Them “Another Way” Out Of The Ongoing...
Home Featured Police Officers Save Lives After SUV Bursts Into Flames As It Crashed Into A Building 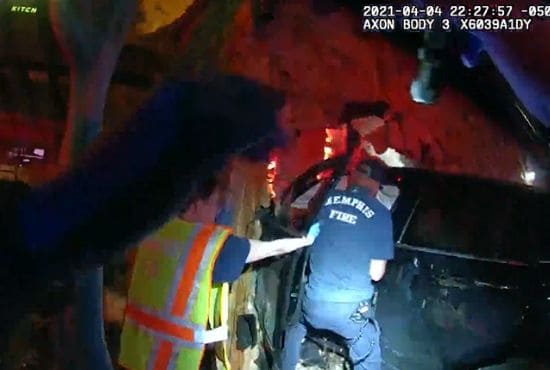 Police officers save lives after an SUV burst into flames as it crashed into the wall of a building.

A video from a 2021 Memphis, Tennessee accident was recently released. It shows how police officers raced against time to save a driver and his passenger trapped in a burning vehicle. The entire situation was recorded on a cop’s bodycam.

On April 2, 2021, an SUV went out of control and crashed into an Olive Garden. It crashed so hard that it went through a concrete wall. Thankfully, a refrigerator stopped the vehicle from continuing into the dining room where customers sitting. However, the vehicle burst into flames because of the impact. One of the first responders to the scene is Officer Justin Knox.

The driver of the SUV and his passenger was trapped inside the vehicle. As the flames quickly engulfed the fire, the cops raced against time to save the two people.

“In those moments, you don’t have time to think, you just have to burst into action,” he said in an interview. “I was truly thankful the car didn’t burst into complete flames. That’s typically what happens.”

Knox has just joined the police authorities when the incident happened. Though he doesn’t want to be recognized for his heroic action, he was acknowledged by the authorities as a hero.

“It’s a calling,” the rookie cop said. “It’s truly a calling to represent this city to go out and risk my life for other people’s lives.”