There is a Group of Praying Wives on the Loose in Ghana! Join the Movement! | GOD TV
Faith 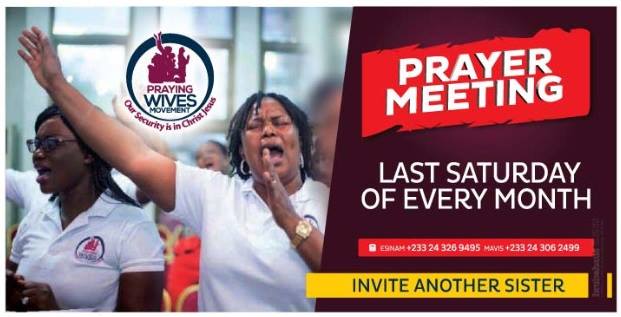 There is a Group of Praying Wives on the Loose in Ghana!

Praying Wives Movement (PWM) is the name of the prayer ministry I founded in January 2015, I was had gone through a season where God had shown me the how I had made marriage an idol in my life, specifically the god of happiness and fulfillment.

PWM started as a group of 30 on the most popular social media platform in Ghana, West Africa- WHATSAPP. As at August 2017, we are 382 women on the platform from across the world, with monthly prayer meetings on the last Saturday of every month held in Ghana.

The core of Praying Wives Movement is based on two distinct encounters with Jesus in the bible, which emphasise on making Jesus the very core and eternal solution to your life and the power of fellowship.

The woman at the well is the first encounter (John 4:7-26). Think about it, what would make a woman marry and divorce five men, then even after the fifth failed marriage, go for a live-in boyfriend.

You would think after the third husband, she would be done with men and marriage! But the lesson of this story, is how we are like this woman. She is looking for something these men can never fulfill. She knows there is something inside her that longs to be fulfilled, and man after man, she says to herself ‘maybe he will do it for me, maybe this is happiness’. We do the same, as we look for fulfilment in everything from marriage, to our kids, to career, certificates, moving from one spouse to the other never learning the lesson that they will never fulfil and will always disappoint.

As Jesus told her so aptly, ‘“Everyone who drinks this water will be thirsty again, but whoever drinks the water I give them will never thirst”.

When you truly ask and truly receive Christ, He shall be all you could ever need, you will release husbands, children, and career, from the task of fulfilling a role they were never intended for.

That is the journey of every praying wife, to be discipled to go after the One who promises that those who thirst and hunger for righteousness will be filled. Women who have made Christ Jesus their security, this is the movement we are growing!

The second encounter is the one, where four friends cut a hole in the roof of a house where Jesus was ministering (Mark 2:1-12). They slowly lowered their friend down the rooftop into the presence of the Healer Himself. Verse 4 says that Jesus “saw their faith.” Because of this show of faith Jesus granted forgiveness immediately, and healed the man based NOT on his faith, but on the faith of his friends. That is the second core essence of praying wives, where we go to the God of Hope not for ourselves but for each other, where we surround a sister, and pray for her, as we would wish someone would pray for us. A sisterhood of not letting anyone go alone, but standing together in love. A sisterhood, where everyone discovers their gifts and uses it to bless another. We insist on understanding that you are gifted and your gifts are needed by another sister to build, restore and encourage. “Bear one another’s burden, and so fulfill the law of Christ” (Gal. 6:1).

What we, the praying wives, are able to do on WhatsApp, is to share the word everyday with each other, as a woman is selected each day/week to lead the group by sharing a word. We are divided into sub groups based on location, the objective is clearly defined, to build a sense of community where we are learning about our Heavenly Father each day, growing and building our faith through identity and fellowship.

The woman is essential, touch a woman’s life and you have touched the whole family and generations to come, Eve was given the apple first for a reason, and the story keeps repeating itself.

The life of the average African woman is so different from 30 years ago, now she is expected to be both a career woman and manage the household, many are earning more than their husbands, or even managing the home all on their own. This is causing pressure and burdens on these women that were not as common a generation ago.

According to a news article filed in 2015 (please see Adjassah, A. (2015). Divorce Rates High in Churches) the head pastor of Assemblies of God Church, Ghana, Reverend David Nabegmado, had bemoaned the alarming rate of divorce in the church. The article mentions a report by Ghana Statistical Service indicating that in 2014 alone, 600,000 marriages had collapsed.

The fruit of divorce, broken homes and a lost generation is being offered to the woman.

A movement dedicated to changing a woman’s view on who she is in Christ, can curtail this attack on the Christian marriage. When women actively seek the will of God for their marriages, when they are concerned about the eternal destination of their spouse’s soul, not whether they are cheaters or loyal, where women are praying for their daughters and teaching them how to be Godly wives both by word and by deed. That is Praying Wives Movement.

Over the years, Christianity seems to be cast as against women’s rights, but a study of Jesus, shows a God who values His princesses, one story after the other.

Women can start such groups all over the world, Lou Engle said there is an uprising of Esthers and Deborahs, this is true! Women have never been needed more in the Christian war, than at a time like this, where identity is stemmed in body size, beauty, wealth, marriage, romantic love and other false idols, all targeted at a princess who is living as a pauper.

There have been testimonies of lives changed because the work started from the inside out! More focus on prayer and the word, have led to testimonies that have seen women change their focus and sense of identity radically affecting every area of their life. Seek ye first the Kingdom of God and Hs righteousness and all other things shall be given unto thee!

A movement of women who know their identity and strong fellowship is the uprising we need!

For just $100 per month you can bring the gospel to 10,000 homes. Join us as media missionaries! GIVE NOW
VIEW COMMENTS
« WATCH: Brain-Dead Pregnant Woman Kept on Life Support for 123 Days to Save Miracle Twins Caution! You May Be Speaking Curses Into Your Life »