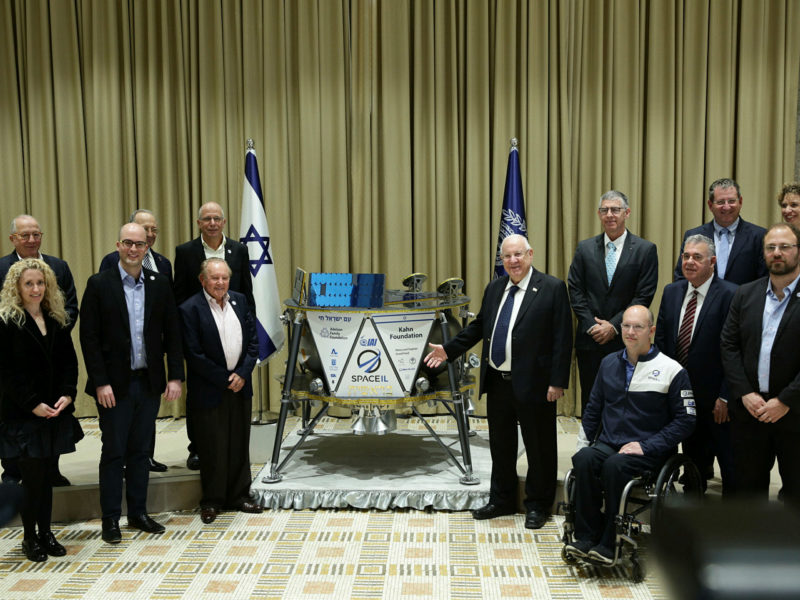 President Reuven Rivlin on Sunday kicked-off the countdown for the launch of Beresheit (Genesis), the first Israeli spacecraft to be sent to the moon, which will blast off on Tuesday.

Project SpaceIL, which has developed the spacecraft, was launched as a national project at Beit HaNasi, with its president, Morris Kahan, endowing the project to the State of Israel just days ahead of its historic launch into space.

Rivlin was presented with a copy of a time capsule that will travel to the moon with the first Israeli spacecraft. The time capsule consists of three discs, each containing hundreds of digital files, including Israeli national symbols like Israel’s Declaration of Independence, the Bible, Israel’s national anthem “Hatikvah” and the Israeli flag.

“This is a defining moment, and in two days the first Israeli spacecraft will be launched to the moon,” Rivlin stated at the event. “Until now, only the superpowers – the United States, the former Soviet Union and China – have landed on the moon. If all goes well, the small and young State of Israel will be the fourth country in history to land a spacecraft on the moon.”

The spacecraft successfully completed a series of recent tests to examine the integration of systems and a series of complex experiments aimed at testing its durability and has already been transferred to launching pad at Cape Canaveral, Florida.

Beresheit, the smallest ever to land on the moon, will launch alongside other satellites as a secondary payload on a SpaceX Falcon 9 rocket.

The spacecraft will remain on the Moon indefinitely, even after completing Israel’s first lunar mission.

For just $100 per month you can bring the gospel to 10,000 homes. Join us as media missionaries! GIVE NOW
VIEW COMMENTS
« Israeli President Draws on Bible for Lessons in Democracy Wife Of Aurora Shooting Victim Clings To Faith After Brutal Tragedy »