Bullied Girl With Down Syndrome Supported By Her Nation’s President 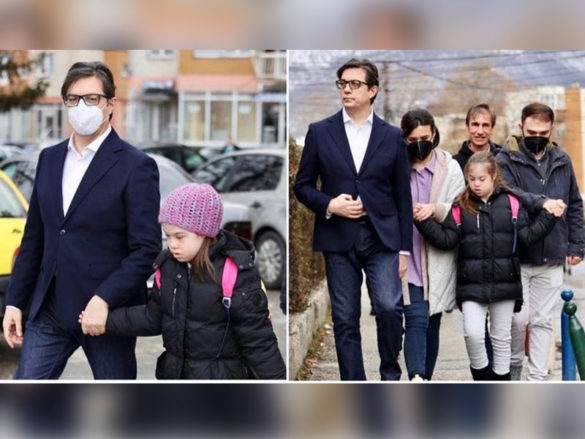 President of North Macedonia sparked international applause after going out of his way to personally encourage the bullied little girl with down syndrome.

Bullied Little Girl With Down Syndrome

The 11-year-old, Embla Ademi, suffered from bullying and discrimination in her school because of her condition. She has down syndrome, and the President of North Macedonia took notice after some parents purportedly complained about her presence in a classroom with their kids.

According to WICD-TV, the president also personally escorted Embla to school on Feb.7. The captured photo revealed the two walking hand-in-hand in Gostivar City on the way to the school with her family.

President Stevo Pendraovski of North Macedonia has personally escorted Embla Ademi, an 11-year-old girl with Down’s syndrome, to school after hearing she was being bullied. pic.twitter.com/aFwlUdUEFp

The president said, “We are all equal in this society. I came to give my support and to raise awareness that inclusion is a basic principle.”

Further, President Stevo stresses that harming kids’ rights, especially those with disabilities, are unacceptable. He also stated that everyone should feel “equal and welcome” at school.

“It is our obligation, as a state. But also as individuals, and the key element in this common mission is empathy,” he said, Sky News reported.

President Stevo wanted to send a clear message to those watching how to treat those like Embla. We shouldn’t make them feel outcast. But instead, everyone should show them kindness and make them feel they belong. And he is hoping that what he did would have a lasting impact.

“It will help children like Embla,” he remarked. “But it will also help us learn from them how to sincerely rejoice, share and be in solidarity.”

“My command is this: Love each other as I have loved you. Greater love has no one than this: to lay down one’s life for one’s friends.” -John 15:12-13