Prince William at Western Wall: ‘May the God of Peace Bless this Region’ 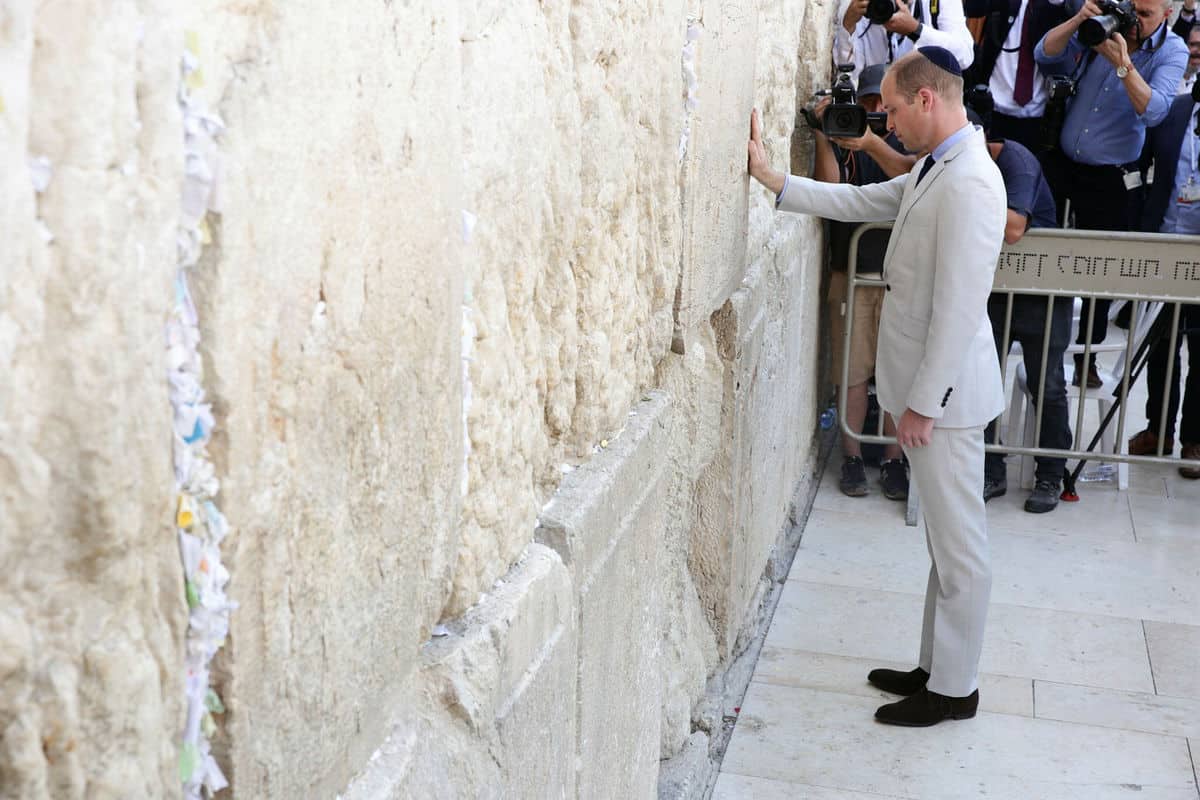 Prince William, the Duke of Cambridge, visited the Western Wall in Jerusalem on Thursday, as he concluded a five-day Middle East tour that also took place in Jordan and the Palestinian territories.

Accompanied by the Rabbi of the Wall, Shmuel Rabinowitz, and the Chief Rabbi of the United Kingdom and Commonwealth Ephraim Mirvis, the Prince signed the guestbook, writing “May the God of peace bless this region and all the world with peace.” The Prince, wearing a kippah, then stepped up alone to place a note between the stones and reflect in a moment of silent prayer. He also toured the Temple Mount, Al-Aqsa Mosque and the Dome of the Rock.

Earlier, Prince William paid his respects at the tomb of his great-grandmother, Princess Alice of Battenberg, who is interred at the Church of St Mary Magdalene on the Mount of Olives.

Princess Alice is recognized by Yad Vashem as a Righteous Among the Nations for sheltering a Greek Jewish family in Athens during World War II.

Visiting the Yad Vashem national holocaust memorial on the first day of his trip on Tuesday, Prince William wrote in the guestbook: “The actions of those few, who took great risks to help others, are a reminder of the human capacity for love and hope. I am honoured that my own great grandmother is one of these Righteous Among the Nations.”

Prior to visiting the church, the Prince received a briefing on  on the history and geography of Jerusalem’s Old City from a viewing point at the Mount of Olives.

Kensington Palace had listed the sites as being in “the Occupied Palestinian Territories,” leading Jewish Home MK Bezalel Smotrich to call upon Prime Minister Binyamin Netanyahu to prevent the British royal from visiting the Old City. Asked about the Palace’s declaration by Jerusalem Affairs Minister Zeev Elkin ahead of the visit, the  prime minister said “Jerusalem is our capital for all eternity.”

Despite tensions over the labeling of the Western Wall and east Jerusalem as being in “the Occupied Palestinian Territories,” the Prince, making the first-ever official royal visit to Israel,  stated at the British ambassador’s residence in Ramat Gan on Tuesday that “ties between the United Kingdom and Israel have never been stronger.”

The Prince will fly back to the United Kingdom later Thursday afternoon.

Written by TPS  |  Photo by Hillel