BREAKING
Israel-led Team Solves Mystery Why Lightning Strikes Fewer Times Over The Ocean...
Tourism In The Holy Land Is Soaring Back Up To Pre-Pandemic Highs
Lapid Speaks Directly To Palestinians—Offers Them “Another Way” Out Of The Ongoing...
Home News Prince William ‘Profoundly Moved’ By Visit To Yad Vashem Holocaust Memorial 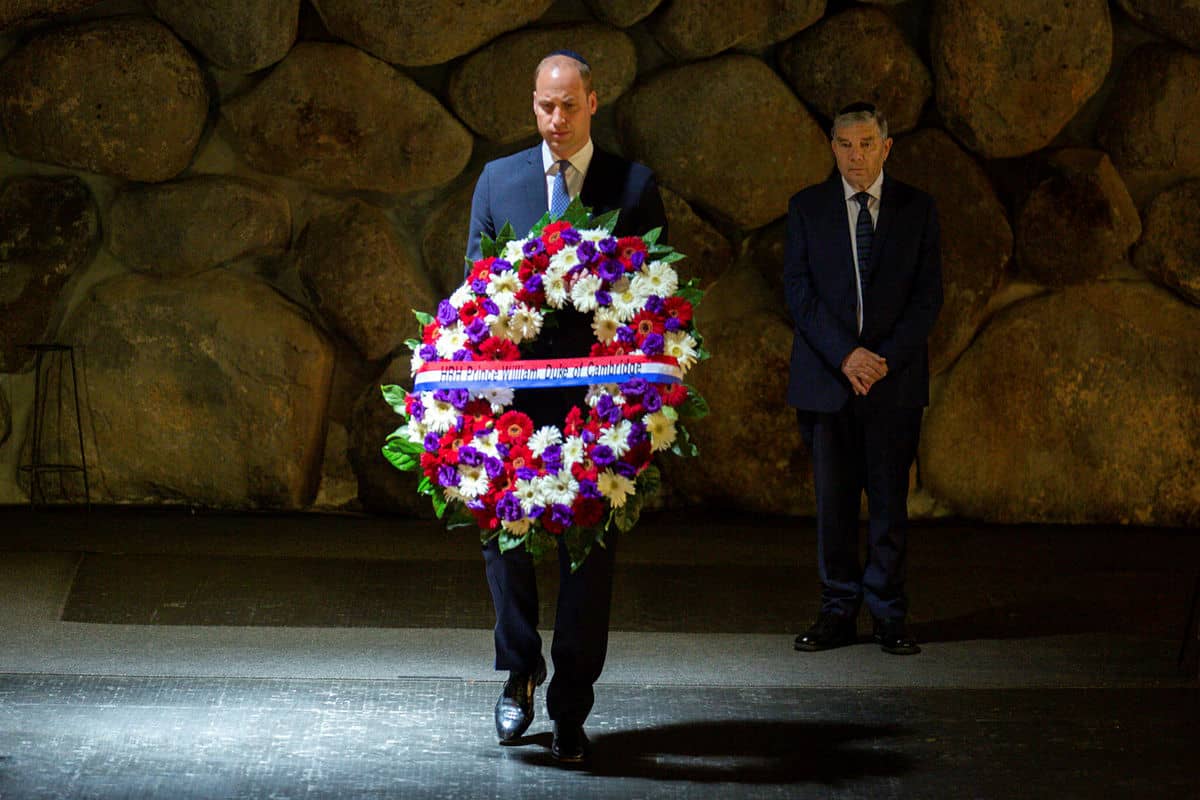 Prince William, the Duke of Cambridge, said he was “profoundly moved” after visiting the Yad Vashem national Holocaust memorial in Jerusalem on Monday June 25th on the first day of his royal visit to Israel.

Wearing a kippah and bowing his head, the Prince, who is second in line to the British throne, laid a wreath at the Hall of Remembrance, and also met with veterans of the Kindertransport – which rescued some 10,000 Jewish children from Europe, bringing them to the United Kingdom shortly before the outbreak of World War II.

The Prince was accompanied by the Chief Rabbi of the United Kingdom and Commonwealth, Ephraim Mirvis, who recited El Malei Rahamim, a Jewish memorial prayer for the souls of the dead.

“It has been a profoundly moving experience to visit Yad Vashem today,” the Duke of Cambridge wrote in the guestbook. “It is almost impossible to comprehend this appalling event in history. Every name, photograph and memory recorded here is a tragic reminder of the loss suffered by the Jewish people.

“We must never forget the Holocaust — the murder of 6 million men, women and children, simply because they were Jewish,” the Prince continued. “We all have a responsibility to remember and to teach future generations about the horrors of the past so that they can never re-occur. May the millions of Jewish people remembered by Yad Vashem never be forgotten.”

Prince William noted that his own great-grandmother, Princess Alice of Battenberg is recognized by Yad Vashem as a Righteous Among the Nations for sheltering a Greek Jewish family in Athens during World War II.

“The actions of those few, who took great risks to help others, are a reminder of the human capacity for love and hope. I am honoured that my own great grandmother is one of these Righteous Among the Nations,” he wrote.

The Duke will visit Princess Alice’s grave on the Mount of Olives on Thursday.