Prophetic Word: The Libraries Of Heaven, The Sovereign King And 'No More Delay!' | God TV
Faith 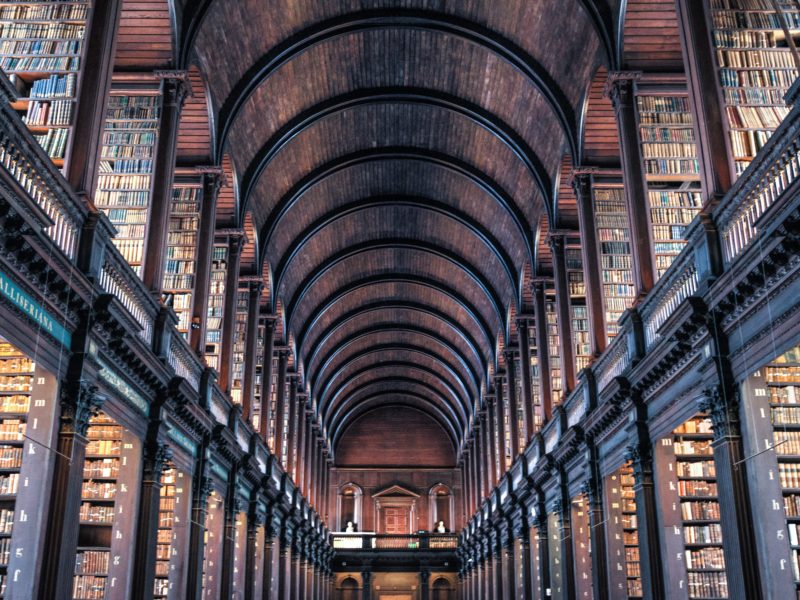 Recently, the Lord spoke these three words to me.  It was seemingly random and out of the blue.  This was not the first time I’ve heard this statement, however, as many highly respected, national prophetic leaders have been declaring this for some time now.  And yet, there was a freshness on this statement—a thunder from Heaven.  The day I received this ‘no more delay’ word was October 6 2018.  That evening, my friend (and Australian prophetic voice) Lana Vawser encouraged me to read Revelation 10:6.  The last statement of the verse simply states: “There will be no more delay!”

I believe the Lord is giving us strategies in this season to break personal prophetic delays because He is teaching us how to ultimately break the ‘great delay’ in the Earth. Delay of what? The long-prophesied outpouring of the Holy Spirit. God is not sovereignly withholding some fresh ‘dispensation’ of the Spirit; the Spirit has already been poured out (Pentecost). Could it be that the ‘delay’ we are experiencing in seeing a full manifestation of transformational revival has been caused by a people who are waiting instead of moving?

Ask for the rain

I believe the key to breaking the drought of delay is ASKING. Don’t misunderstand, this ‘Asking’ is not idle.

Zechariah 10:1 drives everything I speak, write, and prophesy in this season: “Ask for rain in the TIME of rain.”  According to Acts Chapter 2, we are living in the time of rain.  Since the Day of Pentecost, we have been living in this time of Holy Spirit outpouring; we are not waiting for an upgrade.  Zechariah 10:1 gives us the key to unlocking and experiencing what has already been made available through the three-fold work of the Incarnation, Calvary and Pentecost.

Theologically speaking, God has already made His move toward humanity. Christmas represents the Incarnation, God taking on human form to dwell among mankind. A move of God. Passover and Easter represent the death and resurrection of Jesus, the ultimate act of God breaking every barrier between Heaven and Earth – as signified by the tearing of the temple veil from top to bottom. Again, a move of God towards mankind. Finally, there is the Day of Pentecost, when God’s address changed.

Since Eden, God has longed to dwell in the midst of His people; the blood of Jesus made it possible for humanity to become His dwelling place, thus even improving upon what was available in the Garden.  Adam and Eve walked with God, but now, God lives with and within man.  Pentecost was the ultimate and final manifestation of God movement towards man, as now, His desire for a house in the Earth not made by human hands could be fulfilled.  Because of Jesus’ blood, God could now dwell within a house, redeemed humanity, that was fashioned by His own hands.

So, why aren’t we experiencing a greater manifestation of Holy Spirit rain and outpouring? Simple. We are not stewarding the prophetic words we have received by participating with them. We have put things on the shelf that God wants us to be holding close to our hearts, praying into, and ultimately, reorienting our lives to accommodate.

I’m going from micro to macro, from individual to corporate level here, as the Lord has revealed a principal to me through a supernatural encounter that ultimately explains why we are NOT seeing the fullness of outpouring in the church and reformation in the Earth.

The libraries of Heaven

This year, I had a vision of the libraries of Heaven.  I sense there are actually many rooms in these libraries, but in this vision, the Lord opened up a very specific area to me.  It was filled with beautiful books, however, the books were covered in dust—dust that looked like it had accumulated over a period of time.  I inquired, “What are these books?”

In a heartbroken tone, the Holy Spirit revealed that these were “books of unfulfilled prophecy,” and that their presence was unwelcome in Heaven. These books were meant to find manifestation in the Earth.

Many believers have put their prophetic words and promises on the shelf, when in fact, the Lord desires us to hold those words close.  “Out of sight, out of mind” becomes the case for many who neglect the precious prophetic words they received.  They end up living with a sense of lack or dissatisfaction because the very things that were meant to define their destinies have been marked “returned to sender” and sent back to Heaven. We do this when we ‘shelve’ the prophecies we receive.

Fear of the Lord and the prophetic

I prophesy a fear of the Lord is returning to the prophetic ministry – a trembling and awe that accompanies WHAT takes place in the process of prophecy.  I’m convinced we have branded a holy thing ‘common,’ as evidenced in how we have shelved many precious prophetic promises.

Consider for a moment how New Testament prophecy functions. God, the Sovereign One, Who is seated above the circle of the Earth and outside of time and space, sees glimpses of our future, shares them with prophets and prophetic people (messengers) on Earth, these people share these words with us, and what do we do?  Shelf them.  If the word confronts our natural understanding, challenge us, or doesn’t make sense, rather than pray through it or consult the Holy Spirit on a strategic for implementation, we have embraced a horrific practice called ‘shelving it.’

In the spirit, I believe when we are given legitimate prophetic words from Heaven and our response is ‘Shelving them,’ we are poorly stewarding our prophetic words and we are basically sending something back to Heaven what was meant to find both a landing place and participant on the Earth. Delay is not the result of a Sovereign God waiting for a special time for something to happen; delay is often the result of God’s people neglecting what He has said, through prayerlessness and lack of practical engagement.

The Sovereign God manifests His mercy and power

There is great hope, though!  This is also a ‘times and seasons’ word of the Lord, as the Sovereign King is stepping in.  Yes, God is reacquainting His people with His identity as the Sovereign One – the God who can do what He wants, when He wants, how He wants to, regardless of whether or not His people are playing their role in the Earth.  I believe the Lord is manifesting Himself in this manner to unveil awe and mercy.  Something about His sovereignty fills us with wonder, awe, and holy trembling; then, the very fact that He is stepping in on our behalf loudly communicates His unending mercy.

Back to the libraries in Heaven…

Though heartbroken about the amount of prophetic words stored up in this section of Heaven’s library, in a matter of seconds, the atmosphere shifted. I sensed the sovereign God step into the room and a mighty wind blew the dust off the books.

God is blowing the dust off past prophetic words and forgotten promises. Although we neglected the prophecies or even forgot the promises, God did not. He’s stepping into the library by His own volition, blowing off the dust, and re-opening those books to His people.

God is stirring His people to ask for the rain of outpouring.  We’re living in the era of rain – ever since the Heavens opened on the Day of Pentecost, it’s been raining.  Yes, history records noticeable ebbs and flows of Holy Spirit activity, but this is not because God willed it; it’s because throughout Church history, there was always a remnant who pressed in for the fullness of God’s operate to be made manifest through them. Over time, the remnant increased to where now, in the 21st Century, we have over 500 million who consider themselves Spirit-empowered followers of Jesus.  This was not always the case, particularly prior to the 20th Century.

When the Early Church became political and state run, the desert fathers broke away from the system, retreated to the wilderness and became known as those who enjoyed a unique intimacy with God.  This was demonstrated by their performing miracles and driving out demons.

During the Reformation, while a glorious theology of justification by grace through faith was restored, there were others contending for a restoration of signs, wonders, and miracles.

Even with Augustine, one who would have initially claimed to believe that the “age of miracles” had ended, this great church father witnessed multiple healings and miracles that confronted his theology and led him to conclude that this “dispensation” of apostolic power was still in operation.

Since the Day of Pentecost, God has not moved from Heaven to Earth; man has moved towards God.  We witness an increased manifestation of Holy Spirit power when we see men and women move intentionally and passionately towards God through their hunger and thirst, through their prayer and intercession, through their courageous acts of boldness and Kingdom activism.

God desires to see the drought of delay ended.  And I prophesy that every prophetic word He reminds you of in this season, and causes your heart to contend for, is not an end in itself; it’s a call for us to collectively enter into the library of Heaven and revisit the ultimate prophecy that many have shelved.  It’s God’s surefire end-times prophecy – a word concerning the ‘Last Days’ that the Lord Himself declared.  It doesn’t involve anti-Christs, New World Orders, charts, graphs, beasts marks and doomsday scenarios.  It involves rain.  It includes ‘all flesh.’  The implication of this prophecy coming to pass would be an entire planet being exposed to the outpouring of the Spirit.  For this to happen, things need to change.

We need to ask for it. The Church needs to accommodate it. The wineskin needs to be expandable. The people of God need to be interruptible.

And ultimately, as we experience this rain of revival, we cannot for a moment keep it contained to extended meetings, glory gatherings, and Holy Spirit conferences.  Yes, have gatherings, but with the clear intention of seeing people filled up and sent out into their respective spheres of influence, carrying Holy Spirit fire, power, strategy, solutions, and impact.

May this moment in history be marked by an outpouring of the Spirit to and through the Ekklesia (church) that noticeably marks society and culture. This, I believe, will be the great measuring stick of revival.  Not how many years we went with our meetings.  Not how many people came to the altars.  Not how many people fell down, shook, laughed, cried, wept, repented, etc.  All of these things are good; in fact, they should be absolutely celebrated and welcome in the Church (not merely tolerated or rejected).  But manifestations are not the litmus test of whether or not the drought of delay was broken in the Earth and we actually participated with the end-times prophecy of Acts 2.

The litmus test is Matthew 28, with the question being: Do nations look different because a Spirit-filled Ekklesia decided to challenge and interrupt the direction of history?

God desires this and this is why God Himself is sovereignly stepping in.  He is blowing the dust off the books in Heaven, and is declaring, “It’s time for fulfillment!”

For just $100 per month you can bring the gospel to 10,000 homes. Join us as media missionaries! GIVE NOW
VIEW COMMENTS
« Vegan, Veggie Or Meat Eater… Democratic Or Republican… God’s Love Breaks Down The Barriers That Divide Us Israeli Government Folds – New Elections in April »