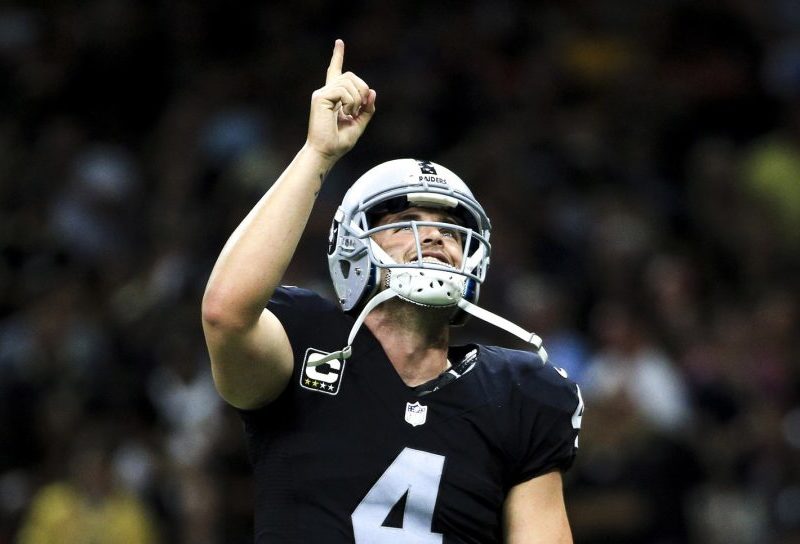 Wrists inked with Christian insignias, 26-year-old NFL star quarterback Derek Carr is more than happy to share his faith. As he penned his signature on the most lucrative contract in NFL history, he courageously displayed his relationship with Jesus for all the world to see.

Carr’s $125 million, five-year contract surpasses that of Andrew Luck, the Indianapolis Colts’ legendary quarterback – the next highest paid player in the league. After Carr signed his unprecedented contract, the press swarmed him, inquiring what he would do with his newfound riches. His humble response serves as an example of genuine Christian stewardship, untainted by the temptations of fame and fortune.

In an interview with CBS Sports, Carr revealed that he plans to live out his faith financially, responding in full to God’s scandalous grace: “The first thing I’ll do is pay my tithe like I have since I was in college, giving $700 on a scholarship check. That won’t change. I’ll do that.” If he tithes the first ten percent of his vast earnings, over $10 million will go toward furthering God’s Kingdom over the next half decade.

Carr’s commitment to tithing is Scripturally sound, though unfortunately, it is often overlooked, contested, or intentionally ignored. In Malachi 3:10, God directs his followers to “bring the whole tithe into the storehouse, that there may be food in my house. Test me in this,’ says the LORD Almighty, ‘and see if I will not throw open the floodgates of heaven and pour out so much blessing that there will not be room enough to store it.’”

Indeed, God has been faithful to Carr, as he continues to set aside the first ten percent of his skyrocketing earnings. Carr’s unchanging commitment to tithing – in the face of relative poverty and unfathomable fortune – is a real life example of Luke 16:10: “Whoever can be trusted with very little can also be trusted with very much.”

Everyone Needs An Accountability Partner

The thing is that Carr’s commitment to tithing and living out his faith has not come easy. Just because he is a Christian, he hasn’t been immune to worldly temptations and distractions. In fact, years ago, a friend wrote him a letter that served as a wake-up call. According to Derek, her letter said, “You’re not the person that I thought you were.”

As much as he hated to admit it at the time, Carr recognized the validity of her words. Then he took action, humbly asking his teammates to hold him accountable: “You guys know what I’ve been doing. I’m a Christian, and I haven’t been living it … I’m a Christian now, and I’ve asked God for his forgiveness. Now, watch how I live my lifestyle.” His teammates watched as God radically altered Derek’s lifestyle – so much so, that he eventually married the woman who wrote that incisive letter.

In an even greater display of faith, Carr’s financial plans go beyond tithing. Carr hopes to act as a conduit of God’s love, pouring out the blessings he has received onto others. Along with buying his wife something nice, Carr plans to be God’s hands and feet around the world: “The exciting thing for me money-wise, honestly, is that this money is going to help a lot of people. I’m very thankful to have it, that it’s in our hands, because it’s going to help people, not only in this country, but a lot of countries around the world.”

Carr’s outward, selfless focus stands out in a league plagued by the ills of fame and fortune. In perhaps his most inspiring statement of faith, Derek Carr posted a picture of himself in full uniform pointing up to his Heavenly Father with the caption: “What they call work I call worship! Never ashamed of whose I am and who brought me here. Yahweh is faithful to those who walk WITH him!”

May multitudes be blessed and inspired by this young man’s heart for God.

For just $100 per month you can bring the gospel to 10,000 homes. Join us as media missionaries! GIVE NOW
VIEW COMMENTS
« Someone Is Destroying Monuments of the Ten Commandments Pregnant? Here’s How to Overcome Anxiety and Fear in Pregnancy »