A rare painting depicting Jesus’s face and dating some 1,500 years came to light a year-and-a-half ago at the baptistery in the ancient Byzantine village of Shivta in the Negev Desert, southwest of Beer Sheva, according to a statement released by the University of Haifa statement on Wednesday.

The excavations, led by by Dr. Emma Maayan-Fanar, Dr. Ravit Linn, Dr. Yotam Tepper and Dr. Guy Bar-Oz as part of the Zinman Institute of Archaeology of the University of Haifa has been taking place in Shivta for several years and led to quite a few new revelations about the reasons for the collapse of Byzantine society in the Negev in the seventh century CE. But the finding of Jesus’ face painting is unusual and significant for the current project.

The discovery was first reported in August in the prestigious ‘Antiquity’ journal. 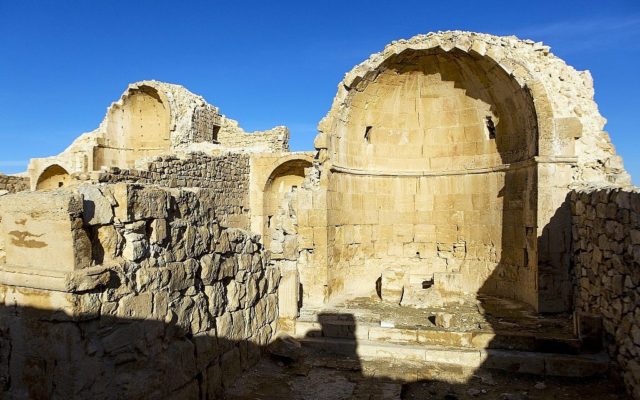 “Although the church itself has been excavated and researched for many years, the location of the painting and the fact that it was badly preserved  resulted in the researchers not noticing it,” Dr. Fanar told TPS.

Fanar related how on particularly bright day, she and Linn looked closely into a niche and were able to identify traces of the painted scene: first a pair of eyes on the apse of the baptistery adjoining the northern church, then curly hair, a nose, and a long face.

“I was in the right place at the right moment” Fanar said.

The researchers then also identified another, larger, figure larger with an aura in the painting, whom they believe is probably John the Baptist.

“The painting describes the scene of the baptism of Jesus by John the Baptist,” Fanar said.  “The location of the painting, above a baptismal basin in the form of a cross, in addition to other features, such as the location of the remains of the figures enabled us to recognize that this is the scene of Jesus’ baptism. We have no doubt that, like other scenes of baptism, this painting also had additional details that disappeared over the years.”

The painting portrays Jesus as a short-haired youth which precedes religious iconography used in the Orthodox Christian Church.

“Christ’s face in this painting is an important discovery in itself. It belongs to the iconographic scheme of a short-haired Christ, which was especially widespread in Egypt and Syria-Palestine but gone from later Byzantine art. Early sixth-century texts include polemics concerning the authenticity of Christ’s visual appearance, including his hairstyle. Based on iconography, we estimate that this scene was also painted in the sixth century AD, ” the Haifa team wrote in ‘Antiquity.’

“The discovery of this painting is extremely important. It is the only on-site  scene of Jesus’ baptism of the pre-iconoclastic period.” Fanar concluded.

Written by Mara Vigevani/TPS  |  Photo by University of Haifa (courtesy)

For just $10 per month you can bring the gospel to 1,000 homes. Join us as media missionaries! GIVE NOW
VIEW COMMENTS
« East-Med Pipeline Deal Supplying Gas From Israel To Europe To Be Signed Within Weeks 4 Ways to Hear God’s Voice When You Lack Direction »