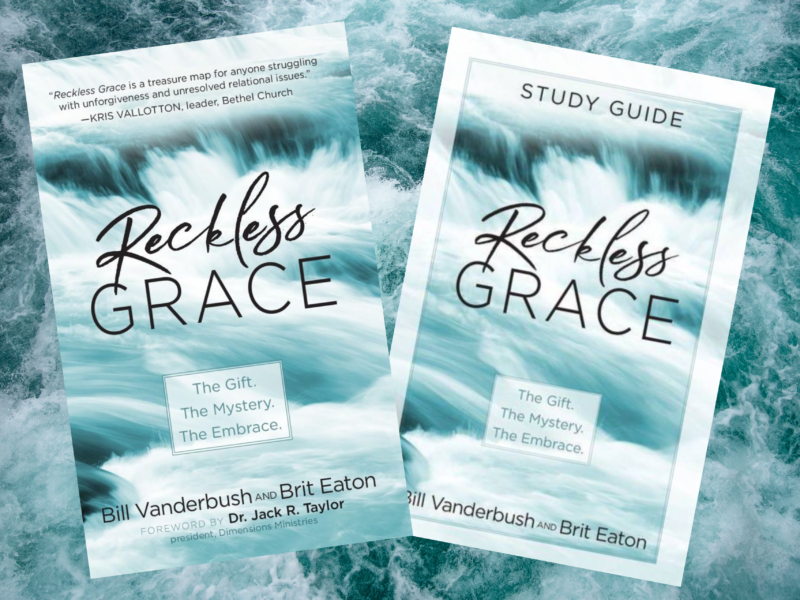 Followers of Christ understand the requirement of grace and forgiveness in their spiritual lives, but some may find it difficult to offer grace to others … especially those who have caused great harm or offense.

“Grace is not something you fall from … it is someone you fall into. It is not a license to sin but a union to God,” writes Pastor Bill Vanderbush with co-author Brit Eaton, in the book Reckless Grace – The Gift. The Mystery. The Embrace (BroadStreet Publishing).

For some grace offers an uncomfortable reality that God’s redemption can restore anyone despite their sinful past, but to others it offers hope through the guarantee of eternal salvation in Christ.

Reflecting on John 20:23 (If you forgive the sins of any, their sins have been forgiven them; if you retain the sins of any, they have been retained) when Jesus speaks to his disciples, instructing that if they have received God’s grace, then they have the power to forgive sins through the name of Jesus. What Jesus imparted may be hard to accept but He would never call us to a place we couldn’t follow. It was not in His nature to set us up for failure.

In Reckless Grace, Vanderbush and Eaton challenge readers to consider their understanding of their intentional dispensing of grace through the process of believe, receive, release, and repeat. Divided into three parts “The Grace Message,” “The Cost of Grace,” and “Grace and Glory,” the authors present a scriptural understanding of grace with biblical examples of Simon Peter, David, Moses, Hosea and Gomer and the Samaritan woman.

Grace Redefined: You must receive grace as a gift before you can give it and you must give grace as an overflow to others. Extending grace is an opportunity to come into agreement with the redeeming love of a God; who keeps no record of wrongs and commands you to love your enemies.

Grace of God: You are not just a sinner saved by grace, but you are a saint in whom dwells the Spirit of God. It’s by the grace of God that you are given a new identity but that does not come with permission for you to remain in your sin. The grace of God liberates you from the power of sin and death, so you can live free in the abundant life God calls you to.

Grace in Action: When you extend grace in the moment, it makes you aware of the glory of God surrounding your grace interactions. You will reach a point where no offense is insurmountable by the grace of God flowing through you. Grace is contagious. When others witness this, they will want it for themselves.

Bill’s cousin, Ken, was on his deathbed with just days left to live. His family had already gotten rid of his furniture and started funeral preparations. He had heard Bill wrote a new book; so from his hospice bed, he asked his sister if she would read it to him. The powerful truth of forgiveness so stirred him to the core that he ended up forgiving someone who had deeply wounded him. It was then that he experienced a sudden, deep and miraculous healing. He was able to be discharged just a few days later and return to his now empty home.

“Larry” in Rochester NY reports, “I am part of a small men’s prayer group. So much pain, infidelity, addiction, sour marriages. One day, Bill Vanderbush spoke to our group for only 17 minutes on Reckless Grace. The floodgates opened! The men could not stop talking for over two hours as they explored with new eyes this powerful call to grace. Many lives were completely transformed.”

“Steve” confided that due to stress in his marriage and raising young children, he found a connection with a co-worker of the opposite sex. What began as a friendship morphed into him seeking time with her. Before long, he found himself caught in a pornography addiction while connecting with the woman. Steve received a copy of Reckless Grace and  the book which has helped lead him back to a healthy place. He’s now reconciling with his wife and committing to strengthening the marriage he was about to end.

About the authors of Reckless Grace – Bill Vanderbush | Brit Eaton

Read the latest Christian news on the GOD TV blog.

For just $100 per month you can bring the gospel to 10,000 homes. Join us as media missionaries! GIVE NOW
VIEW COMMENTS
« God’s Word For You Today: Know That Every Situation Is An Opportunity For Us To Experience God Man Whom Tim Tebow Prayed Over At A Baseball Game Is Seizure-free »