Riding with the Breslovs: Chaos and Spirituality on a Pilgrimage to Uman | God TV
News 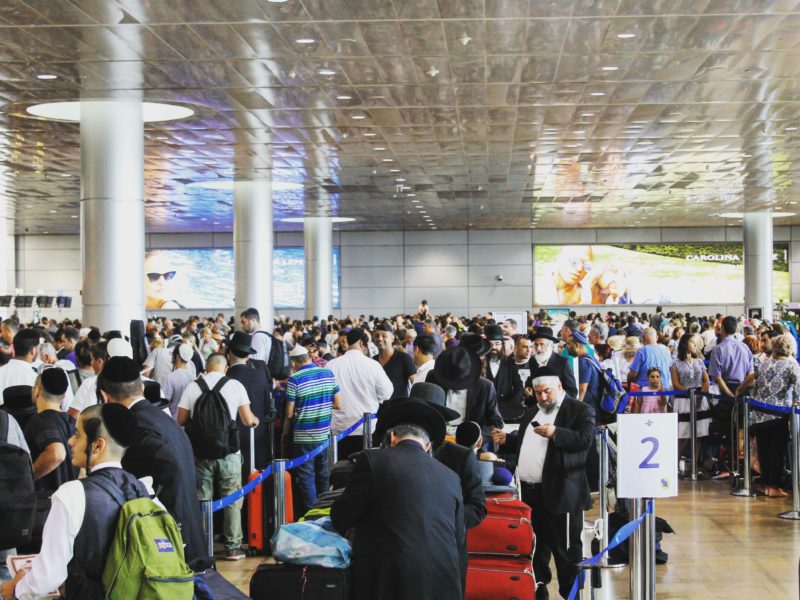 It was a scramble, you almost had to hustle to get onto the bus there were so many people.

As I walked up the stairs, I found myself caught in the sea of black. Feeling mildly out of place in my denim skirt and Yankees cap.

There was almost this feeling of organized chaos bubbling below the surface as we headed towards Ben-Gurion Airport. The entire bus was filled with Breslov Hasidim heading to Uman in the Ukraine.

For Breslov Hasidim (a branch of Hasidic Judaism), the pilgrimage to Uman plays a massive role in the way that Rosh Hashanah – the Jewish new year – is celebrated as they pray at the grave of Rabbi Nachman who founded the Breslov movement, and who is also the grandson of the Baal Shem Tov – the founder of Hasidic Judaism.

As the bus rolled on, I heard a young man shout out in agony – he’d just broken a tooth. “This is terrible timing – does anyone have a tylenol or a painkiller… The dentists in Kiev are probably awful.”

We chatted for a few minutes and he told me proudly that it was his fourth time going to Uman, for his friend sitting next to him, it was his first.

“I don’t even know where I’m going,” the friend joked.

There was some sporadic singing here and there, a buzz of excitement in the air.

As we arrived at Ben-Gurion’s Terminal 3, everyone clambered off the bus hurriedly. I continued to walk and chat with the young man who said that “Uman was the greatest experience.”

The airport is chaos, long lines, shouting, crying children, people scrambling to check their baggage in – yelling at attendants that they were late for their flights. Attendants remaining polite and calm despite the rudeness.

“Where do I check-in for Uman? We are very late,” shouted one man in Hebrew, his small children and their payot – long sidelocks – dangling as they tried to keep up.

“I’m going to New York”, “I’m flying to Hungary to catch a flight to Uman,” and a group even started arguing over whether the white “Na Nach” kippah one man was wearing, was dirty. “You can’t go to Uman looking like a schlump (Yiddish for someone who is sloppily or poorly dressed).”

“He has a small mark on the kippah, it’s not a big deal, he can,” responded another.

After almost half an hour, the young man I was with looked down at his paper and up at the departure boards. “My flight isn’t here,” he said looking worried.

“I’m going! I will buy another ticket – I’m not missing this for the world,” he says nonchalantly.

“So you’re just going to buy another ticket, just like that? Isn’t it expensive,” I question.

“No, I’m going – that’s it,” as he pulls out his laptop and starts searching for a new ticket.

We part ways and I notice a camera crew from one of the news outlets filming the lines and scenes around us.

As a group of young, vibrant and almost silly boys walk past – all in white kippot, they shout loudly with naughty smiles on their face: “Hertzel! Hertzel,” referencing a video of a news report at the Western Wall that was interrupted, which went viral earlier this year.

“Wait, your names are all Nachman?” I ask.

“Yes, that’s why we are going to Uman. We are going to pray to our name sake – to ask him to petition God on our behalf for the things we may need and pray for this Rosh Hashanah,” says the first Nachman.

“There’s no end – there’s only prayer. God is eternal – Rabbi Nachman’s teachings show us this,” says the second.

“It’s a very spiritual experience – you must go one day, you will see,” says the third, while the fourth Nachman nods in agreement.

As I continue to walk around, two men shake plastic cups in my face, asking for help to pay for their tickets to Uman.

“We have to go, there is no other choice – it is the will of Rabbi Nachman and we go each year to petition him. It’s a spiritual journey where all Jews come together, pray together and love God together,” one of the men said.