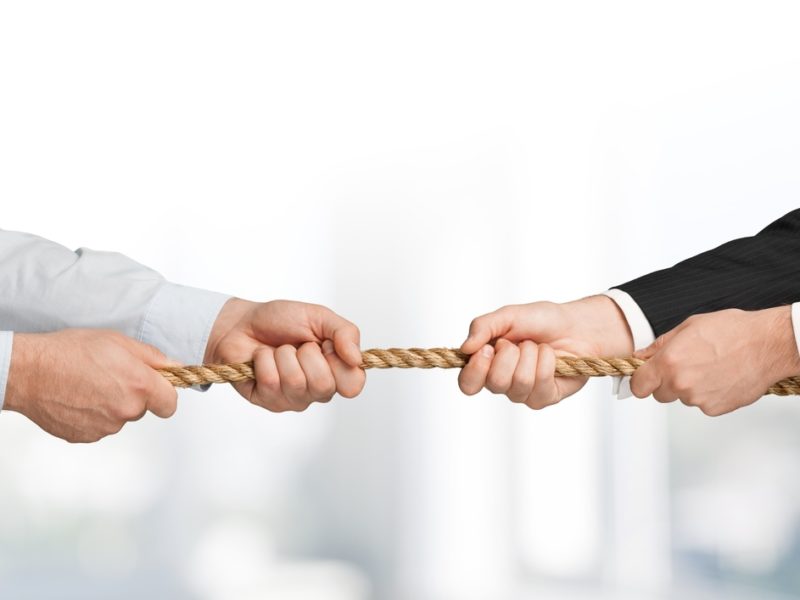 Everybody wants to be right. If you watch cable news and see a panel of “experts” debating a topic, you can hardly tell what anyone is saying as they incessantly talk over the top of one another, each trying to prove their own point. It’s not uncommon in society today to hear some vilify and defame anyone who disagrees with them, even if it means grossly misrepresenting the other person’s position and distorting their views.

Proverbs 21:2 tells us that “Every way of a man is right in his own eyes…” and Proverbs 12:15, says that even “Fools think their own way is right…” While we all want to hold to clearly revealed truth with assurance and conviction, we would all be wise to make sure that we don’t falsely believe in our own infallibility. None of us are that smart.

I think we will discover in heaven that none of us were 100% accurate about every thought, idea, and interpretation we had. While I fully embrace the Bible as God’s inspired and infallible Word, I am reminded that even Paul said, “For now we see in a mirror, dimly, but then face to face. Now I know in part, but then I shall know just as I also am known” (1 Corinthians 13:12). Though strong, bold, and fearless in his convictions, Paul remained mindful that God alone is omniscient.

When a person thinks he knows it all, arrogance and haughtiness abound. Paul said, “Knowledge puffs up, but love builds up” (1 Corinthians 8:1). In the Message version, 1 Corinthians 8:3 says, “We never really know enough until we recognize that God alone knows it all.” Norman Grubb said it well when he remarked: “Being human, we can only receive infinite truth infinite doses.”

A minister friend told me once about a service he attended. He remarked that the people were all very enthusiastic. However, he noticed something interesting about the overall atmosphere and the tone of what was conveyed. He said that much of what was said in the message and even expressed in the songs was overwhelmingly self-congratulatory. They were, in essence, singing and speaking about how wonderful they were. They were on the cutting edge. They were the ambassadors of God’s newest and freshest move. They were the custodians of God’s deepest truths. Under the guise of worshipping God and giving Him glory, they were, in reality exalting and extolling themselves most lavishly.

Gordon Lindsay wrote in his book, “God’s Twentieth-Century Barnabas,” “Some spiritual moves have been blessed of God, and then suddenly have faded away because of the presumptuous and erratic conduct of certain of the leaders. One such move occurred some years ago in America… At first, we rejoiced in this outpouring of the Spirit. But very soon we saw something develop that alarmed us. Some of the leaders were claiming that they were the ‘Powerhouse’ and all other churches ‘dried up.’ They said that people should come to them to get recharged. When we saw such bold pretensions, we realized that the usefulness of such leaders could not last long.”

We need to avoid the trap of spiritual pride, and this includes falsely believing that we are always right and everyone else is wrong. Perhaps some attempts to validate oneself are really based on deep, underlying insecurities, but nevertheless, we need to remove the false props that only boost our egos and do nothing to advance the Kingdom of God. Here are some things we may need to remind ourselves of from time to time.

1. I am not necessarily right because my church (or following) is big.

Every pastor wants to have a lot of members and multitudes of people attending weekly. No pastor enjoys preaching to empty seats. Every preacher wants many people reading his books, watching his television show, listening to his radio broadcasts or podcasts, etc. Hopefully, our motives reflect a desire to see people reached and impacted by God’s love, not because we want to bolster our egos or make ourselves look good or feel superior.

Further, if we happen to have a church of significant size or a number of people following our ministry, we must be careful not to assume that it is an absolute indicator that we are right about everything. I actually heard a minister say once, “I must be right; look how many people are following my ministry.” Islam, Buddhism, and Hinduism all have large followings, as do certain so-called “Christian” cults. A large following does not necessarily equate to accuracy or being right.

2. I am not necessarily right because my church (or following) is small.

On the other end of the spectrum, there are people who feel that they are more genuine, authentic, or holy than others because their church and/or following is not large. Some automatically assume that any large church has obviously sold out, compromised, and has diluted the truth. It stands to reason, then, that if my following is small (they say), it’s because I’m ministering to the remnant, the chosen ones, and the true believers.

The truth of the matter is that there are some great small churches and some great large churches. There are also some unhealthy small churches and some unhealthy large churches. Numbers alone are not the ultimate or absolute litmus test of anything. If you stop and think about it, the crowds that Jesus had fluctuated drastically. He wasn’t right because His crowd was large at a given time, neither was He right because His crowd was small at a given time. Jesus was right because He remained perfectly aligned with His Father and focused on doing His will.

3. I am not necessarily right because my church (or ministry) is popular.

This is somewhat similar to the size issue. Every church and ministry like to have people excited and “buzzing” about what’s going on. Popularity, though, is not something we are to pursue through slick marketing, catchy slogans, and clever PR. It’s true that Jesus was popular and that, “His fame spread throughout all the region around Galilee” (Mark 1:28), but Jesus’ notoriety was based on the substance He ministered. Popularity was a by-product of the quality of what Jesus was actually ministering, not a goal to for the purpose of increasing His market share.

Honestly, I’m not against genuine advertising or even against good marketing, but we need to avoid hype and marketing with wrong motives, and we must avoid interpreting popularity (as fleeting as it can be) as some kind of stamp of divine approval. Some who thought their popularity was a sign of heavenly endorsement found out that, in fact, they were simply the “flavor of the month” among fickle Christian consumers. What I’m saying is that we need to focus on the steak, not the sizzle.

4. I am not necessarily right because my church (or ministry) is persecuted.

Over the years, I’ve seen various ministers get off on a weird doctrinal or methodological tangent, and they proclaimed that this new direction was based on a special revelation God had given them. When others did not concur with or celebrate their new course, they immediately began to play “the martyr card.” They began to use this so-called persecution as a validation that they were on the right track. I’ve heard different individuals say over the years, “Well, they persecuted the prophets, they persecuted Jesus and the apostles, and now they’re persecuting me.”

Part of the overall deception in some cases is a false belief that essentially says, “If you don’t agree with me and submit to my new revelation, then you are persecuting me.” Obviously, I am not in favor of anyone persecuting anyone else, but simple disagreement is not persecution. People are entitled to their own opinion and perspective, and if someone disagrees with me and I’m offended, maybe I just need to get a little thicker skin.

5. I am not necessarily right because my church (or ministry) is wealthy.

It is common for people to associate financial increase with the blessing and favor of God, and it can be. However, financial gain or accumulation is not absolutely synonymous with divine approval; some people have just learned how to play the game well (and some play dirty). The Bible is actually quite clear in teaching that material wealth alone does not automatically equate to divine favor. In Revelation 3:17, Jesus warned the church of Laodicea, “…you say, “I am rich, have become wealthy, and have need of nothing’—and do not know that you are wretched, miserable, poor, blind, and naked.” Proverbs 10:22 says, “The blessing of the LORD makes one rich, and He adds no sorrow with it.” There are ways of obtaining wealth (crime, manipulation, etc.) that have a distinct downside to it, and those we are to avoid. As much as we all appreciate abundance and prosperity, we must avoid coming to the conclusion that the presence of wealth is an absolute indicator of divine favor.

6. I am not necessarily right because my church (or ministry) is poor.

At the other end of the spectrum are people who think that poverty is a sure-fire indicator of God’s favor. They ascetically delight in their lack and deprivation, believing it is a sign of piety. While some have commendably chosen to have less instead of compromising (Hebrews 11:26), others may be lacking for less noble reasons. Wearing a “poverty mentality” as some kind of badge of misguided honor (in reality, it can be spiritual pride) is simply not in the Kingdom’s best interest as it often takes substantial finances and resources to carry out God’s work in the earth. I deeply appreciate all who have genuinely sacrificed for the Kingdom and for the benefit of others, but a believer or minister being dirt poor is not an absolute guarantee of spiritual superiority.

Like crowds and popularity, income can vary. Paul said, “I know how to live on almost nothing or with everything. I have learned the secret of living in every situation, whether it is with a full stomach or empty, with plenty or little” (Philippians 4:12). Just like Jesus wasn’t more right when crowds were growing than when crowds were shrinking, Paul wasn’t more right when finances were good than he was when finances were tight.

I really shouldn’t declare myself “right” based on the size of my following, large or small. I can’t assume I’m right based on popularity or persecution. And I can’t determine how right I am based on an abundance of money or the lack thereof. Perhaps one of the best things we can do is follow Paul’s admonition to a group of believers who were actively engaged in politicking for who their favorite preacher was. He said in 1 Corinthians 4:5, “…judge nothing before the time, until the Lord comes, who will both bring to light the hidden things of darkness and reveal the counsels of the hearts. Then each one’s praise will come from God.”

Should we strive for accuracy? Absolutely. 2 Timothy 2:15 says, “Study and be eager and do your utmost to present yourself to God approved (tested by trial), a workman who has no cause to be ashamed, correctly analyzing and accurately dividing [rightly handling and skillfully teaching] the Word of Truth.” There are some workers who are approved, and others who are not. We should endeavor to be accurate so that we can properly represent and portray God to those who need to know Him, not so that we can arrogantly boast that we are right and everyone else wrong.

For just $100 per month you can bring the gospel to 10,000 homes. Join us as media missionaries! GIVE NOW
VIEW COMMENTS
« What I’ve Learned So Far in My Marriage That Can Change Yours Here’s How to Really Pray for the Lost Ones in Your Life »