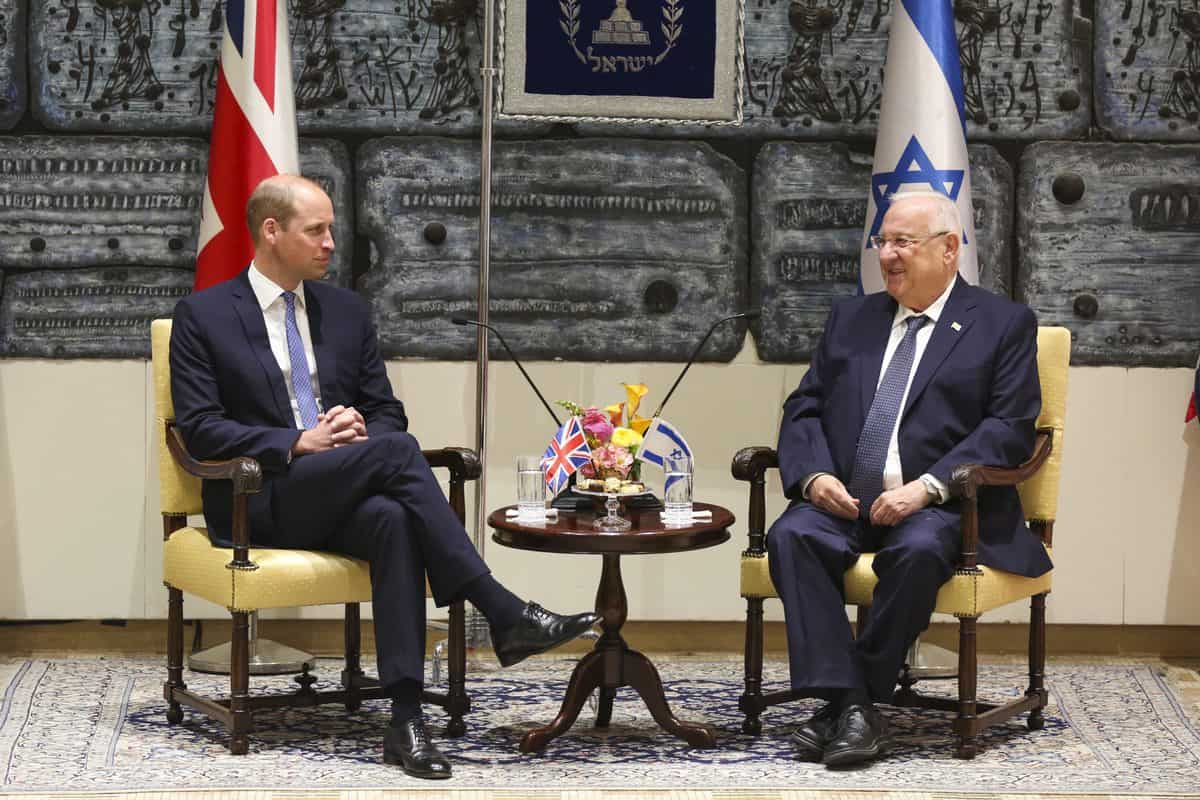 Prince William, the Duke of Cambridge, met with President Reuven Rivlin and Prime Minister Binyamin Netanyahu Monday, following a visit to the Yad Vashem national Holocaust memorial earlier on the first day of his royal visit to Israel.

President Rivlin told the Prince to “send a message of peace” to Palestinian Authority Chairman Mahmoud Abbas, whom he is set to meet in Ramallah on Wednesday.

Prince William, making the first-ever official visit to Israel by a member of the British royal family,  avoided political statements, saying that he looked forward to but rather said he looks forward to “absorbing and understanding the different issues, the different cultures, the different religions, culminating in a visit, which will be very symbolic and very interesting for me, in the Old City on Thursday which I am very much looking forward to seeing.”

Rivlin, who was born in Jerusalem in 1939 under the British Mandate, told the Prince that he was born as a British subject and walked to school everyday on a street named after a British king.

“Your Royal Highness, I was born as a British subject, Rivlin said. “I walked to school every day down King George Street, but also past King David Street. We were here 100 years even before the Balfour Declaration, a declaration which helped the People of Israel, the Jewish people from all around the world bring to reality the idea and the belief that the Jewish people have to return to their homeland,” Rivlin said.

“This land knows about history and you’re writing a new page of [that] history,” he added.

Before his meeting with the President, Prince William held a short meeting with Prime Minister Benjamin Netanyahu and his wife Sara at the Prime Minister’s Residence in Jerusalem. During the meeting, the Prime Minister and his wife, together with the Prince, met with descendants of Haimaki and Rachel Cohen, who were saved during the Holocaust by Princess Alice, Prince William’s great-grandmother. Haimaki Cohen was a Jew and former member of the Greek parliament from Tricala in northern Greece.

Prime Minister Netanyahu and his wife gave the Duke of Cambridge a replica of a Righteous Among the Nations Certificate for Princess Alice, who was granted the title in 1993.

Earlier in the day, Prince William visited the Yad Vashem national Holocaust memorial, which he said had left him “profoundly moved.”

“I had a very moving tour around Yad Vashem this morning which really taught me quite a lot more than I thought I knew about the true horrors of what happened to the Jews during the war,” he said.