Rivlin: ‘Proud that Israel is Only Country in Middle East Where Christian Community is Not Shrinking’ | God TV
News 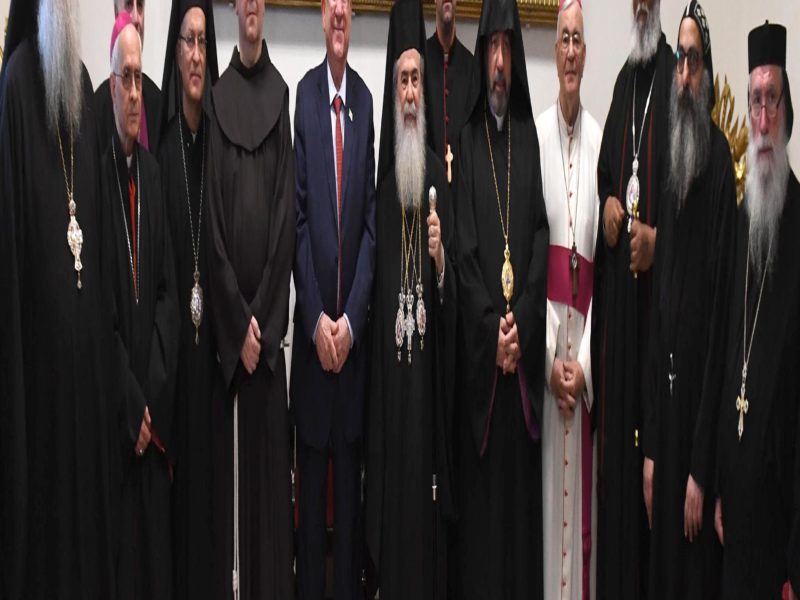 President Reuven Rivlin on Monday visited the Franciscan Church in the Old City of Jerusalem to mark the Ascension Day and 800 years of the Franciscan Order’s presence in the Holy Land. Rivlin was hosted by Custos of the Holy Land Father Francesco Patton, and the heads of the other Christian denominations in Israel were also present.

In his remarks, the president noted the importance he attaches to meeting with the Christian communities in the Holy Land.

He highlighted Israel’s commitment to the holy places of all religions, saying that “the State of Israel, as guardian of this city, is deeply committed to the religious rights of worship and activity of all communities of faith in Jerusalem and Israel.”

“Christians, Muslims and Jews will always be free to worship here. Israeli sovereignty will never compromise religious freedom,” he vowed.

He further related to the “difficult and painful times for Christians in the Middle East. I am proud that Israel is the only country in our region where the Christian community is not shrinking, but in fact is growing.”

The Christian population in other areas of the Middle East is in constant retreat.

For instance, before Hamas took over the Gaza strip in 2007, the Christian population there number over 3,000. Today, some 1,000 Christians remain.

The Muslim-Christian Council in Jerusalem recently published a survey that shows that the Christian population in the Palestinian Authority (PA) consists of only one percent of the general population. Tens of thousands of Christians have left the PA for other parts of the world following religious persecution they have encountered at home, including the confiscation of Christian land and the assault on young Christian women.

Once a sizable community, the survey’s numbers show that today the community numbers only 45,000 in the PA, with 4,000 living in Jerusalem.

Jifnah, one of six Christian villages in the Ramallah area under the control of the PA, is home to some 2,000 Christians, 400 of whom have immigrated to other countries.

For just $100 per month you can bring the gospel to 10,000 homes. Join us as media missionaries! GIVE NOW
VIEW COMMENTS
« Israel’s First Lady Nechama Rivlin Passes Away at 73 Michael Tait From Newsboys Visits The White House To Worship God »