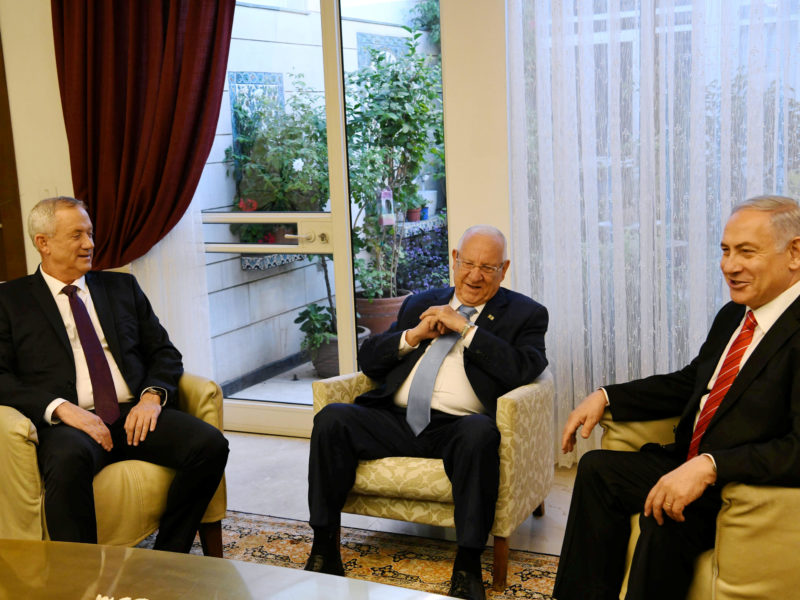 Rivlin made the announcement after dining with Netanyahu and his main political Rival, Blue and White leader Benny Gantz.

After noting that Netanyahu received the backing of 55 Members of Knesset (MK) to form a government, as opposed to 54 which Gantz received, and after noting that Gantz lost 10 of his backers from the Arab parties, Rivlin said he was tasking Netanyahu with forming the next government.

He said there was “no point in drawing out the process. If I fail to form the government in the coming days, I will return the mandate and move into the 21-day period when a unity government might be established.”

Gantz said that as far as he was concerned, a unity government “is not an election constraint, but a genuine desire arising from the need to unite the people, and to create a stable and capable government. A government that will work to correct deep problems in Israeli society.”

Teams from Netanyahu’s Likud and from Blue and White have already met a few times over the past few days and have commenced negotiations. The teams are slated to meet again on Thursday.

The issues of religion and state will probably be a significant sticking point, as Netanyahu’s bloc of 55 consists of many religious MKs, while Gantz’s camp seeks a more secular identity for the state.

Another issue that will require significant ironing out is who will first serve as prime minister, and what Netanyahu’s status will be if he is indicted in the corruption case he is facing.

It appears that Netanyahu will have the best chances of forming a broad unity government, as opposed to one based on his natural coalition partners from the right. He attempted to form a similar government after the April elections but failed.

Looking to the future, Netanyahu said that President Donald Trump’s Deal of the Century peace plan presents “a one chance opportunity for historic achievements.”

Trump is reportedly waiting for a government to form in Israel before he unveils the plan.

For just $100 per month you can bring the gospel to 10,000 homes. Join us as media missionaries! GIVE NOW
VIEW COMMENTS
« Netanyahu to Turkey’s Erdogan: ‘Stop Lying’ Former Megachurch Pastor Dave Gass Renounces His Christianity »