BREAKING
Lay Aside The Old Self
Ben And Jerry’s Staying In Israel, But Founders Aren’t Doing The “Chunky...
Israel Has a New Prime Minister
Home Breaking News Russian Soldier Breaks Down In Tears As Ukrainians Gave Him Food And Calls His Mother 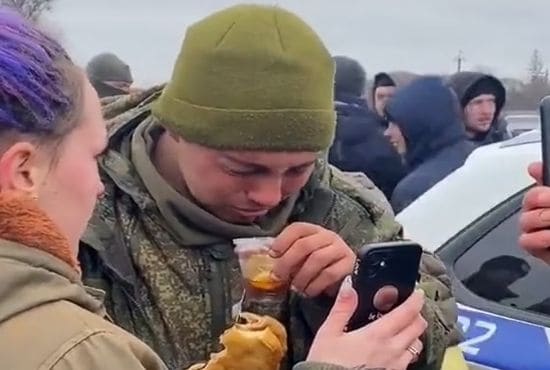 A Russian soldier broke down in tears as Ukrainians gave him tea and a pastry, and calls his mother after he surrendered.

According to a statement of Ukrainian President Volodymyr Zelensky, the morale of Russian forces is constantly deteriorating. He also added that his troops have killed around 9,000 soldiers of Vladimir Putin, thanks to the perseverance of the Ukrainians.

“Our military, our border guards, our territorial defense, even ordinary farmers capture the Russian military every day,” he said in the video. “All the captives say only one thing: they do not know why they are here. Despite the fact that there are dozens of times more than them, the morale of the enemy is constantly deteriorating.”

Reports say that many Russian soldiers have been surrendering their fight against Ukraine. On Wednesday, a video of a Russian soldier who just surrendered to the Ukrainians went viral on Social Media platforms.

In the video, it is seen that locals are feeding the man and keeping him warm with the tea that they gave him. One kind woman also offered her phone so that he could call his mother. Upon seeing his mother’s face through a video call after days of hardships in the war, he broke down in tears.

“Natasha, God be with you. We will call you later. He is alive and healthy,” one woman said to his mother.

The locals who are gathered around the young man gave him warm tea and a pasty. They welcomed the hungry soldier and treated him with love and compassion instead of blaming him for what their country has gone through.

“These young men, it’s not their fault. They don’t know why they are here. They are using old maps, they are lost,” one man’s voice was heard in the video.

Amidst the chaos and war, let us still show the love of Jesus to everyone we meet. Love has the power to change hearts and put a stop to this war.