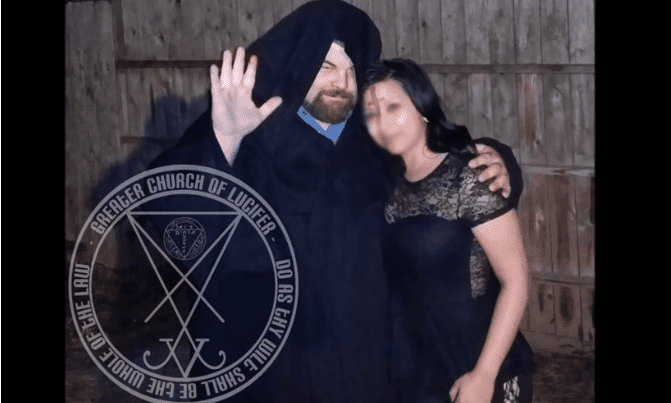 Satanist Renounces Dark Past, Accepts God’s Forgiveness, and is Baptized!

On February 5, 2017, avowed Satanist Jacob McKelvy renounced darkness and accepted God’s healing forgiveness less than two years after opening the Satanist Greater Church of Lucifer in Houston. Not only that, but as a certified minister, he baptized his own wife – his first Christian convert – who began to dabble in darkness long before the two were acquainted.

God’s work in Jacob’s life defies many Christians’ limited expectations of God. Jacob’s story goes to show that nobody is beyond God’s grace. God never abandons His people. Those hateful billboards that scream “GOD HATES SINNERS” could not be further from the truth. God hates sin – not the sinner.

Read on to discover the mind-blowing scope of God’s radical grace. And check out this video to see the tear-jerking conversion unfold.

Bitten By The Snake

If you are familiar with common portrayals of the devil, it may come as no surprise that Jacob’s spiritual rebellion came after a snakebite. Specifically, after his sister died of a poisonous snakebite, heartbroken Jacob did a 180 from the religion of his past – Mormonism – to full-fledged defiance against God.

“There was a lot of hopelessness and feeling of powerlessness that drew me to become a [satanist].” Jacob felt that God had abandoned him, and drew comfort from the satanic philosophy of being his own God – just as Satan wanted his own kingdom and became ruler over this broken, sinful world (John 12:31). Satan even tempted Jesus with the fleeting mirage of power, but Jesus stood firm against the devil (Matthew 4: 1-11).

It was also Satan who took on the form of a slithery snake and tempted Eve to eat the apple to gain perfect knowledge (and lose innocence). And it was again Satan who tempted Jacob to glorify himself.

Leader of the Rebellion

A king wants a kingdom, and ultimately Jacob yearned to lead his own devil-worshiping congregation. In October 2015, he founded the Greater Church of Lucifer in Houston – to the dismay and outrage of local religious groups – and for that matter, religious groups around the world.

In Houston, angry picketers lined the streets outside of McKelvy’s church, shouting intolerance and spewing hate against the satanist. Soon, picketers forgot the real target of their hate, and turned hate on each other, warring over interfaith differences.

In other parts of the U.S., the opening of the satanic church caused some to question why America still allows freedom of religion.

And in Nigeria, one preacher led a prayer asking God to release wild dogs to chew McKelvy’s flesh, rendering him unable to lead his church. The Nigerian congregation enthusiastically applauded.

But amidst all the hate, emerged a shining light in the form of Pastor Robert Hogan from Spring First Church – just down the road from the satanic church. The day after McKelvy’s church opened, Pastor Hogan kindly asked his parishioners to refrain from picketing: “If you want to picket it, picket it on your knees.”

From day one after the satanic church opened its doors, Pastor Hogan was convinced, via fervent prayer and listening for God’s word, that the Greater Church of Lucifer would be a hotbed for Christian revival. He did all he could to create a welcoming, loving environment at his church and waited patiently for God’s perfect timing.

Sure enough, it wasn’t too long before the desperate, empty McKelvy walked into Pastor Hogan’s church. After a four hour conversation with Hogan, McKelvy surrendered his life to Christ – an answer to prayers. According to McKelvy, “Robert’s probably one of the best men I’ve ever met in my life. He’s the real deal.”

On February 5, 2017, McKelvy and his wife renounced their satanic ties, renewed their wedding vows, and were baptised in front of a tearful congregation that had prayed for this day to come. Soon after, the doors of the Greater Church of Lucifer closed for good – not due to a rapid pack of dogs, but due to the prayers and love of devoted Christians.

As a testament to his newfound faith, Jacob spoke these powerful words as he renewed his wedding vows, “We were mired in the shadows of the adversarial influence and knew no love outside of each other. Today I REBUKE, DENOUNCE, AND BREAK the satanic covenant by the BLOOD OF JESUS.”

Pastor Hogan continues to meet with Jacob to ensure he is well-grounded in Scriptural truth – the basis for spiritual growth. Jacob hopes that his testimony will light the way for others who are far from, or even opposed to, God. Jacob insists, “No matter how far away from God you think you are, there is always a way home.”