School Shootings: What if Every Church Were to Pray for Their Closest School? 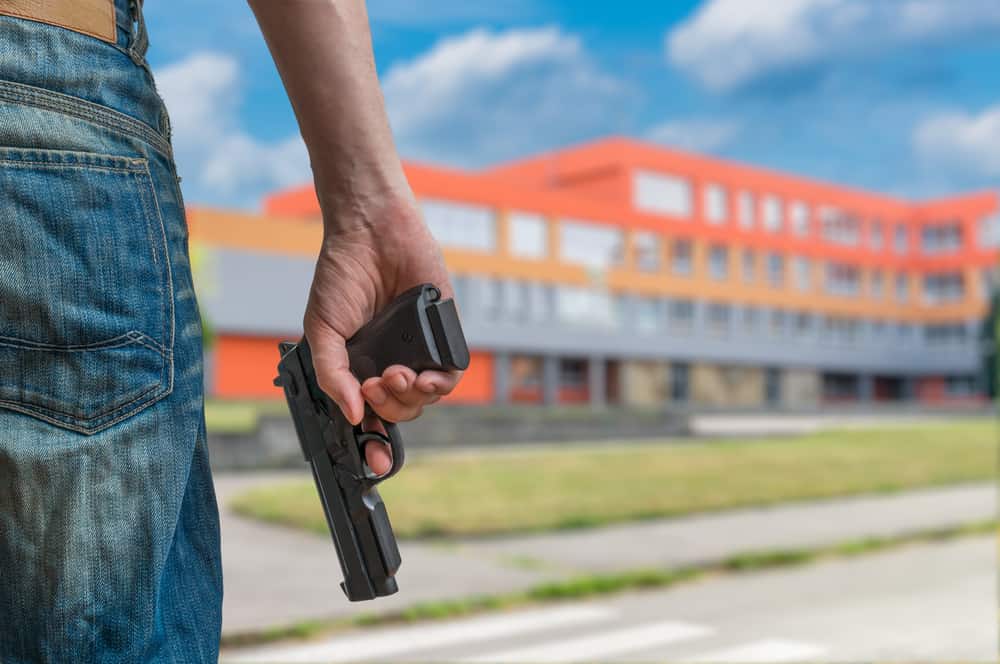 It was May 18, 2018, a Friday morning; I called my sister-in-law to check on my niece. Megan suffers with asthma and she had broken out in a bad rash.  Her arms, legs and neck were covered in red welts; a reaction to being exposed to grass cuttings while helping her Grandfather with work in the garden.

Megan answered the phone. “How are you doing?” I asked.

“Fine Aunty, my blotches have cleared from my face,” she said. We chatted about her schoolwork and I sensed that she didn’t want to hang up. I asked her if she wanted me to pray for her. She said yes.

I asked, “Shall we pray over the phone?”

That was an unusual request. She had never asked me to do that before. So I grabbed my bag and drove to her house. It took me ten minutes to get there. We didn’t have much time as she was getting ready for school. Her Mom and I held her and we prayed for her. I am not sure what we prayed. Then I left.

As I drove home, I drove past Megan’s school. As I passed her school I noticed a man walking on the opposite side of the school dressed in a long tan trench coat. I’d never seen anyone dressed like that on a very warm morning in Phoenix, Arizona.

His unusual appearance made me think of the school shootings plaguing our nation. I thought, he could be hiding weapons under his coat. And I prayed, “Lord, keep the students safe; deliver them from the evil one.”

As I drove past the trench coat man I noticed another unusual sight. There were two large muscular  men walking a short distance behind him. I wondered, “Are they protectors or destroyers?”

Then I thought, “We wrestle not against flesh and blood, but against the cosmic powers, against the spiritual forces of evil in the heavenly realm.” And I prayed, “Lord send your angels to protect Megan’s school.”

This entire scene played out within a few seconds as I drove by the school.

That afternoon I heard about the school shooting in Santa Fe, Texas. The news announced that ten had been killed. I wondered, “Should I have gone home and knelt down in prayer for all schools that morning?”

That evening my sister-in-law called and told me that Megan had had a severe asthma attack. She was recovering at home after having to call 911 out to tend to her. That had never happened before. She was doing okay, and was resting.

The next day I spoke to Megan. “I could have died Aunty,” she said. “I was swimming laps with the swim team and got out the pool in order to breathe in my inhaler, but it didn’t stop the asthma. I could have drowned,” she said.

Then Megan described her frightening ordeal. “Mom drove me home because my car was in the repair shop. I would not have made it home if I had driven myself,” she said.

“When I got home, I dressed and sat by the kitchen table. I couldn’t see, and I blanked out. Mom put my nebulizer on me and I started to breathe.

“I was okay by the time the emergency guys walked in the door. They checked me and gave me an emergency syringe. You must come see it.”

Then we knew why we needed prayer that morning. Wow!

Lord, deliver this school from the evil one

But what about the school attack in Texas, did I fail those students? Are we failing our schools by not praying for them?

My church has adopted the school closest to them; the church serves them by supplying paper and doing odd jobs. But mostly, the church prays for this local school.

I think it would be of great benefit if every church in America were to adopt the school closest to them and pray for them. That each church would pray the end of the Lord’s Prayer over their local school; “Lord, deliver this school from the evil one.”

This article was written by Teresa Onstott who is a published author from Phoenix, Arizona. Her books include children’s illustrated storybooks available from Amazon.

Teresa Onstott is a published author from Phoenix, Arizona. Her books include children's illustrated storybooks.