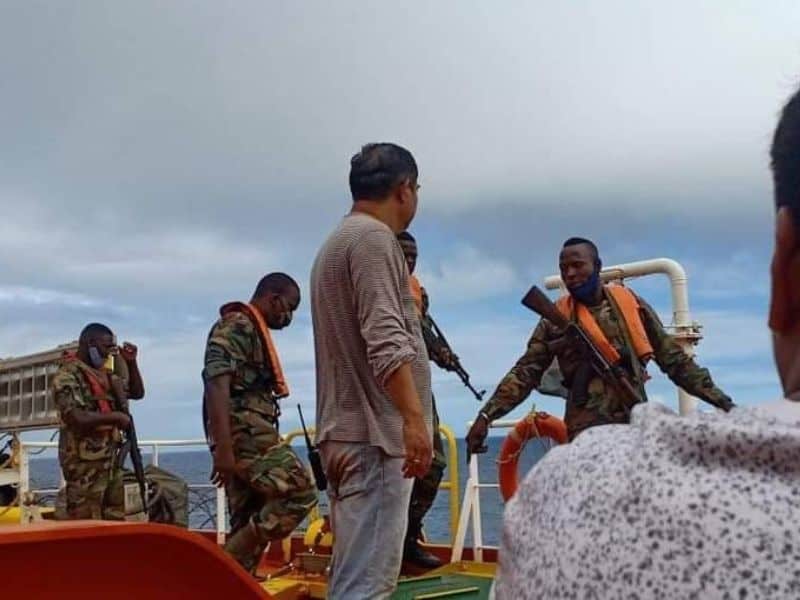 A post from a seafarer went viral as they share with the public the struggle and risk of becoming a sailor, especially from pirate attack. Pirates invaded their ship and put their lives in danger. But, several hours after, the Navy came to the scene, and pirates were subdued. They credit God for their safety.

According to Sir Mikho Jara, he and his crew were sailing along the shore of Lome, Togo, Africa on October 17. During his shift at the Engine Control Room, an unexpected call alarmed everyone on board. “First it was just an ordinary call stating that they need to increase engine RPM so I told my duty engineer about the situation,” he wrote. “All of a sudden a PA was announced by Captain, [a] Myanmar local, saying “all crew proceed to bridge for mustering”.

Crewmates go through mustering as a protocol for the safety drills. “I’m not quite sure of what’s happening but one thing is for sure something’s bad gonna happen,” he thought. Just seconds after, the voice announcement they all feared came. “PIRATES ONBOARD,” the Chief Engineer said.

Everyone immediately went down to the citadel. Their chief officer was able to call for help and sent a distress signal to their office. They take turns in guarding and looking out for each other for the next hours. Everyone felt tired and helpless as they wait for incoming help. They hoped that no pirate can enter their safe place.

The next morning, another call woke up the sailors. “Chief officer pick up the said call and after a while, they told us to gather around for news, and I’m praying it is a good one,” Jara continued.

Thankfully, the Togo Navy is already around the vicinity. The Navy instructed them to wait for their signal before coming out of the citadel. “After an hour, the go signal to come out happened,” the seafarer recalled. “We slowly go out and eyes are everywhere to make sure that no pirates are still onboard.”

When they saw that they are finally safe, everyone jumped for joy. “Everybody thanked God for keeping us safe. after a 13 hour battle, we can finally say we survive and we are free from this pirate attack. Now we are sailing towards our destination with the Togo Navy to ensure our safety and safety of the ship.”