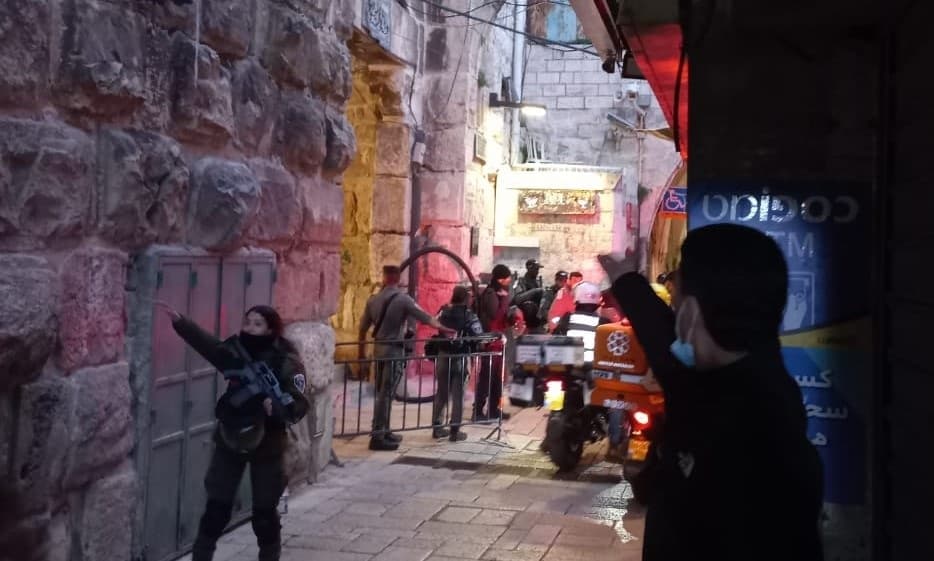 For the second time in the last two days, a terrorist stabbed Israeli border police offices at one of the gates that enter into the Old City of Jerusalem. The second attack occurred on Monday evening at the Cotton Gate, which leads into the Temple Mount area, reported the police spokesman’s office.

The terrorist was armed with a knife and stabbed two Jerusalem District and Border Police officers who were operating in the area.

In response, police opened fire on the terrorist in self-defense and he was killed. The attack left two policemen moderately injured (according to medical sources) and they were evacuated to the hospital

The Israel Police said that in response to the terrorist attack considerable police forces were called to the scene where they set to work gathering information and evidence.

The attack came after another Arab terrorist stabbed and injured two other Border Policemen at the Lions’ Gate entrance to the Old City of Jerusalem early Sunday morning. That terrorist, a 19-year-old from eastern Jerusalem, was shot and killed by the police who responded to his attack.

Hadassah Medical Center in Jerusalem reported that a 25-year-old policeman with stab wounds to the upper body was taken to the trauma room at Hadassah Mount Scopus. His condition was reported to be apparently moderate, and the victim of the attack was fully conscious when brought in. The policeman underwent imaging tests.

MDA medic Baruch Weissman referred to two wounded officers. “When we arrived at the cotton gate, we saw the policemen treating 2 wounded [police] in their 20s,” he said, “who had suffered stab wounds. We took them to the Western Wall plaza for initial medical treatment, which included applying bandages and stopping the bleeding, and transferred them to an intensive care unit that then evacuated them to the hospital when their condition was stable.”

Condemnation of the attack came swiftly from Israel’s right-wing politicians. An irate MK Itamar Ben-Gvir, who leads the opposition Otzma Yehudit (Jewish Power) party tweeted, “Terrorist attack follows terrorist attack, and for the second time this week another attack, and the government is silent.”

“At this difficult time,” added Ben-Gvir, “praise to the fighters who acted professionally, and eliminated the heinous terrorist along with all the people of Israel praying for the safety of the wounded.”

Matan Peleg, chairman of the “Im Tirzu” (If You Will it) Movement released a statement in response to the attack, saying that Israel’s government is too busy dealing with the crisis in Ukraine to deal with security issues at home. “With all due respect to the desire to mediate between Russia and Ukraine, the Cabinet must convene and prepare for the wave of terrorism that by all indications is going to resume on us soon,” he said.

Peleg also warned that every year just before the month of Ramadan acts of Arab terror increase in Israel.

“The lack of enforcement in the face of the construction of illegal mosques in Jerusalem joins the lack of significant activity in the face of growing terrorism in Judea and Samaria,” he added. “The policy of gifts and benefits to the Palestinian Authority, along with an attempt to maintain calm in the face of nationalist riots in Israeli territory, will certainly lead to another war within the cities.”