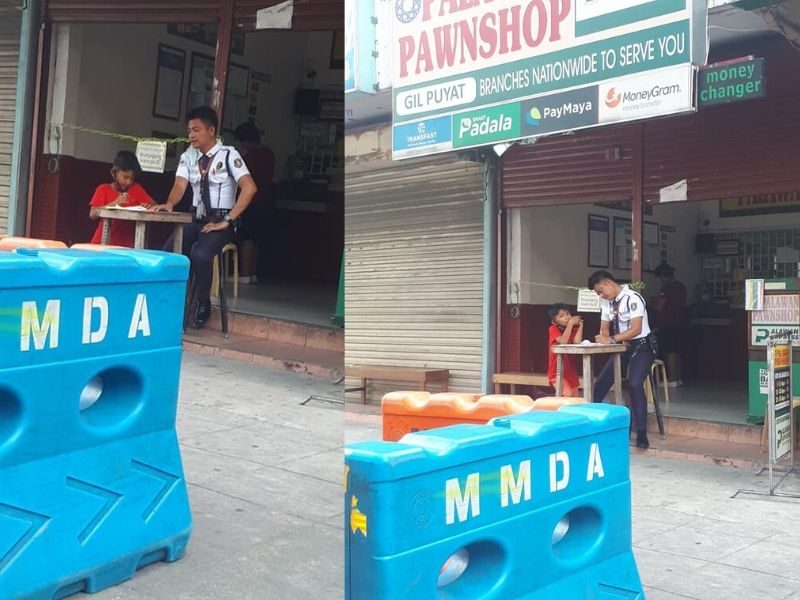 Pictures of a security guard has been circulating around the internet. His kind gesture of teaching a street kid how to read and write has inspired many.

Security Guard as a Teacher

A by-passer from Philippines noticed a security guard who was tutoring a street kid during his post. Apparently, he was assigned to guard a pawnshop. While there was still no clients, he took advantage of his vacant time to offer free lessons to a kid.

John Robert Flores captured the moment and posted it on his Facebook account. He revealed that he had seen the guard teaching several kids prior to that sweet moment. He was only able to capture the time when the officer taught one kid. Realizing the security’s big heart, he thought it deserved to be shared to the public.

“Even though he [security guard] is not related to the kid, he was willing to teach the kid out of his kind heart. I salute you, Sir! May the Lord continue to bless you for reaching out to the kids,” Flores said.

As the post went viral, some of the guard’s friends were able to identify him and tagged him in the comments. They felt proud as a friend and affirmed of John’s good will. Even customers who were regulars in the pawnshop commented and testified of his bright disposition. “He is really kind, respectful and always greets you with a smile,” one commenter said.

Other people remarked that parents should follow the example of the security guard. Because of the pandemic, parents are encouraged to home school their children to prevent spread of the virus. “If the security guard could teach the street kids, then there is no reason why parents can’t also do it,” Rachfeed reported.

For just $100 per month you can bring the gospel to 10,000 homes. Join us as media missionaries! GIVE NOW
VIEW COMMENTS
« Saying Grace Every Night And Prayers Every Morning Lecrae Pays Tribute To Ravi Zacharias By Closing Memorial Service With Rap Song ‘Tell The World’ »