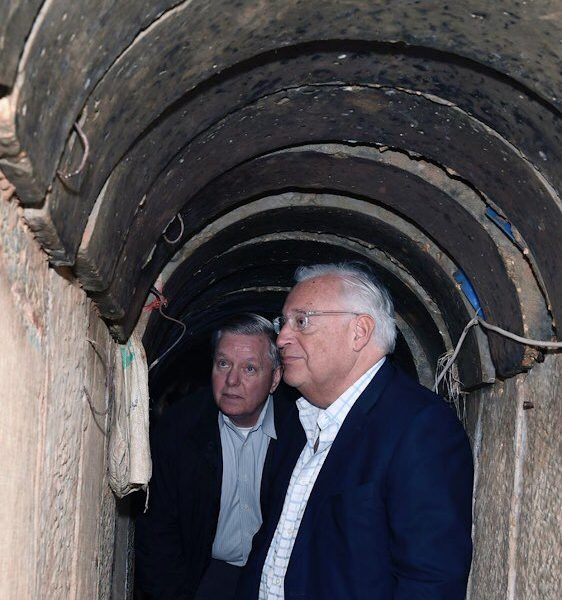 US Senator Lindsey Graham (R, SC) and US Ambassador to Israel David Friedman on Sunday toured the Israel-Gaza border area and entered a cross-border Hamas terror tunnel exposed by the IDF.

Graham and Friedman were briefed by IDF Southern Command Commander Maj.-Gen. Herzi Halevi and were accompanied by Brig.-Gen. Eliezer Toledano, commander of the IDF’s Gaza division, during their tour in the terror tunnel.

“Cost of tunnel = cost of 2 new schools = cost of 30 new homes. Hamas consistently makes the wrong choices for the people of Gaza. Heartbreaking,” Friedman tweeted after the tour.

“The tunnels have been used by groups like Hamas to smuggle weapons and terrorize Israeli citizens,” Graham added on Twitter.

Graham is slated to tour the Golan Heights with Prime Minister Benjamin Netanyahu on Monday.

Remarking on Graham’s visit to Israel, Netanyahu said during the weekly Cabinet meeting on Sunday that he will host “the important Senator, Lindsey Graham, a great friend of Israel, who up until recently chaired the Senate subcommittee on appropriations, a critical position in the American Senate, and now chairs the Judiciary Committee.”

“I will go up with him to the Golan Heights in continuation of our efforts to have the US, together with other countries, recognize Israeli sovereignty, and the Israeli possession, on the Golan Heights,” he added.

Senators Ted Cruz (R-Texas), Tom Cotton (R-Ark.) and Congressman Mike Gallagher (R-Wisc.) last month introduced companion bills establishing that it shall be the policy of the United States to recognize Israel’s sovereignty over the Golan Heights.

The bill states in part that “it is in the United States national security interest to ensure that Israel retains control of the Golan Heights [and that] the Syrian regime of Bashar al-Assad faces diplomatic and geopolitical consequences for its killing of civilians, the ethnic cleansing of Arab Sunnis, and the use of weapons of mass destruction.”

In January, Netanyahu met with US National Security Adviser John Bolton and raised the issue of the US’ recognition of Israeli sovereignty over the Golan Heights.

For just $10 per month you can bring the gospel to 1,000 homes. Join us as media missionaries! GIVE NOW
VIEW COMMENTS
« Terrorist Captured 2 Years After Carrying Out Attack in Efrat Katy Perry Leads Worship During Prime Time TV! »