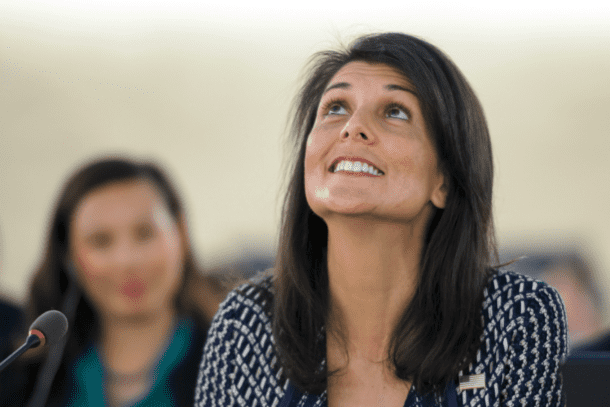 When President Trump said you’ve made the UN Ambassadorship, “a more glamorous position than it was two years ago,” that was an understatement. Nikki Haley, you have been the most vocal, influential, effective, bold, passionate UN Ambassador for the United States in history.

You led the effort to get the US out of the oxymoronic UN Human Rights Council, because they have “shown bias against Israel and a willingness to allow notorious human rights abusers as members.” You looked them squarely in the eye and called them out on their hypocrisy.

Under your leadership, the US is no longer leading from behind,as President Obama used to say. We are leading by example and are more concerned about being right, than about whom we might be offending. The world is a safer place because of you. ISIS has lost all of their territory. Iran is reeling economically because the US pulled out of the lopsided Iran Nuke Deal. We might even work out a deal with North Korea. You represented our position to the U.N. with eloquence and clarity. You are a rock star!

I have to admit: my heart skipped a beat last night as I checked the news while flying home to Israel from Katmandu, to find out that you were stepping down. You were my 2024 hopeful. You have been the most popular politician in the US during a time when very few politicians are respected or trusted. Even CNN said,

“American voters of different partisan stripes don’t agree on much nowadays, but they can agree on this: most of them approve of US Ambassador to the United Nations Nikki Haley.”

With a 63% approval rating, you top them all. Even among Democrats, you are just as popular as Chuck and Nancy, with a 55% approving tour job. Again, these democrats that you have won over!

Under your leadership, in regards to the nation of Israel:

You have credit in your heavenly account. Genesis 12:3 say that God would bless the one who blesses Abraham (and His descendants). Blessing is surely coming your way, as God will always keep His word!

You spoke truth to power!

“When I heard country after country in the United Nations Security Council critically standing in judgment of Israel, I spoke out. What I said shocked the people at the UN, but I’ll say it again because it’s the truth. Israel has acted with more restraint than just about any country would under those same conditions.” —Nikki Haley

John Hagee’s powerful organization, Citizens United for Israel, recently gave you the Defender of Israel Award for “the one person in America that we feel has done the most to defend and protect Israel.”

Never has a UN Ambassador shocked the world by his/her departure. If Samantha Power or Susan Rice before her resigned, the world would have hardly noticed. But everyone knows your name. Accolades and good wishes pour in from around the world. “Thank you for your support, which led to a change in Israel’s status in the UN,” said Danny Danon, your Israel counterpart. Israeli Prime Minister Netanyahu tweeted:

Nikki, you will be missed at the UN, but I pray your voice will still be heard and, hopefully, you will come back to serve the US and continue to be a friend of Israel. God bless you, Ambassador Nikki Haley!

This article was written by Ron Cantor, GOD TV Regional Director for Israel and host of Out of Zion. Find more from Ron Cantor at messiahsmandate.org.

For just $100 per month you can bring the gospel to 10,000 homes. Join us as media missionaries! GIVE NOW
VIEW COMMENTS
« Israel’s UN Envoy Accuses B’Tselem Head Of ‘Collaborating With The Enemy’ 10 Ways To Become A Kingdom Seeker »