Simchat Torah: The Celebration Of The Making Of Man | God TV
Articles 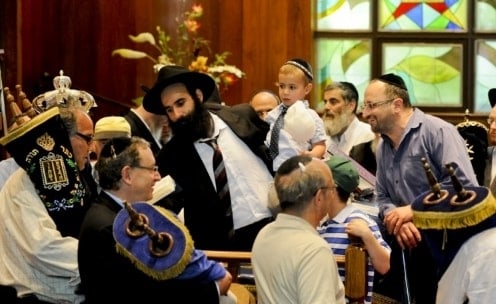 This week in synagogues all over the world, the Torah scrolls have been rolled back from Deuteronomy to Genesis as the reading cycle begins again. This takes place during the celebration known as Simchat Torah (The Joy of Torah). Simchat Torah has become a part of the celebration of the Biblical celebration of Sukkot (Tabernacles). However, when we read in Leviticus 23 concerning Sukkot, we find we are commanded to observe Sukkot for seven days, followed by a celebration of the eighth day. So, when we read about Sukkot, we do not see the celebration of Simchat Torah. Then, why do we celebrate it? I believe the answer to that question is prophetic and can be found when we dig a little deeper into the Scriptures. Before we do, let me take a moment to remind you that every one of the Appointed Times in Leviticus 23 has a prophetic fulfillment in the narrative of G-D’s redemptive plan. For instance,  Yeshua’s death takes place on Passover. His resurrection happened on First Fruits. The outpouring of the Holy Spirit in Acts 2 takes place on Shavuot or Pentecost. Many believe Yeshua’s return will happen on Yom Teruah/Rosh HaShana (Trumpets) and that the Judgement Day will be on Yom Kippur the Day of Atonement. That brings us to Sukkot, or Tabernacles. If each of the other Appointed Times have a direct correlating prophetic fulfillment in the Redemptive plan, then Sukkot must also.

Could it be that Sukkot represents the Thousand Years described in Revelation 20:1-5? But, if Sukkot represents the Thousand Years as we see in Revelation 20, why does Sukkot last only seven days, or eight if we include the commanded eighth day? Wouldn’t it need to have 10 days to fit in the figurative prophetic picture? What if I told you that Sukkot actually does have 10 days associated with it? To understand this, we first need to understand that every one of the Biblical appointed times has one extra day associated with it. This day is known as preparation day. Every week before Shabbat, there is a day of preparation. Before Passover, all of the leaven must be removed before the Feast of Unleavened Bread begins on the Day of Preparation. This is the same for each of the Appointed Times. So, when we include the Day of Preparation we now have nine days associated with Sukkot. But, what about the tenth day? What if Simchat Torah, while not commanded in Leviticus 23, was a part of G-D’s plan and instituted to complete the prophetic picture of Sukkot?

26 Then God said, “Let Us make man in Our image, after Our likeness! Let them rule over the fish of the sea, over the flying creatures of the sky, over the livestock, over the whole earth, and over every crawling creature that crawls on the land.” 27 God created humankind in His image, in the image of God He created him, male and female He created them.

Let’s dig a little deeper. We read in Genesis 1 that man was created on the sixth day and that G-D instituted the Sabbath on the seventh day. So, man was created on the Day of Preparation, but man was not made on the sixth day. The making of man is still taking place. Man is being made by “us.” G-D gave Torah and all of the Appointed Times in order to complete the making of man. He created man on the Day of Preparation, but mankind will be made on the eighth day, the day of new beginnings (which is the ninth day when we include the preparation day), and we will rejoice in the fullness of Torah, the completion of the work of Yeshua as man becomes not just created, but made on the Tenth Day, the celebration which completes the prophetic picture of Sukkot and its witness of the Thousand Year millennial reign. It was added by design by man as a celebration because this day of rejoicing in the Torah is about the prophetic time when man will no longer just be created, but on that day they will have been made.

For just $100 per month you can bring the gospel to 10,000 homes. Join us as media missionaries! GIVE NOW
VIEW COMMENTS
« God’s Word For You Today: Love One Another! Police Arrests Arab For Desecration Of Jewish Graves On Mount Of Olives »