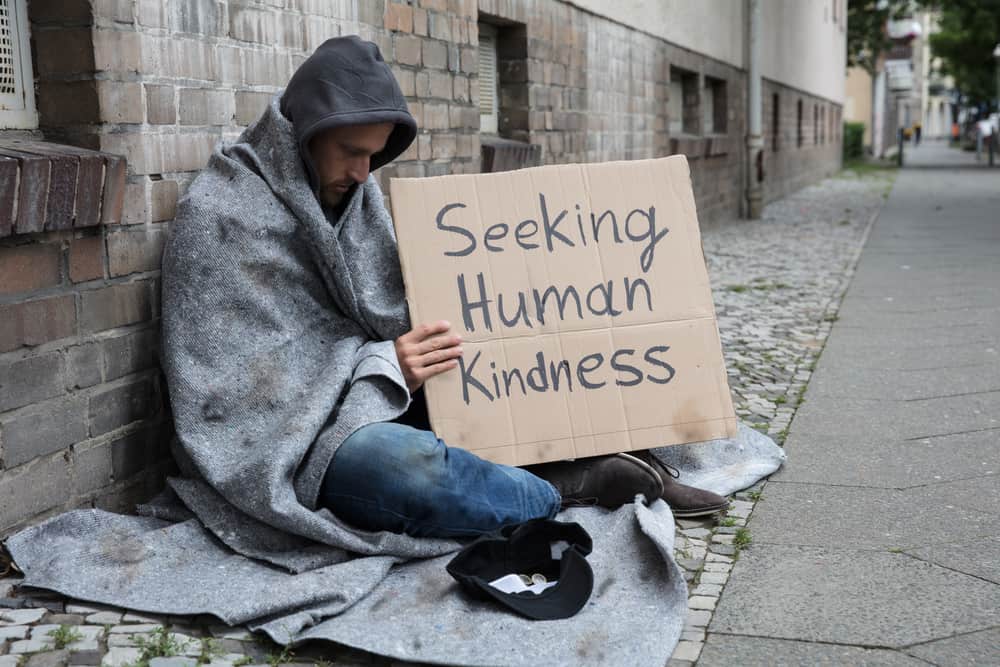 I watched a documentary about Skid Row, in LA – and I cried through the whole film. Sobbed. Some of the statements from people struck me like arrows through the heart. For example:

“I am addicted to the downtown life, where no one judges no one.” (A transgender)

“I take care of her because she is a human and she deserves that.” (A man who follows around a little hunchbacked elderly woman, feeding the cats from a garbage-filled grocery cart)

“I just live to love on other people, even though I am in constant pain.” (A woman with tumors on every inch of her body)

“I woke up one day and asked myself how did I get here? And that day I decided to take responsibility for my life.” (A man who used to be an Olympic champion, who fell into drugs)

“These people are my family.” (A young woman who lives on the street)

The stories go on and on – 50 blocks worth of stories. 50 blocks on Skid Row. A place of danger, and yet a place where people will share their only sandwich with you.

I visited Skid Row a few times when I lived in California and I will never, ever get over the feeling of being heartbroken for the people wandering the streets (those who are mentally ill, veterans of war, broken sons and daughters), the lost young person who can’t or won’t go home – every person who lives in those 50 blocks has a story.

It is not our job to judge whether any of these people deserve to be there – does anyone deserve to be broken? They are part of our family; the family of humanity. Most of them don’t know any other life than the streets, and would not leave if they could. It’s a sad reality. The street is their home. The sidewalk is their bed. The other homeless people are their family. This is Skid Row in LA; one block over from wealth! There are just a few tall buildings separating the poor from the rich.

Ironically, a broken heart looks the same whether it resides in a rich person or a poor person. ANYONE can become broken.  I don’t have any way to help them all. I don’t have a great elaborate plan to save them or to rescue them. Some don’t even want to be saved or rescued. Some absolutely DO. All I know is Jesus DID say to go into the highways and the byways. He just said to GO. I guess He hoped we would figure out what to do when we got there. 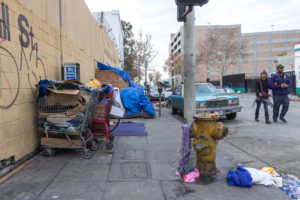 What CAN one person do?

Reach out to someone. There are millions of people around – so you do the math. One million people each helping ONE person, means a million people would: get a cup of coffee, get a fresh clean blanket or sleeping bag, get a bag full of useful items such as soap/toothbrush/nail file etc.), get a wrapped Christmas gift, get a warm meal, get a case of water, and on and on and on. Donate to their Mission down there by dropping off some bags of chicken, or bake a few dozen cookies (or have your whole church bake cookies). The possibilities, ideas, and creativity are endless.

EVERY HUMAN BEING IS VALUABLE.

Get involved with the homeless of YOUR city. Find a church group that has an outreach or start your own. Serve chili and rolls from the back of your car. Drag a Christmas tree and set it up by someone sleeping on a curb. Cover a few people in new sleeping bags. We can’t change the whole world in the blink of an eye, but we CAN change one life at a time. I say, let’s aim for a cool million! A million to reach a million. Why not?  #TheHolidaysAreComing #YoureTheOnlyJesusTheyMayEverSee