Stephen Hawking – How Should We Respond to the Death of the Well-Known Atheist? 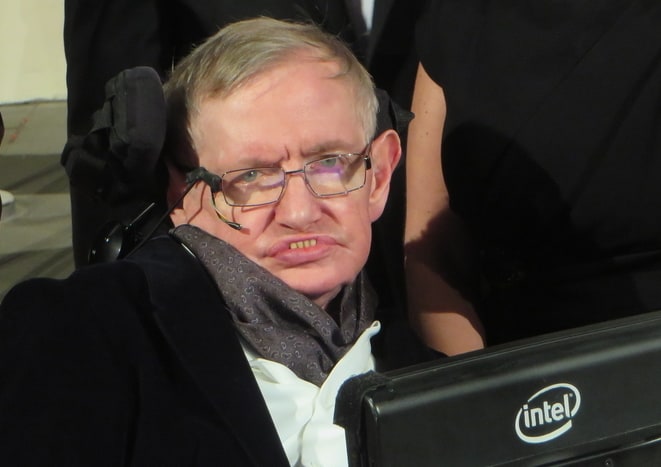 Stephen Hawking (1942 – 2018) was an internationally-renowned physicist, best-selling author, the subject of two major motion pictures and something of a medical phenomenon. It’s not surprising therefore that his death has made global headlines. He received many accolades in life and gave many disabled people hope as they saw how he bravely faced motor neurone disease.

Professor Hawking’s death, coming soon after the passing of the world-renowned  evangelist, Billy Graham, makes me wonder how the faith community should respond to the death of a well-known atheist. Though we don’t agree with Prof Hawking’s science or beliefs we can still pay tribute to him. Of course his earthly achievements cannot compare with the eternal fruit of the ministry of Rev Graham, but some immediate parallels between the two men  spring to mind.

One is great for sharing his belief in God and the other is known for sharing his disbelief. Upon his death, one was surrounded by friends and family and a global community of believers assured of his eternal future. The other, leaving a large following behind who have no belief in the afterlife and have to come to terms with life’s brevity and the stark finality of a life that is over.

Despite having been given only two years to live, Prof Hawking courageously held on to his life and continued to speak to a global audience through his famous voice synthesiser. You could say he was a brilliant mind imprisoned in a failing body and though we may not agree with his science and certainly oppose his atheism, we can still admire his immense bravery and resilience.

The film, The Theory of Everything tells part of Prof Hawking’s life story, how he was a professor at Cambridge and had to come to terms with one of the worst possible diagnoses anyone could bear to receive. You can imagine the day he was told as a young man that he would gradually lose the ability to move his body, entirely, leaving him unable to do anything for himself.

The film records the love story of Prof Hawking and his first wife, Jane as well as the tragedy of his failing health. It records how he had to learn to use a spelling board to communicate until he received a computer with his now famous built-in voice synthesiser. This is what he used to write his book, A Brief History of Time.

The Theory of Everything is a heart-rending story and I am not surprised that British actor, Eddie Redmayne won an Oscar for best actor for his portrayal of Prof Hawking, as well as a Golden Globe and Bafta. I am amazed that despite being given two years to live, Prof Hawking managed to live another 50 and was able to hang on despite huge obstacles until the age of 76. Lesser men would have given up long before and he didn’t.

Perhaps he was hanging on because he did not believe in life after death and he knew that was all he had been given. Unfortunately, life can be very hard for some people and Prof Hawking seems to have had it much harder than most. Yet he never gave up. For this reason, I admire him. If only more Christians, including myself, could be as tenacious as he was.

Prof Hawking is known for many quotable quotes. Writing about his death The Independent says that “he dismissed the comforts of belief in the afterlife, and said that he expected nothing to greet him after he died. ‘I regard the brain as a computer which will stop working when its components fail,’ he said. ‘There is no heaven or afterlife for broken down computers; that is a fairy story for people afraid of the dark’.”

As believers, we know this is not the case. What we believe in is not fiction, but a very real, down-to-earth relationship with God, whereby we can be assured of our eternal future. Another of Prof Hawking’s quotes provides some hope he may have found this out for himself before it was too late. “God may exist, but science can explain the universe without the need for a creator,” he said in a CNN interview. “The scientific account is complete. Theology is unnecessary.”

I hang on to those three words. Prof Hawking’s first-wife Jane is a Christian and she must have prayed for him, for years. He did at least acknowledge that God may exist. My hope is that he discovered that God does indeed exist, even if it was in his dying moments and that he surrendered his life to Jesus. He wouldn’t have even needed his voice synthesiser to articulate the words,  ‘Save me Jesus’.  They could just have come from his heart. I am convinced that in keeping with Scripture, anybody who calls upon the name of the Lord shall be saved. (Romans 10:13). That is what happened to the thief on the Cross. And Jesus told him, “Today, you will be with me in Paradise.” (Luke 23:43)

How Should We Respond to Prof Hawking’s Death

The obvious answer is with compassion for his family, including Jane who is a believer.  We should also show our respect for his courage. It is also a time to affirm our own beliefs in God. Several Christian leaders have been quick to do this in the media.

British Christian leader, Krish Kandiah who is often seen on GOD TV said: “Sad to hear about the death of #StephenHawking he was living proof that greatness comes in all shapes and sizes and that disability is no barrier to genius.”

Justin Brierley, who hosts a radio series that puts Christians up against atheists each week for robust debate, made an appropriate tweet shortly after the announcement of Prof Hawking’s death which provides an appropriately-worded conclusion for this post:

“Whatever he eventually made of the God question, there’s no doubt that we’ve lost one of the most brilliant minds who helped us to make sense of the world we live in #RIPStephenHawking.”

Justin is the Theology and Apologetics Editor for Premier and presenter of the Unbelievable radio series. He has written a book entitled, Why After 10 Years of Talking with Atheists, I am still a Christian.  If you would like to learn how to interact better and debate with your atheist friends, I highly recommend Justin’s podcast.