A couple who were criminals met a Christian in a gas station who would soon lead them to Jesus and that would forever change their lives.

Jodie and Billy Ballenger both lived a life digging themselves into the pit. Jodie was a burglar while her husband, Billy, was a drug addict. Their lifestyle eventually led to a SWAT team raiding their home, and they lost custody of their 9-month-old daughter. They tried to get their daughter back, but they weren’t allowed until they got to trial after getting out of jail. 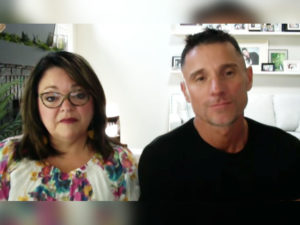 Until one day, Billy, who didn’t have a job, went to where Jodie was working—at a gas station. He wanted her to quit her job. He was rude and impatient, and Jodie even yelled at someone. Then some guy, a stranger, suddenly talked and offered him a job and hired him. And for the next 15 minutes, the man boldly invited them to church. Billy felt like he couldn’t say no because the guy had just given him a job. Then the man requested if his family could visit them in their house.

That night, the man’s family showed up at Jodie and Billy’s house. There, the Christian couple shared the Gospel with them. Then they began going to church. However, both always felt uncomfortable every time they went to church. But according to them, “we just felt like needles were sticking in our body all over.” The couple thought of never coming back. But for some reason, they kept coming back to the church. After three weeks, Billy was already playing the tambourine at church.

Six weeks later, Jodie and Billy went to prison charged as criminals as a result of their tough living. But the Christian couple stayed with them despite it all.

Soon, Jodie and Billy would have led a prison ministry and built an organization leading people to Christ.

How awesome is God who can turn every situation around! Nothing is impossible with Him!