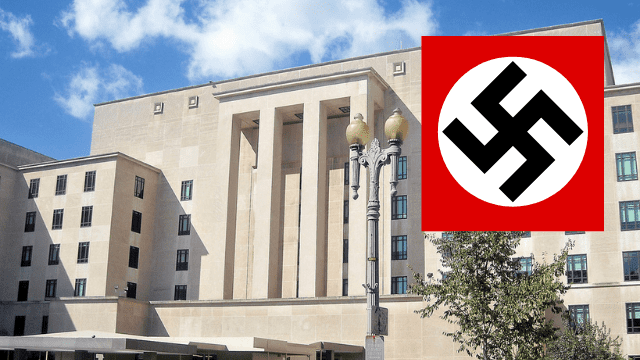 A swastika was discovered carved into an elevator at the US State Department on Monday. The notorious Nazi symbol, which is synonymous with a hatred of Jews, was found near the special envoy’s office to combat antisemitism.

Secretary of State Antony Blinken, who is Jewish and whose stepfather survived the Holocaust, strongly denounced the act of vandalism.

“As this painfully reminds us, antisemitism isn’t a relic of the past. It’s still a force in the world, including close to home. And it’s abhorrent. It has no place in the United States, at the State Department, or anywhere else. And we must be relentless in standing up and rejecting it.”

Since not just anyone can waltz into the State Department and hop on an elevator, one has to be concerned about the individual who did this. Do they work there? There is no question that in addition to the rise of white supremacism on the far-right, there has been tremendous hate coming from the far-left against Israel. Several US congresswomen greatly opposed Israel’s response against Hamas’ terrorist rockets in May. Popular television host and fake newsman John Oliver ripped into Israel in the middle of the war, drawing a sharp response from comedians in Israel, most of whom are on the left. When such high-ranking individuals in society make such irresponsible and ill-informed comments, the result is more hatred and violence.

The Anti-Defamation League—the leading organization that tracks antisemitic attacks in the US—recorded 2024 incidents of assaults, harassment, or vandalism against Jews in 2020, the third-highest level since they started documenting activity in 1979.

Secretary Blinken said the swastika has been removed. The vandalism will be investigated by Diplomatic Security, the federal law enforcement arm of the State Department.

For just $100 per month you can bring the gospel to 10,000 homes. Join us as media missionaries! GIVE NOW
VIEW COMMENTS
« Find Fulfillment By Subscribing To the Right Voices How To Prepare For The Suddenlies Of God »