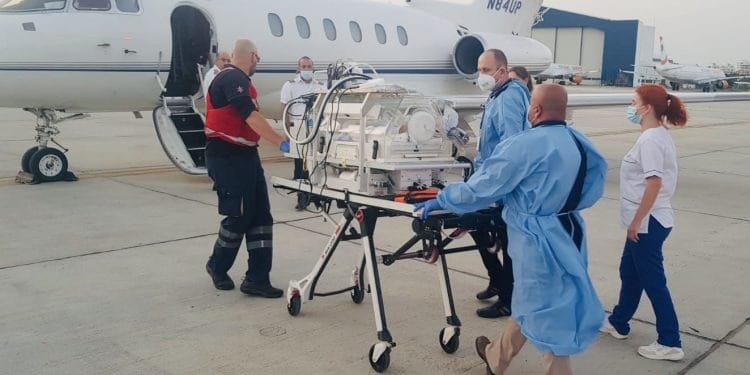 Israeli doctors performed a life-saving surgery on a 10-day-old baby from Syria who was flown to Israel last week for the emergency procedure.

The baby arrived with his father who is a refugee living in Cyprus. The doctors addressed the infant’s rare congenital defect — hypoplastic left heart syndrome — which is fatal if not repaired. This condition results in the left side of the heart failing to develop properly.

This is the first of this baby’s three surgeries that will be needed, according to Israel doctors who are observing his recovery at Sheba’s children’s hospital. The second will take place in six months and the third when the baby turns two. The family will return to Israel for the follow-up surgeries.

“The first procedure is always the most difficult. We have experience in doing the Norwood procedure on a number of children who come from throughout the region,” said Dr. Alain Serraf, head of the International Congenital Heart Center at Sheba. “If everything goes according to plan, the child can have a normal lifestyle.”

“I feel much more relieved and have complete faith in Sheba’s medical staff for all of the help they are giving my child,” he said.

Surgeries such as this are not new. Israel has a system for receiving children from developing nations — even countries that have no official ties with Israel — who need life-saving heart surgery. For many years, there was a field hospital set up in northern Israel just for the purpose of treating Syrians wounded in their civil war.

For just $100 per month you can bring the gospel to 10,000 homes. Join us as media missionaries! GIVE NOW
VIEW COMMENTS
« Francis Chan Did Not Believe In Miracles Until It Happened To Him Recently Infertility: Finding Hope In The Journey »