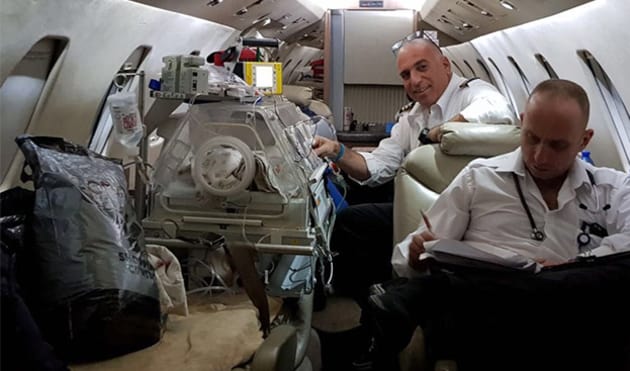 The Syrian child who was flown to Israel with his father  for heart surgery a few days after he was born in December  2017 will arrive in Israel on Tuesday evening for an additional operation at the Sheba Medical Center where he will remain for several weeks.

The infant will once again be accompanied only by his father, while the mother remains in Cyprus to take care of the rest of the family.

The  baby was born with a severe heart defect in  Cyprus, where the child’s parents, Syrian refugees,  resettled after they fled the country’s civil war. The Cypriot Health Ministry approached the Israeli Ambassador in Cyprus asking to fly the boy to Israel and is covering the costs of his medical care.

The boy will now undergo heart bypass surgery and will then need to return to Israel for a third time for further surgery.

“ It was a complex process to get all the permission to fly Syrian refugees to Israel, “ Yosef  Wurmbrand, consul at Israeli embassy in Cyprus, told TPS in a phone call that “the Interior Minister and Israel Security Agency (Shin Bet)  issued a special permit” for the boy and his father to enter the country.

Wurmbrand said the family are are very grateful to Israel for the medical treatment their son is receiving.

For just $100 per month you can bring the gospel to 10,000 homes. Join us as media missionaries! GIVE NOW
VIEW COMMENTS
« JNF Report: Half of Gaza Belt Forests Destroyed By Aerial Arson Attacks “B” is for believe »