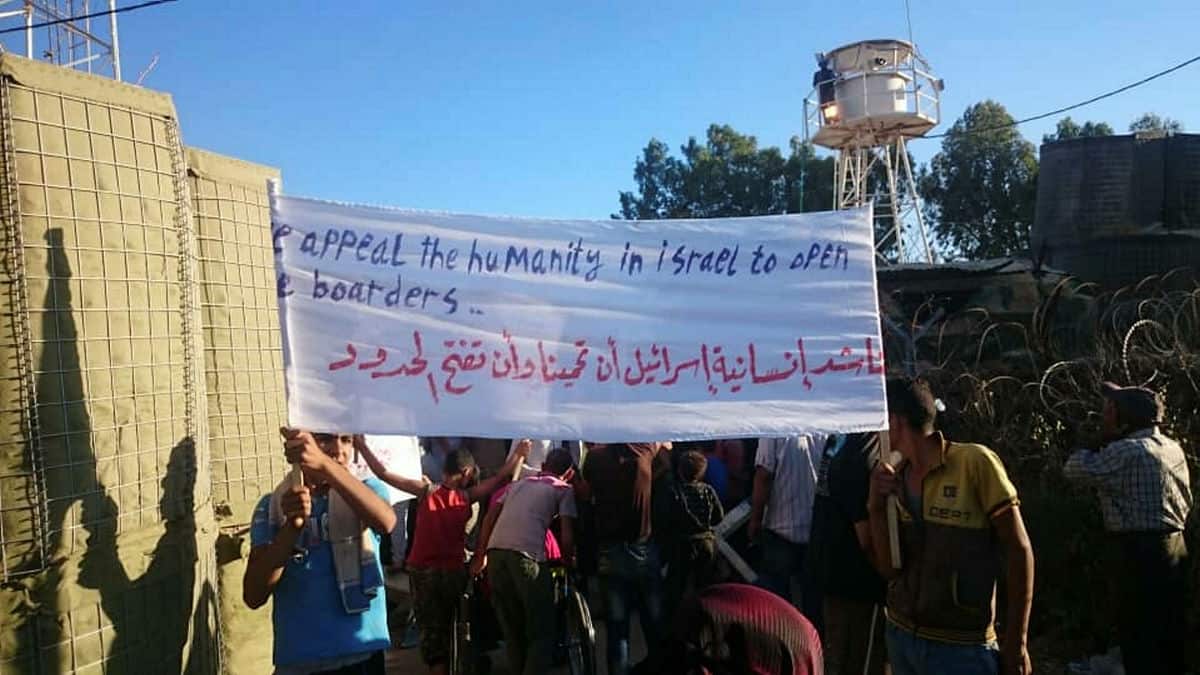 Municipal authorities loyal to Syrian President Bashar al-Assad have raised the Syrian state flag over the place where the ‘Arab Spring protests’ began in Syria in March 2011 igniting the country into seven years of civil war.

However, video footage shows hundreds of Sryrian locals denouncing Assad and Russian President Vladimir Putin in recent days and gathering at the Syria-Israel border to ask for IDF protection against possible reprisals by the victorious forces.

One local resident, speaking by phone from inside Syria, stressed that Western air strikes, rather than Assad’s forces, had forced the surrender of rebel forces, and also said that the reintroduction of Assad’s army would be a “disaster” for local residents. He added that a majority of Syrians, at least in the vicinity of the Israeli border, trust Israel and the IDF far more than the Syrian army and have called on Israel to move to protect them.

“Yesterday the Dara’a and Quneitra local councils in Golan Heights make a stand calling Israel to open their borders or to came (into Syria) to protect the Syrian people,” said the source, who spoke on condition of anonymity because he feared retribution by forces loyal to Assad.

“Every day (people are standing) at the Israeli border, every day, calling on Israel to protect them or to allow international forces to (protect them)… we wish (the Israelis) to came here and protect these people, either under the United Nations flag or the Israeli flag. I don’t know how, but the politicians have to solve this problem.”

The call for Israeli or international protection comes on the heels of a military offensive in recent weeks by Syrian army troops, together with Russian, Iranian and Hezbollah allies, to drive anti-government forces out of the region. Thousands of locals have fled, joining more than a million Syrians who have become displaced during the war, and local and international reports indicate that the regime is close to declaring victory in the south.

But the source contradicted reports that Russian forces are negotiating with rebel forces to turn in their weapons in exchange for guaranteed safe passage out of Dara’a after the surrender. He rejected a Reuters report outright that “fighters hoped the Russians would keep their pledge to maintain a permanent Russian military police presence inside the enclave to protect civilians and former rebels who decide to remain under state rule,” saying the Russians have done little but cause havoc in the region.

“Russia turned everything upside down. You ought to know what has happened in Dara’a: First of all, Russia came with heavy airstrike raids, 100-200 raids a day. This is the way that Russia obliges the Free Syrian Army to surrender. This is not a war. It is an elimination for southern Syria. You have two choices – die or accept the Iranian militia, with Assad,” he said.

Despite his faith in Israel’s humanitarian credibility, the source was critical of Jerusalem’s refusal to either allow Syrians across the border or to enter Syria in order to protect civilians. He cited rumors that Israel had given Alexander Bogdanov, a Russian official tasked with negotiating a ceasefire agreement in southern Syria, a “green light to ‘take over’ all of southern Syria” and to demolish the Free Syrian Army, a minor rebel group widely believed to be on the verge of collapse in the southern part of the country.

Asked about Iranian forces in southwestern Syria, the source said he is “certain” that Iranian and Iranian-backed forces are prevalent throughout the area, though he failed to describe what distinguished the Iranians from Arab fighters (he said they do not usually speak Farsi). He added that local residents face nearly as much danger from an ongoing Iranian entrenchment in the area as Israel and said he would like a third party to facilitate a post-civil war peace.

“We prefer (to have the Israelis) collaborating with the Russian or the Americans… we are ready to give you a checkpoint to prevent any Iranian intervention in southern Syria. We are prepared to give you three or four hills along the disengagement line,” he said.