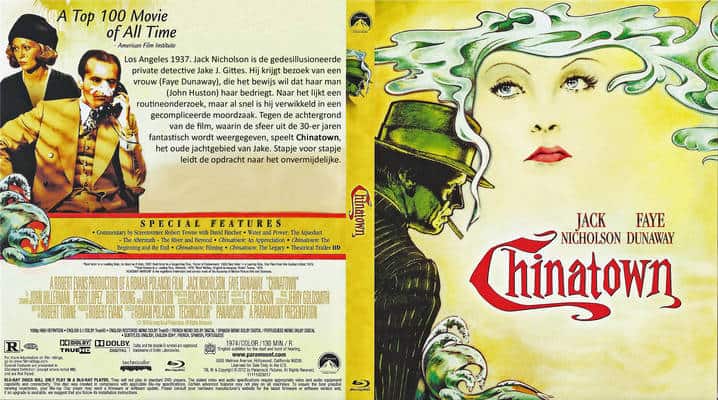 As far as I’m concerned, this is director Roman Polanski’s greatest achievement; a superb, densely plotted 1974 noir thriller that is not merely artistically brilliant, but also holds up an astonishing mirror to the time it was made, as well as offering timeless and profound spiritual insights. The screenplay, by Robert Towne, is frequently cited as one of the finest ever written; possibly the finest, alongside Casablanca.

Chinatown also features one of my favourite ever Jack Nicholson performances, as private detective Jake Gittes. Jake is initially hired by Evelyn Mulwray to spy on her husband Hollis, builder of LA’s water supply system, whom she believes is having an affair. Gittes photographs the evidence but in the ensuing scandal, it appears Jake was hired by an impersonator and not the real Evelyn Mulwray (Faye Dunaway). Subsequently, when Hollis Mulwray is found dead, Jake ends up entangled in a complicated web of deceit, corruption and murder, eventually leading to even more shocking revelations.

“Forget it Jake, its Chinatown…”

Leaving aside the absolutely first-rate direction, use of locations, lead performances and supporting cast (even Polanski plays a key bit part), what makes Chinatown so brilliant is the understated but powerful way it delves into its key themes. For example, during a confrontation with the film’s villain Noah Cross (chillingly played by John Huston), Jake gives offers a brilliant expose on the futility of greed: “Why are you doing it? How much better can you eat? What can you buy that you can’t already afford?”

Podcaster and Christian film nerd Josh Larsen speaks of movies as being like prayers, and he has described Chinatown as a “prayer of lament” akin to Ecclesiastes. I think that makes perfect sense. When the film was made, the subject matter reflected events in some of America’s most painful years. The appalling crimes that are uncovered in the latter sections, and also the bleak finale, further hold a mirror up to a 1970s society which had come to massively distrust government in an age when the innocence of the 1950s and early 1960s had been shattered by the likes of the Kennedy assassination, Vietnam and Watergate.

“Forget it Jake, its Chinatown…” is undoubtedly a prayer of lament. It is also a superb summary of an absolutely brilliant film.