BREAKING
Catch a Ride on a Shared Scooter—“Micro-mobility” Coming to Tel Aviv Next...
Israel Military to Conduct First-ever Simulated Strike on Iran
‘Injury to the Heart of Iran’: Details on the Life and Death...
STAND WITH UKRAINE
Home Tags Posts tagged with "7-year-old"
Tag: 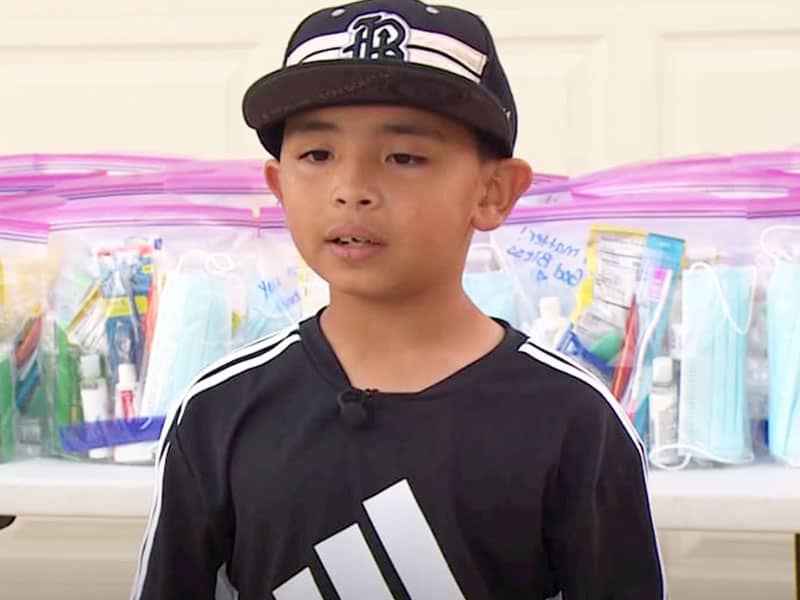 God’s goodness never stops, He even inspired a 7-year-old boy to used his birthday money to bless the homeless on Thanksgiving.

In August last year, Dylan Virtudazo was supposed to have a birthday party. But because of the pandemic, it never happened. Thus, the 7-year-old wasn’t sure how to spend the money a family friend gave him. Then, he came up with a great idea after his school teachers asked students their plans for Thanksgiving.

God Uses A Homeless Man To Speak To A Pastor

Dylan asked for support from his parents to use his savings and birthday money to help the homeless. According to his mom, he used it to buy hygiene products and snacks, choosing “the things he knew a needy person would need to feel good of themselves.” 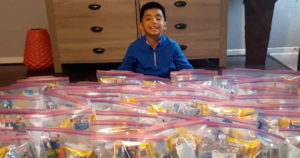 Family and friends helped him fill the 50 blessing bags for the homeless. And on Thanksgiving day, Dylan’s family delivered the bags. When one recipient found out how it was a little boy’s idea, he cried. The family in the car cried as well.

“We asked him, ‘what made you think of helping the needy?’ He replied, ‘God just made me that way,’” said Dylan’s mom. 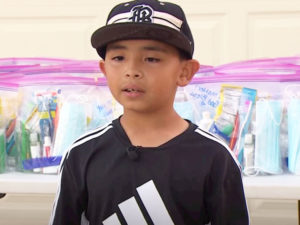 “I pray this story never ends and he continues to lead his generation by example,” she said. “If we want a better future for our children, we need to continue to water the seed God put in their hearts.”

Homelessness is a real issue. B

What Dylan did is an example of God’s will for the less fortunate. God wants to bless, help, and show love to them. This little man is indeed walking out God’s love at a very young age. 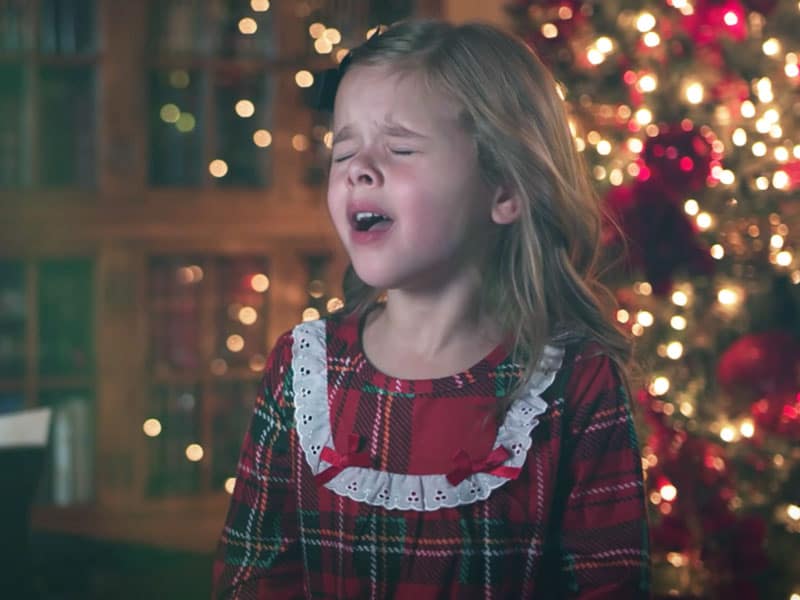 Adorable 7-Year-Old Sings ‘Have Yourself A Merry Little Christmas’

The child YouTube sensation Claire Crosby once again inspires us with her rendition of ‘Have Yourself A Merry Little Christmas,’ and it’s the cutest version ever!

Have Yourself A Merry Little Christmas

In a video shared by The Crosbys, Claire outperformed her previous vocals as she nailed a beautiful performance with ‘Have Yourself A Merry Little Christmas.’ Over the years, the little girl has been sharing her cute rendition of songs since she was a toddler. It even took her to guest star on several popular shows in the U.S., including ‘The Little Big Shots’ and ‘The Ellen Show.’

Also, in 2017, Claire’s father, Dave Crosby auditioned for ‘The Voice’ and did a live performance with her dad.

And today, the viral little girl once amazes us with her better vocals. She performed a cute rendition of ‘Have Yourself A Merry Little Christmas.’

Have yourself a merry little Christmas,
Let your heart be light
From now on,
our troubles will be out of sight

Through the years
We all will be together,
If the Fates allow
Hang a shining star upon the highest bough.
And have yourself A merry little Christmas now.

Hugh Martin and Ralph Blane originally released this classic song in 1994. But it only became popular through Judy Garland in the film ‘Meet Me In St. Louis.’

It brightened the day of many with her adorable expressions and soothing voice.

User Vicki Stineman wrote, “Wow, her voice has gotten stronger. She can really hit those high notes. She’s so special and talented. I love her and the whole family.”

Another by Sunny Huang commented, “I love how Claire’s voice was more controlled than she was little yet still keep the purity and innocent.”

Indeed, this 7-year-old is such a blessing! What beautiful music she has given us this Christmas season! 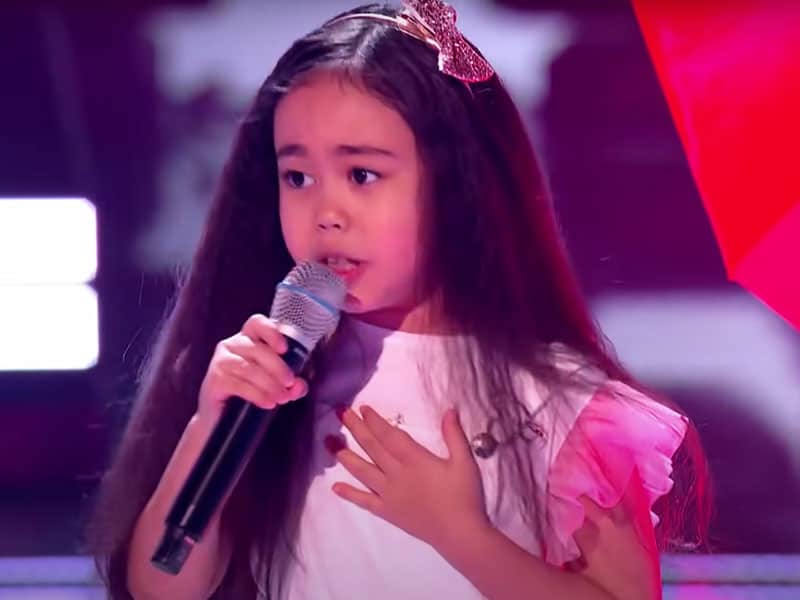 A 7-year-old adorable contender who is one of the youngest ever finalists on The Voice Kids UK stuns the show’s stage with her powerful performance of “Where is the Love.”

Victoria Alsina is the seven-year-old little girl who blew away the judges with her previous performances. Now, during her final performance, she did it again! 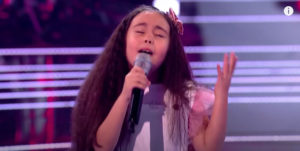 Where Is The Love Performance

With her coach will.I.am, Victoria performed Black Eyed Peas’ “Where is the Love,” a song by will.i.am’s group Black Eyed Peas on asking God for love and peace to reign in the world.

Kids From Different Nations Worship God With ‘The Blessing’ Amid Lockdown

The seven-year-old started the pop-rap song with such a powerful demeanor. She managed to perform well with her coach rapping her lines. When she rapped the lyric “Man, you gotta have love, this will set us straight” it was definitely superb – you’ll think she’s really a rapper. 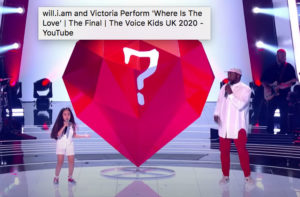 Then the little girl blew the judges away when she sang the chorus part:

“People livin’, people dyin’
Children hurt and you hear them cryin’
Can you practice what you preach?
And would you turn the other cheek?

Father, Father, Father help us
Send some guidance from above
‘Cause people got me, got me questionin’
Where is the love”

Once again, Victoria rapped on the second verse like a pro with such passionate facial expression. The seven-year-old wasn’t just singing but adding emotion and power to her performance. She did amazing with this pop-rap song even when she had only sung power ballads and pop music in her previous performances.

That’s why it’s no surprise that all three The Voice Kids UK judges Paloma Faith, Danny Jones, and Pixie Lott gave her a standing ovation. They all enjoyed her presence onstage and applauded her.

Well-deserved praise for the cutest and youngest finalist in The Voice Kids UK!

Watch her full performance in the video below.

will.i.am and Victoria Perform 'Where Is The Love' | The Final | The Voice Kids UK 2020