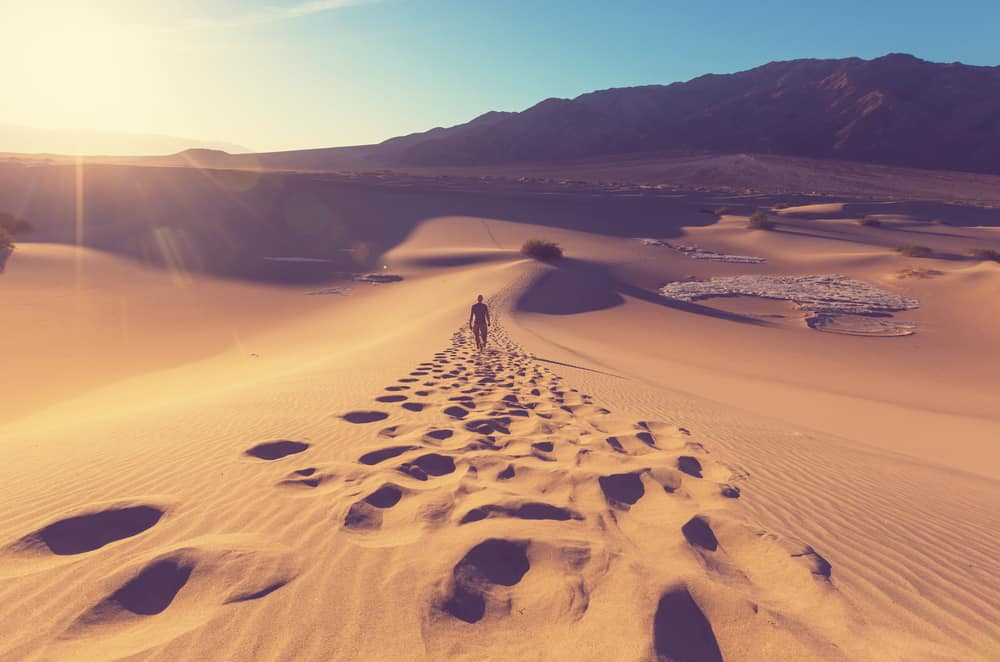 There was a man who turned his back on his city, that place where he had been brought up and where his ancestors had always lived as far as he knew. He headed north, following the river towards its source, going out into unknown open country, and dangerous places.  His family came with him, but his was the leadership gift and his was the vision; they followed him not knowing where he would lead them.

His name was Abram. Meaning “exalted father”.  His story is recorded, as we know, in the book of Genesis, said to be first committed to writing by Moses. In those pre-history days information was memorised and recited aloud: lists, genealogies and stories of the past. They were told or sung around the evening fires. Sir Leonard Woolley, the famous archaeologist, excavated Ur, Abram’s city. He dug it out from under piles of sand in the 1920s. The ziggurat, apparently dedicated to the moon god, Sin, was still there! Although Woolley is said to have had a vivid imagination coloured by his Christian belief and upbringing, he made some amazing finds (and won a knighthood). It is clear that Ur was a flourishing city, and Abram left it.

Abram was listening to a voice. In Ur they worshipped the Moon God but Abram longed to hear another voice; the voice of the One who created the Universe, the One who is God above all gods. His Name in the Hebrew is one that Jews will not attempt to pronounce, the name later revealed to Moses at the burning bush – it means “I am” and it uses the root of the Hebrew word “to be”. When Abram began to listen, he perceived that he must get outside Ur to hear better, so he went on his journey and as he went he kept calling on the All-Living One. As he listened he heard and believed that he was going to a land “that I shall show you”. There came a promise…an amazing promise…

“I will make you a great nation.  I will bless you and make your name great; and you shall be a blessing.  I will bless those who bless you, and I will curse him who curses you, and in you all the families of the earth shall be blessed.” (Genesis 12:1-3)

His family had made their living in Ur, but they now became nomads. They acquired flocks and herds, lived in tents, and moved from place to place. They followed the course of the Euphrates until, quite near the source, Abram’s father died. I can’t help but wonder if Abram and his family thought they were going to find the fabulous garden – Eden – the place from which Adam had been banished. Surely Eden and the story of the garden were often talked of around their campfires. The Euphrates and the Tigris, had sprung from there (together, with two other rivers the Pishon and the Gihon which have disappeared, though there are traces of ancient river beds in that region, only to be seen from the air). The idea of the garden planned in four parts has persisted throughout history. Did Abram think, at first, that his quest would be to find the Garden?

Then Terah died. Abram was now the Head of his family. The story we have been told never explains why they then changed direction. The little family group did not go further north, but turned west. Did God tell Abram that Eden was not to be found on Earth any more? It is not recorded, but somehow Abram knew that he was to head west, and they came to the land of Canaan, going as far as Shechem – to the terebinth tree of Moreh. These were days without maps. Trees and rocks were used as markers of the way, rivers and mountains were boundaries.

At Shechem the Lord, the Living One, appeared to Abram – think of that! Think how far Abram had travelled in faith! At last he was given the certainty and confirmation that this was the land God had in mind for him and his descendants.

From this time the details of Abram’s relationship with God are given to us in the book of Genesis  – a fascinating and unique history. What other nation has kept its early records with such care? In the Torah we have not only lists or details of battles, but the personal story of a man’s discovery of God. The nations who are credited with the invention of writing have nothing at all like this.  The tombs Sir Woolley discovered in Ur showed that some were buried with many rich possessions and attendants (as they were in Egypt). They show that, like the Egyptians, they were people without hope. Their great city vanished under a pile of sand; their gold ornaments and their images of gods and goddesses have come to nothing; they have been dug up and brought to museums.

In contrast, Abram’s vision has never died. God added, “Ha!” to his name and his story is still being told, and not as a fabulous tale like the Iliad, the Odyssey, and such, but as history, and as a spiritual triumph. Yet it has been attacked through the ages.

Now this is where the “mystery” of my title comes in.

It is a mystery why the Jews, Abraham’s descendants, have been so persecuted throughout history, and yet they have survived. Why have so many nations tried to wipe out this little nation? From the Egyptians to the Assyrians, the Babylonians, Greeks and Romans, the Ottomans, the Crusaders, the Spaniards – Ferdinand and Isabella with their Inquisition, the pogroms in the eastern bloc of Europe, the Germans under the Nazis, and in our own day, the Jihadist Muslims. None of them could make the land flourish and it lay desolate time after time, until the Jews claimed it back.  But now, it seems, all Hell has been let loose to try to turn them out.

It is all a mystery – a pilgrimage from idol worship to the Living God; from the fabulous Garden of Eden to the little land of Canaan; the founding of a nation that would stand for Him, and provide a Way for Him to reach the whole world. Reading its history we can follow how it went wrong, then was put back on course, went off again and so on. Amazingly the words “The Promised Land” are now part of our language. The promise of blessing that Abraham received came true and is still coming true as the Messiah of Israel has become Christ to people all over the world. Today in Israel large numbers of Jews are turning to Him at last. Christians and Jews are being reconciled: Christian Arabs are being enabled to overcome the hatred with which they had been indoctrinated.

You know, Joseph and the Amazing Technicolor Dreamcoat is a great show and I can watch it any time, but there is one song that does not ring true: “Any Dream Will Do”. Brilliant as the song-writer was, he didn’t get the message at all. A dream can help you to overcome, yes. But if it’s going to last 4000 years or longer, any dream won’t do! It has to be the dream of Him who was, and is and is to come.

In the Promised Land history, fable and mystery come together and are one.

This article was written by Dorothy Webb Davies.