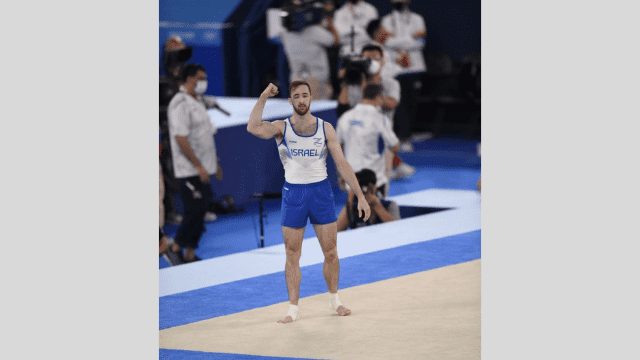 Record-setting Medal Count for Israel at Olympics and More Possible

Israel has made three trips to the podium so far in the 2020 Tokyo Summer Olympics, including a gold medal for Israeli gymnast Artem Dolgopyat. Before these games, Israel had managed at most two medals out of any Olympics and a total of only nine medals throughout all the games since they first sent a team in 1952.

On Monday, 24-year-old Artem Dolgopyat won the floor event in men’s artistic gymnastics. At the medal ceremony, as Dolgopyat stood at the top of the podium with the gold medal around his neck and Hatikvah—Israel’s national anthem—playing, he said it was hard to take it all in. “I didn’t really believe it in the moment. I couldn’t believe it was happening. And I still can barely digest it and believe it.”

Dolgopyat received a hero’s welcome Wednesday when he arrived at Ben Gurion International Airport. Friends and family greeted him with gold balloons, champagne, and blasts of the shofar. Dolgopyat seemed to still be adjusting to his instant celebrity status. He has received congratulatory calls from Israel’s prime minister, president, and Israeli actress Gal Gadot.

“Until now, I definitely wasn’t well known or recognized. I want to continue to be modest the way I am and not think about the things around me and just do my work. I think bringing honor to the country and getting medals…is much more important than everything else,” Dolgopyat said.

The gold medalist is already turning his focus toward the 2024 Olympics. “we’re not going to stop. We’re going to move forward with our focus on Paris and get ready for that and bring honor to the country.”

Much to his chagrin, Dolgopyat’s mom brought the country’s attention to her son’s personal life Sunday in an interview. She lamented that her son and his fiancée cannot legally marry in Israel because of his “no religion” status. Dolgopyat’s family immigrated to Israel from Ukraine when he was 12. His father is Jewish, and his mother is not. Even though they’re all Israeli citizens, the Chief Rabbinate does not consider people without Jewish mothers officially Jewish. The rabbis say that Jewishness is through the mother, though a case can be made from Torah that it is through the father. And the Israeli law of return allows anyone who is one-quarter Jewish to make Aliyah (immigrate to Israel).

Therefore, Dolgopyat’s legal status is “no religion.” There are no civil unions in Israel. All marriages are performed by a religious court, whether it is Jewish, Muslim, or Catholic. Dolgopyat and his fiancé, like thousands of other Israelis, would have to have a civil ceremony in another country to be legally married. Most Israelis will travel to Cyprus for this.

This is a longstanding, touchy subject in Israel and one that the new government, especially Foreign Minister and alternate Prime Minister, Yair Lapid, is promising to change. “I will fight with all my might for civil unions for couples. It’s intolerable that someone can fight on our behalf in the Olympics, represent us and win a gold medal and not be able to get married in Israel.” Now that there are no Orthodox parties in power, the new government could overturn this archaic law.

Israel fielded a baseball team in the Olympics, one of only six teams to make it to the games. The Israeli team lost to South Korea and the US before winning against Mexico. There were hopes of a comeback, as the 24-member team—made up of primarily American Jews—took the field against the Dominican Republic. But a hard-fought contest ended in a 7-6 and 5th place finish for Israel.

Israel’s biggest hope for a medal as they headed into the games was Linoy Ashram. She is an Israeli rhythmic gymnast who is currently ranked number one in the world. Ashram is set to take the Olympic stage with her hoop, ball, clubs, ribbons, and powerful moves on August 5.