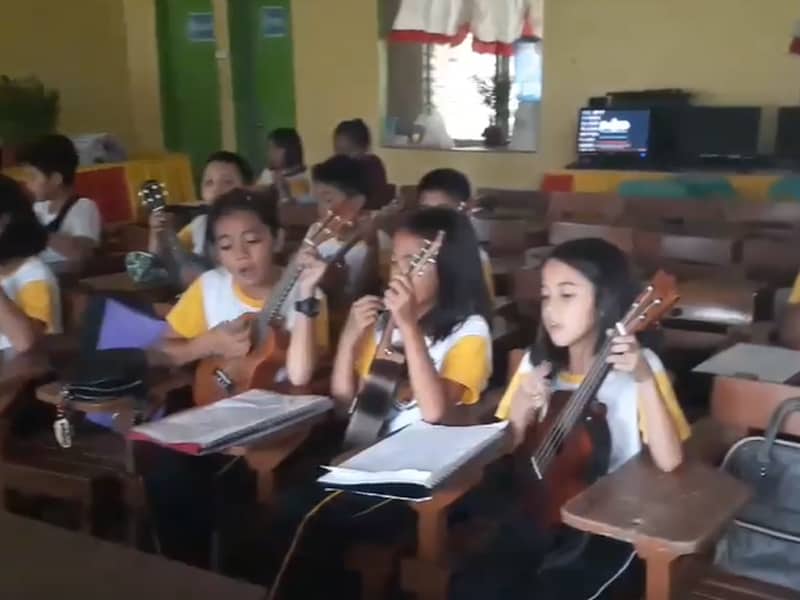 Grade school students sing the worship song “Way Maker” while playing the ukulele inside their classroom.

Just as a verse in Psalms says that there is power in the praises of children, these grade school students in the Philippines are demonstrating that power by singing praise right inside the classroom.

Psalm 8:2 – From the lips of children and infants, You have ordained praise on account of Your adversaries, to silence the enemy and avenger.

These children are students at Baroy Central Elementary School, a public grade school in the Philippine province of Lanao Del Norte. Led by their Christian teacher, Janice Faith Carcedo – Dayhop, they learned how to play the popular worship song “Way Maker” on the ukulele.

This touching moment was recorded on a video and was uploaded on Facebook. It has blessed thousands of people and was shared over 700 times in just 48 hours. Watch the moving video below:

“Way Maker” was written and originally recorded by a Nigerian Gospel singer, Sinach, in December of 2015. Since its release, many Christian artists are creating their own rendition of a worship song. Artists including Steffany Gretzinger, Leeland, Paul McClure, Caleb and Kelsey, and Michael Smith.

The song is about worshipping the Lord no matter what your circumstances may be because you trust that He is with you always. No wonder, it has become a popular worship song that is commonly sung in churches worldwide. The original music video by Sinach now has over 140 million views on YouTube.