BREAKING
Catch a Ride on a Shared Scooter—“Micro-mobility” Coming to Tel Aviv Next...
Israel Military to Conduct First-ever Simulated Strike on Iran
‘Injury to the Heart of Iran’: Details on the Life and Death...
STAND WITH UKRAINE
Home Tags Posts tagged with "Ben Roethlisberger"
Tag:

In a virtual event called ManUp Pittsburgh, Ben Roethlisberger shared how God changed his life. Urban Impact hosted the 90-minute conference. The group’s mission “encourages and teaches men to be godly leaders for their families. And raises awareness of the devastating impact of fatherlessness among youth today.” 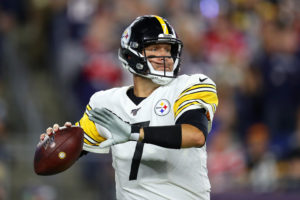 Admitting His Past Mistakes

The pro-athlete recounted, “I just felt that I needed to do that. I wanted to have a closer walk, a better relationship with Jesus, with my wife, with my kids, my family, become a better person.”

“It’s not always easy,” the 38-year-old confessed. “People don’t realize all the time that us athletes, we’re human. We sin like everybody else. I am no different. We make mistakes. We get addicted to things, we sin. We’re human. I think sometimes we get to put on this pedestal where we can’t make mistakes.

Ben revealed it hasn’t been long since he got baptized again. Three years ago, he rededicated his life to God and got over his issues.

Also, the longtime Steelers quarterback reminisced how he grew up in a Christian household. And during middle school, he gave his life to Christ for the first time. However, his faith waivered after going to the University of Miami in Ohio to play football.

More so, Ben admitted that his faith wasn’t strong even though he grew up in a Christian family.

“It wasn’t like I stopped believing, but you’re not sharpening your skills, you are not reading the Bible. I’m still praying here and there, but I wasn’t as strong of a Christian in college as I wish I would have been like my wife was. I am jealous of her that she was so devout in college,” he said.

When Ben rose to fame in the Super Bowl, scandal after scandal broke out about him. His faith wasn’t even his priority. Not until he married his wife, Ashely Harlan, in 2011.

Today, the Christian athlete put God back at the center of his life. And he no longer dwells in the kind of mess he was in the past. Now, Ben is testifying to the world how God’s grace carried him through and will continue to carry him through in this lifetime.