BREAKING
Catch a Ride on a Shared Scooter—“Micro-mobility” Coming to Tel Aviv Next...
Israel Military to Conduct First-ever Simulated Strike on Iran
‘Injury to the Heart of Iran’: Details on the Life and Death...
STAND WITH UKRAINE
Home Tags Posts tagged with "Bibles"
Tag: 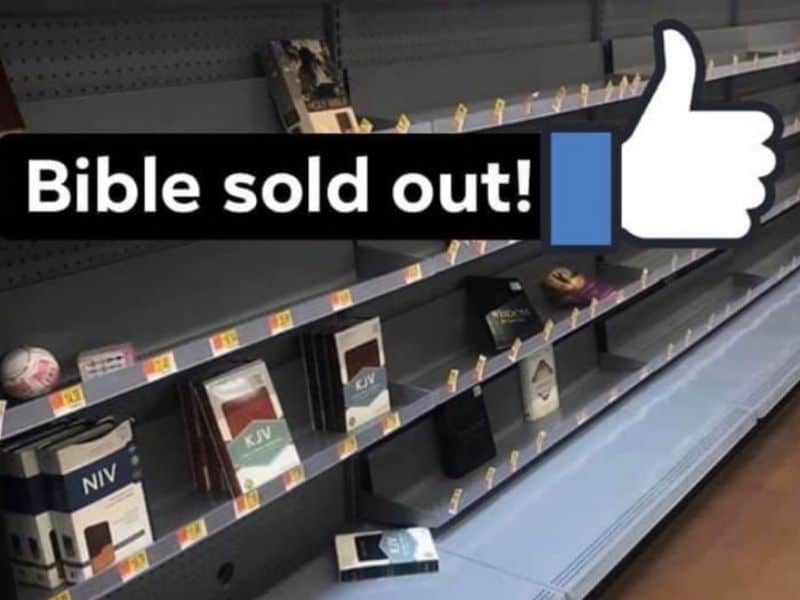 People are turning to the Bible to seek comfort amid the COVID-19 pandemic. This led to an increase of Bible sales, according to publishing companies.

Alabaster Co. is a business which sells Bibles with integration of visual imagery and thoughtful design. They reported a 143% increase compared to last year.

Co-founder of Alabaster Co., Brian Chung, told Fox News, “In this life-altering and unprecedented pandemic, people are looking for hope and restoration.”

“Even amidst suffering and financial hardship we’ve continued to see people engage with Alabaster by utilizing our free resources and purchasing Bibles as encouraging gifts for loved ones. We believe people are buying Bibles because there’s a longing to connect with God, find meaning and experience peace.”

Jim Jewell is an executive at Tyndale. He told Christian Post that the “Life Application Study Bible” sales and “Immerse Bible” sales went up, having a 44% and 60% sales increase respectively.

21.5% Of Non-Christians Say Coronavirus Pandemic Led Them To Read The Bible

“It’s not surprising that people turn to the comfort and clarity of the Bible in times of trouble and uncertainty. On [our Facebook page for the] New Living Translation, where we post Bible verse memes, engagement was triple what it was last March and up to 72 percent from just last month,” he said.

Lifeway Christian Resources is one of the world’s largest providers of Christian resources. They also reported 62% higher sales last week compared to the previous year.

Ben Mandell is the CEO of Lifeway. He said that “people often go to Bible as a source of hope in times of crisis and uncertainty.” He added, “People draw from Scripture because in it they see a God who is with us during our suffering. The Bible as God’s Words to us is a reminder that He doesn’t leave us to walk through difficult times alone.” 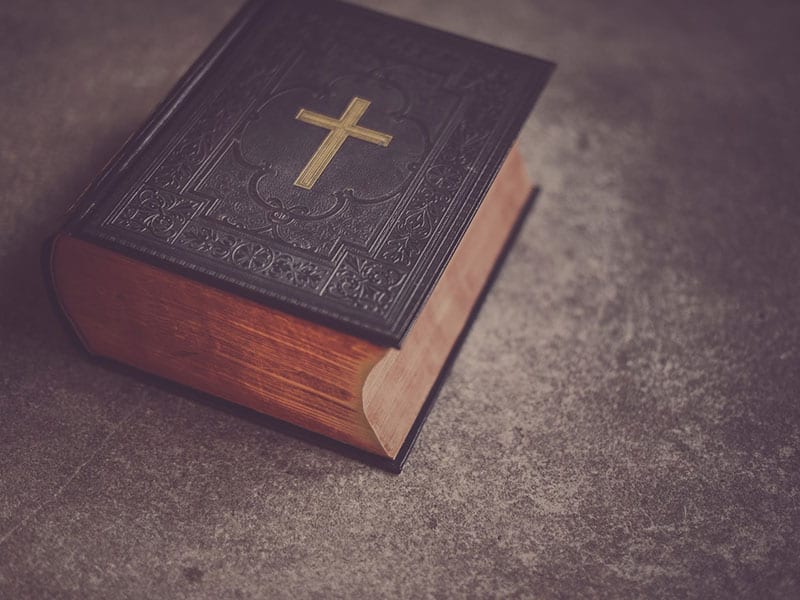 Bibles Found Untouched In The Rubble After Nashville Tornadoes

Volunteers found several Bibles untouched amongst the debris left by the tornadoes that damaged structures in Nashville, Tennessee.

In the early morning of Tuesday, March 3, tornadoes struck Nashville, Tennessee. They destroyed a number of homes, churches, businesses, and other structures. And unfortunately, the death toll from the tragedy reached 25 on March 5, according to Christian Headlines.

On March 4, in the aftermath of the Tennessee storm, responders, rescue personnel and volunteers went to ground zero. USA Today reported that these people went to the “hard-hit neighborhoods” to unearth belongings and mementos to help the victims. So they sifted through the debris in every home in that neighborhood.

And Bibles were among the debris. One Bible had the owner’s name inscribed on it along with a date. Perhaps the recipient received the Holy book as a birthday present or during a remarkable event in his life.

The storm took 18 lives in Putnam County. It is where the tornadoes struck hardest. And its is also one of the places where a responder found a Bible. Officer Denton of the Sparta Police Department has said to have found the Bible unharmed.

“There’s not a page gone in this Bible,” Office Denton told Amanda Hara of TV station WVLT. “It’s a family Bible. We’d like to find out whose family Bible it was.” 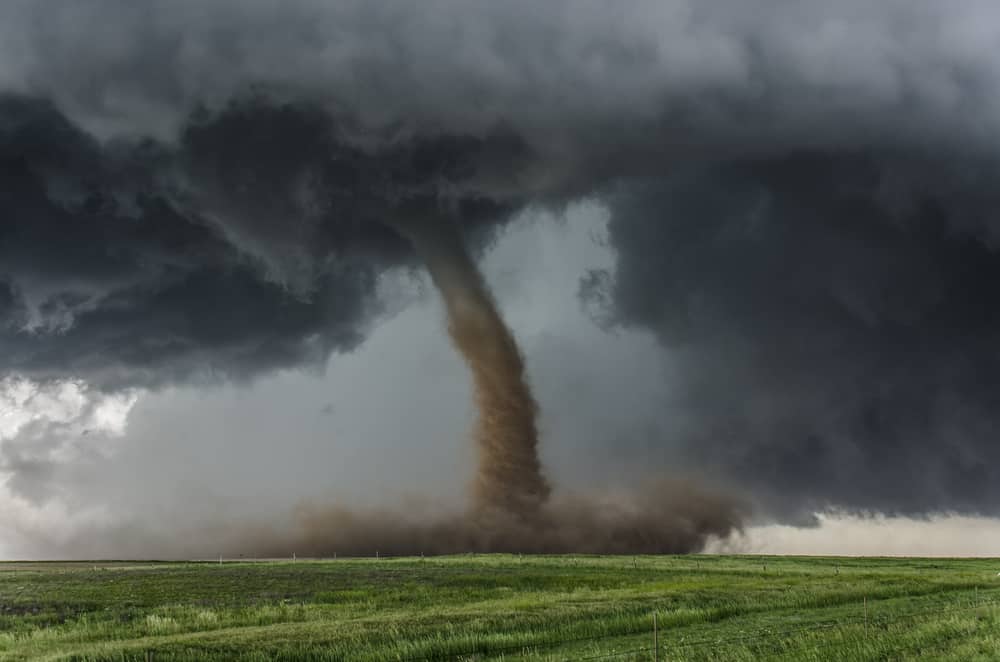 These searching crews are reported to have been “collecting items like that Bible and will try to get it back to the rightful owners. Officials said crews found two other Bibles, also untouched.”

Moreover, the officer revealed that he found a Bible that “had been presented to Mary Evelyn Randalph (or Randelph) in 1946.” And he asked the WVLT reporter to help him find its owner.

“You guys have a better shot at getting them back to their rightful owners than we do,” he told Amanda during the live report from the disaster area.

And a lot of more Bibles were found in the rubble of homes, churches, and structures around Nashville, Tennessee.

The city has been more likely referred as “buckle of the Bible Belt.” Because it is the home of over 700 churches.

Read Also: Where Is God? Finding Jesus During A Natual Disaster 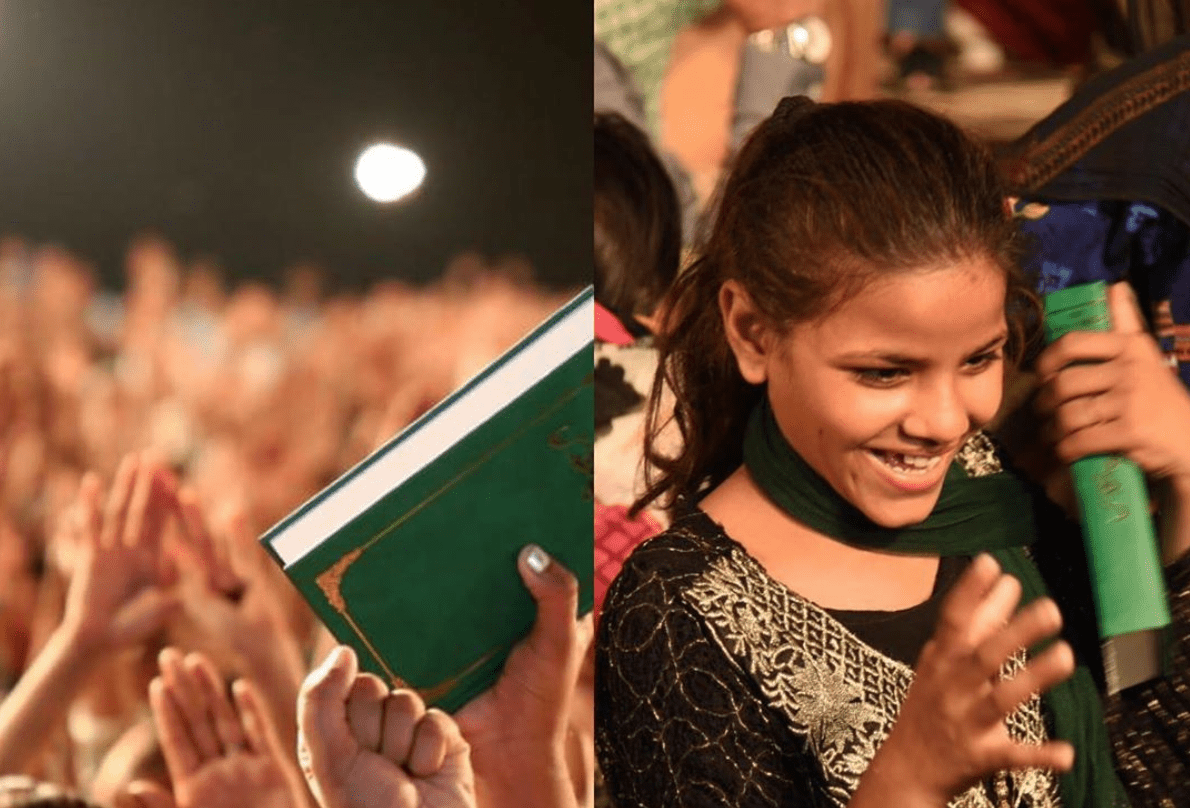 In a recent Instagram post, Robby Dawkins reveals the answer to this question.  Dawkins is an international speaker and teacher with a heart for muslim countries.  His social media feed is often filled with testimonies of healings, salvations, and miracles from across the globe.

Dawkins is one that definitely has “beautiful” feet and he is equipping others to Do What Jesus Did and Do Greater Things. He’s even written two books about it!

A Bible.  Dawkins encourages his followers, “I pray we treasure and value the Word of God like never before. The hunger for the Word of God in closed countries is so strong. One of the first questions they ask you when you enter the boarder of North Korea is, ‘did you bring any Bibles with you?’ They they search your bags so any you brought with you can be seized. Let’s value Scripture again to the point that we put aside editing it to be Politically Correct or palatable to the culture. ”

He’s got a good point.  For first world countries Bibles are readily available. Many believers own multiple copies. Let’s not take the Word of God for granted.  After all, it is living and active (Hebrews 4:12) and our belt of Truth (Ephesians 6:14). In John 8:32 we are promised, “you will know the truth, and the truth will set you free.”  In other words, reading the Bible, which is Truth, sets us free!

Next time you pick up your Bible to read imagine Christmas morning. Imagine believers in closed countries who wish they had the book that is resting in your hands.  Give thanks as you open Truth and receive freedom as you read! 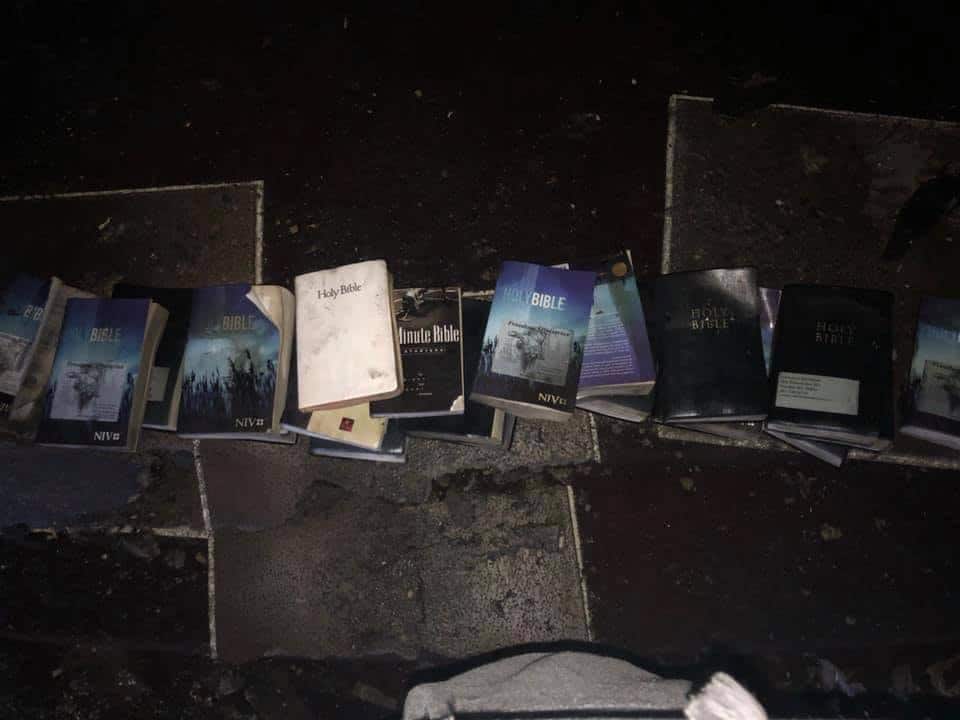 In the dead of the night on March 3rd, a church in Grandview, West Virginia caught fire and firefighters rushed to the scene to discover a miraculous sight.

The flames whipped through Freedom Ministries Church reducing the beloved building to all but ashes. As the firefighters combed through the debris and wreckage, they found crosses and Bibles untouched by the fire. 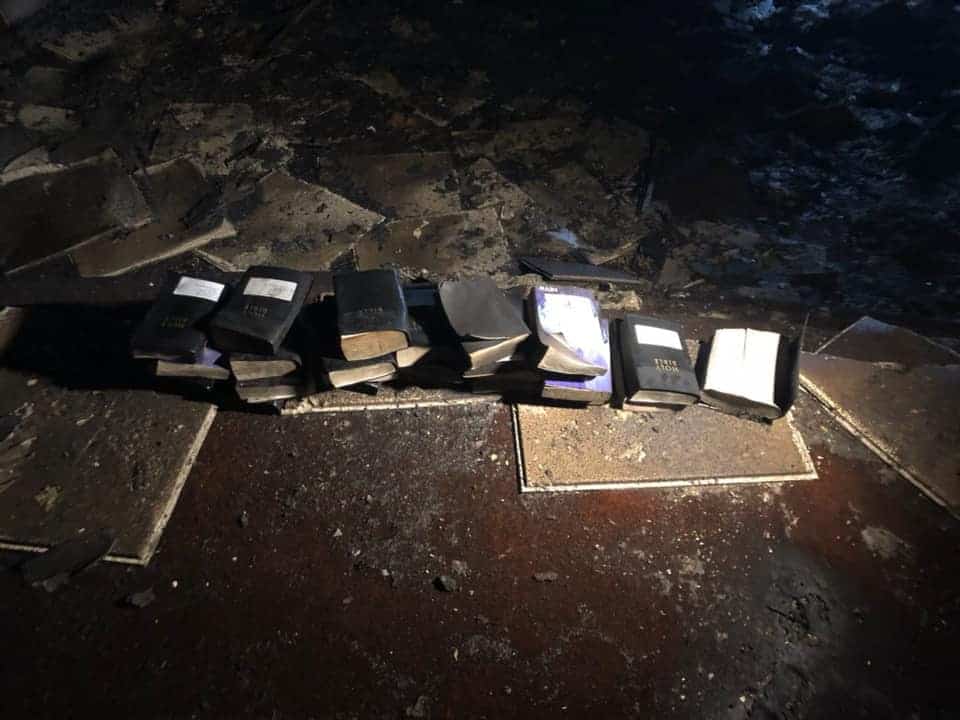 “In your mind, everything should be burned, ashes. Not a single bible was burned and not a single cross was harmed!!” said the Coal City Fire Department. 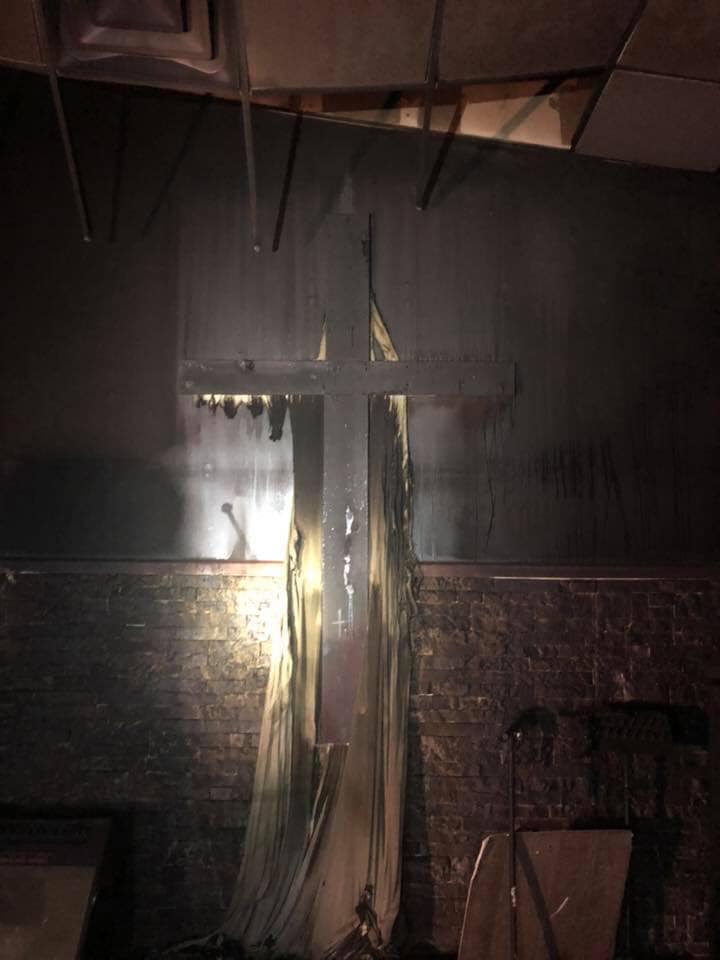 “Though the odds were against us, God was not.”

While they’re still investigating the cause of the midnight blaze, all are thanking God that no firefighters or congregants were injured in fire.

Please pray for the pastors and Freedom Ministries Church community as they rebuild the church home. May God use this to His glory!