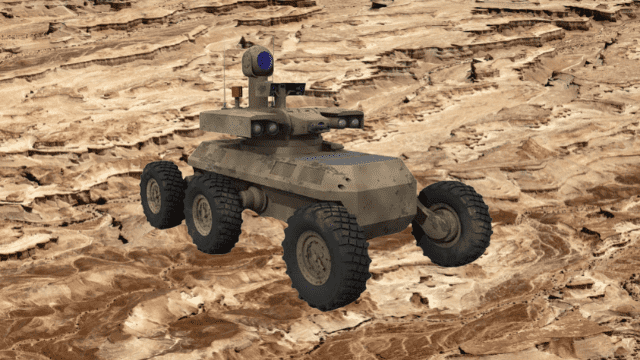 A “Jaguar” To Patrol Israel Border With Gaza

Instead of having soldiers in harm’s way, targets for Hamas terrorists, the Jaguar will soon be on patrol along Israel’s border with Gaza. No, not a literal jaguar, as in the spotted fast cat in the Amazon or the sporty, fast car, but the Jaguar, the Israel Defense Forces new semi-autonomous, robotic, ground vehicle.

The Jaguar has dozens of sensors, a six-wheeled chassis, an electric motor, and a machine gun. This newest addition to the IDF Gaza division was developed over the last year and a half in a cooperative effort between Israel Aerospace Industries and the IDF’s Ground Forces Command.

The robot has high-resolution cameras, sensors, transmitters, and a remote-controlled PA system. The Jaguar operates under human control; however, it can also map out its own route, drive itself to the destination, and avoid any obstacles in its path. Should it fall into enemy hands, the Jaguar can transmit its precise location to a drone that can then destroy it.

Using a robot instead of soldiers to patrol the volatile Gaza border may save lives. “We have led a groundbreaking technological development—an independent robot that reduces the combat soldier’s friction with the enemy and prevents risks to human life,” Lieutenant Colonel Nathan Kuperstein, the head of Autonomy and Robotics at the IDF’s Land Technology Division. “It even knows how to recharge itself—almost like an iRobot.”

Israel’s recent Operation Guardian of the Walls—a strategic response to Hamas’s 11-day missile attack—has been hailed as Israel’s first “Artificial Intelligence War.” The IDF utilized a variety of robotics and AI machine learning to combat the enemy. It is all part of Israel’s long-term commitment to turn its military into a deadly, high-tech fighting force.

Hamas has unwittingly helped Israel make peace with many Arab nations. Their terrorism, from rockets to suicide bombers, has forced us to be creative in combating them. That has led to great technology, like the Iron Dome, the Jaguar, and our new laser anti-missile system, that other countries are eager to get.