BREAKING
Catch a Ride on a Shared Scooter—“Micro-mobility” Coming to Tel Aviv Next...
Israel Military to Conduct First-ever Simulated Strike on Iran
‘Injury to the Heart of Iran’: Details on the Life and Death...
STAND WITH UKRAINE
Home Tags Posts tagged with "Brain Tumore"
Tag: 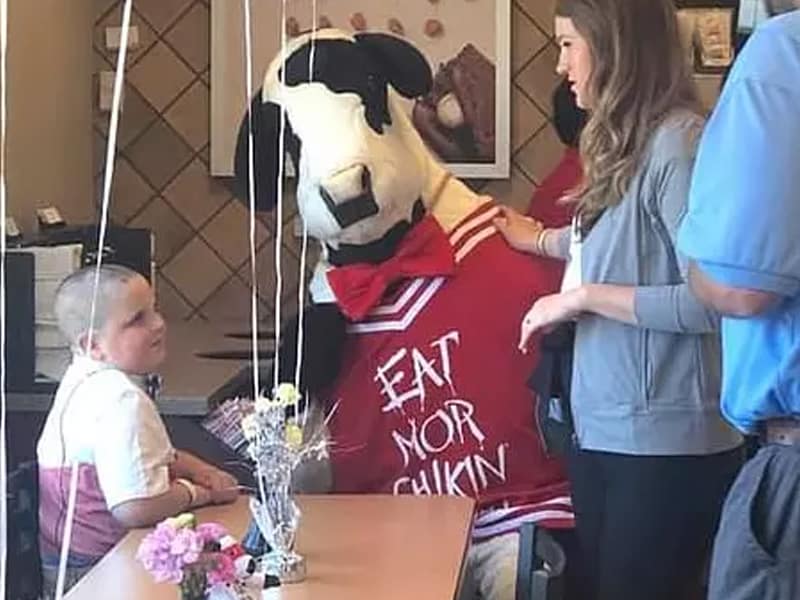 Chick-Fil-A breaks its “Closed on Sundays” rule to deliver a special meal to a little boy with a brain tumor. The child’s reaction is worth all the sacrifice of this branch of the famous Christian-owned fast-food chain.

Chick-Fil-A has a firmly held policy that it has faithfully followed since first opening in 1946. Founder S. Truett Cathy made a rule that every location should be closed on Sundays. This was done to give employees a day-off from work and to respect the Biblical day of rest.

For over 70 years, every Chick-Fil-A location has been closed on Sundays but on Easter Sunday of 2019, one branch opened in an act of true Christian charity. This reminds us of the example of our Lord Jesus who made exceptions to Sabbath observance by bringing healing on this day of rest!

Danny Agee, 10, is suffering from a brain tumor and was scheduled for surgery on Easter Monday. The night before his operation, Danny’s breathing tube was removed and he was able to talk to his family, drink liquids and eat real food. He made a request for his favorite food: a chicken nugget meal from Chick-Fil-A.

“We had to remind Danny that it was Sunday so he wasn’t going to be able to have that,” Danny’s father, Joey, shared.

An order fulfilled by God

But a pediatric ICU nurse, Jenny Pearce, couldn’t ignore the young patient’s request and was determined to find a way to get Danny his Chick-Fil-A meal.

“Now I don’t fully know what connection she has because I was out of the room, but God is so good to us that somehow through Jenny and the amazing leadership at North 31st St Chick-fil-A, my son Danny got nuggets delivered not only on a Sunday but on Easter Sunday,” Joey said.

It turned out that the Chick-Fil-A manager was the one who made a way to deliver a chicken nugget meal to Danny, together with the ‘eat mor chikin’ cow mascot. Danny cried upon seeing that his request has been granted.

His surgery went well and he is now recovering smoothly.

If you were inspired by the heroic act of this Chick-Fil-A manager, share this story with all!