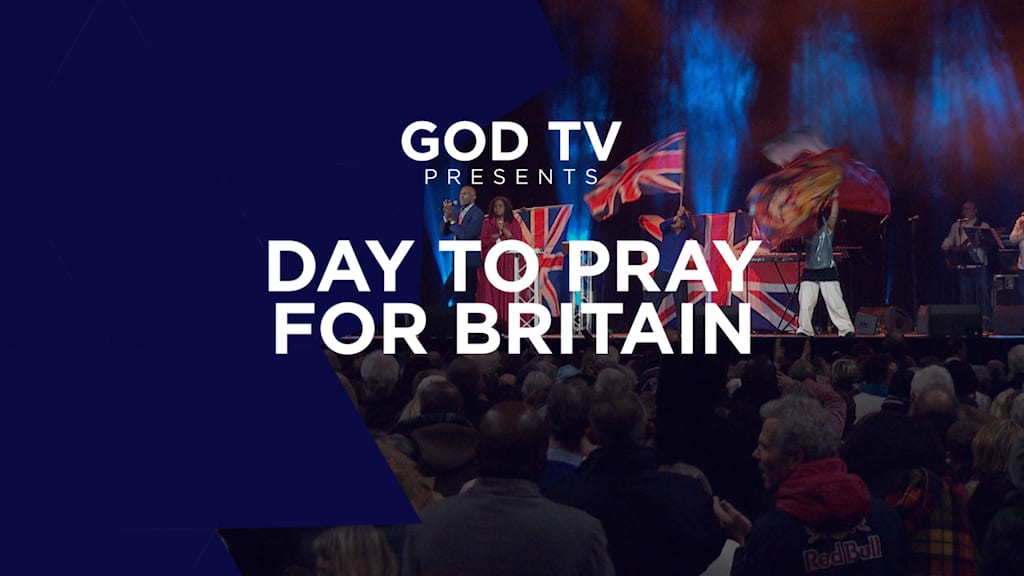 As the UK stands at a crossroads GOD TV presents a day of prayer for national unity and God’s hand to preside over the future of this global power that has colonised much of the world, retaining a far-reaching influence over the Commonwealth of nations and with a permanent seat on the UN Security Council.

Three years after its fateful referendum the UK still faces huge challenges over the uncertainty over Brexit.  This is whyy thousands of Christians came together in London on Saturday January 26th to pray for an end to the confusion and for healing and unity. Now GOD TV presents viewers with an another opportunity to participate in this historic event and pray and intercede for the nation.

Join us as part of the army of intercessors needed to bring the British Isles back to God!

Hosted by David Hathaway of Eurovision Ministries along with diverse church and ministry leaders, the speakers include American prayer warrior, Lou Engle known for TheCall solemn assemblies and The Send. GOD TV presents special events like this from various countries and it’s always good to have such a diverse gathering of local and international Christian leaders.

Land Of Hope And Glory

The British Commonwealth has been used by God as a powerful vehicle to take the Gospel to the nations of the earth and throughout the Commonwealth the song Land of Hope and Glory has been sung as an anthem. Nothing could be more fitting therefore than to sing this nostalgic song as a prayer right at the start of the Day To Pray For Britain.

“Today our prayer comes from a line in this song,” says David, “God, who made thee mighty, make thee mightier yet!” He explains that The UK is facing the greatest challenge since the Second World War and how the enemy has come to bring confusion but that every believer needs to claim the nation back from the devil.

“Our primary objective in gathering today is to lift up the Name of Jesus and proclaim Him to be Lord and King over this land,” he says.

Soloist Huw Priday then leads the mass crowd gathered at the SSE Arena, Wembley in a specially re-worded version of the classic. “We’re proclaiming Jesus, high across this land / Nothing shall prevent us, by our grace we stand / Like a mighty banner raised across the sky / Drawing men to Jesus, never more to die.”

Also at the event, GOD TV presents international speakers that include: Lou Engle and Sharon Stone from the USA; Barry Segal from Israel and Berthold Becker from Germany. With worship led by Phil Woolley and the worship team from Truth Vine Church, Wembley led by Betty King.

“GOD TV is pleased to partner with David Hathaway, Betty King and many others to stand together as a nation and pray for our leaders,” said Regional Director for the UK & Europe, Fergus Scarfe. “We see this as a key opportunity to come together in unity and be the peacemakers God has called us to be.”

Stay tuned to our website for the many more LIVE events and conferences that GOD TV presents from many different countries. You can also see the Top 10 events GOD TV presents both in the USA and internationally.