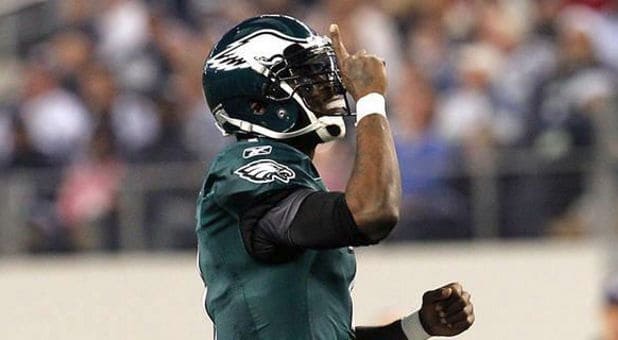 Hyper-athletic double-threat quarterback Michael Vick, who plans to sign a one-day contract and retire with his original team – the Falcons – this year, recently spoke out about rediscovering God in federal prison.

After having achieved stardom, Vick had lost himself in illicit activities, namely dogfighting, and was indicted, convicted, and sentenced to serve almost two years in a federal prison beginning in 2007. Since then, he has resurrected his career, playing a total of seven additional season with three different teams.

But what is more profound than his restored post-prison career is that Vick doesn’t begrudge his time in prison. Instead, he views it as a humbling experience – a divine blessing, in fact. Read on to discover just how God used a prison sentence to melt Vick’s hardened heart.

A Slow Fade From Faith

Vick grew up in a Christian household, even sleeping with the Bible tucked under his pillow throughout his childhood. He frequently asked God to fulfill his dreams of going to college and playing pro-ball. Ironically, when his prayers were answered, Vick drifted from his gracious Heavenly Father.

In an interview with Associated Press sports reporter Rob Maadi, Michael explained, “”There was a time when I was starting to feel like, ‘Ok, I made it. I arrived. That’s it.’ In all that, you start to think about what is really important. You start to think that money is more important and chasing money is more important and contracts that you have — companies and appearances and staying out late and not working as hard as you can.”

Feeling invincible, Vick never dreamed that he would be indicted for his involvement in the dogfighting ring “Bad Newz Kennels,” which led him to house over 70 dogs on his property in Virginia. But that’s exactly what happened.

Vick’s federal prison sentence cost him two football seasons in the prime of his career. But according to Vick, “I knew it was God the entire time. When I was going through everything that I was going through, I just felt for a long time that there was a black cloud over my head, there was nothing that I could do right. I knew the things that I was trying to hide from was finally catching back up with me and it showed me that God was real, that you are not bigger than anybody, not better than anybody.”

Taking full responsibility for his poor choices, Vick commented, “I had plenty of chances to do the right thing and I didn’t do it right. It was all about just putting myself in a position where I could see life in a different form.” Indeed, prison did put Michael in the position to uncover a much more divine perspective.

While in prison, Vick rediscovered the Bible that he had turned to so often in childhood: “The book of Jeremiah, the book of Job was extremely important in my walk and my understanding. The book of Psalms was very powerful. I leaned on the book of Psalms in my toughest and my most sorrow moments when I felt like I had no fight left. Those were the nights that I read those scriptures and was able to wake up a new man the next day,” Vick remarked. “I always seemed to get broken down and have to resort back to the Bible and resort back to reading it as a form of comfort and that comfort came from the man upstairs.”

An Answer to Prayers

During his time in prison, Vick fervently prayed for a second chance. And just as God answered his childhood prayers, He came through again – rejoicing at the return of His prodigal son! Vick explained, “I got that second opportunity … The promises that I made to God” – to make the most of life, to learn from his mistakes, and to be truthful – “I had to fulfill those responsibilities.”

And that is exactly what Vick is doing. Not only is he speaking out about his faith, but he is also volunteering with impoverished children. He plans to explore the possibility of teaching and coaching in the NFL.

While some might still harbor resentment against Vick due to past indiscretions and question the authenticity of his spiritual transformation, it is vital to remember that everyone is on an individual faith journey. God is big enough to cover even the most egregious decisions, if only there is a repentant, humble heart.

No matter your past choices, run with arms wide open to the One who redeems, renews, and restores.