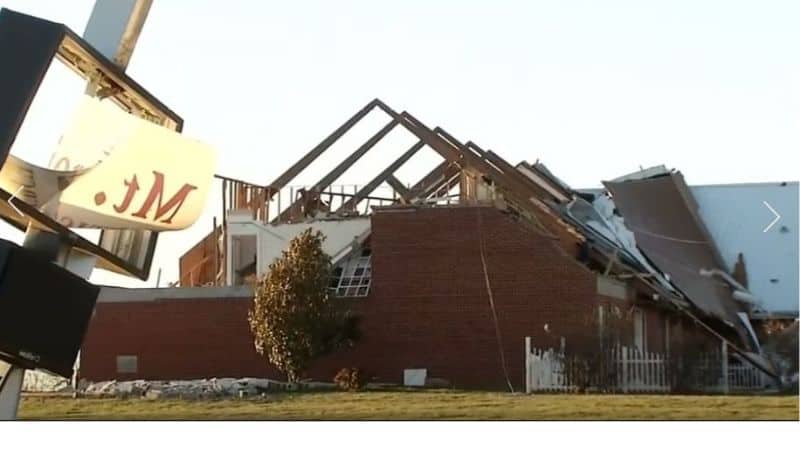 Mt Zion Baptist Church is a 50-year-old church located in McCracken County, Kentucky, USA. The church was hit by an EF2 tornado, that caused the roof to be ripped off. Thank God, all 40 preschoolers and 10 staff members who were in another part of the building at the time survived unharmed.

Powerful tornado doesn’t compare to the power of God 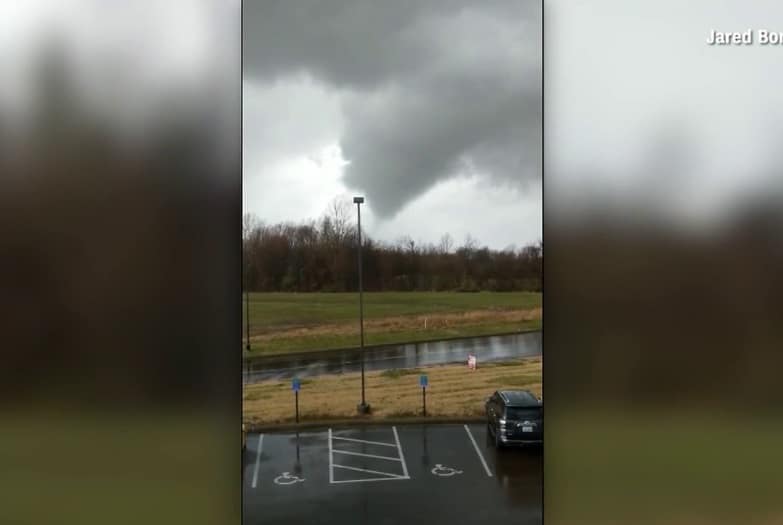 The congregation at Mt Zion are deeply thankful to God for this miraculous escape, knowing that they had God’s protection when the tornado hit the church building.

“God was definitely with us,” preschool director Michelle Rushing told news station, WPSD. “The secretary and I walked through the doors just as we heard  glass breaking and felt the suction sucking the roof off,” she added

The kind of tornadoes that have hit this community are powerful with wind speeds of up to 135 mph.

According to the Associated Press, a state of emergency has been declared in western Kentucky county. This latest tornado caused massive damage in a 5 square-mile area, pulling down power lines and leaving the roads full of debris. At least one injury has been reported.

The 40 children sang ‘Jesus Loves Me’

In an interview with WPSD, Toni Mathis, a daycare teacher who was with the kids when the tornado struck, said that they didn’t even realize what was going on outside.

According to reports, the children sang “Jesus Love Me” and “He’s Got The Whole World in His Hands,” during the tornado. 10 minutes  after it had passed the daycare teacher saw the damage and realized that indeed God was with them when the incident happened.

Inside Mt. Zion Baptist Church.. the pastor says “We are just rejoicing in the Lord.” @FOXNashville pic.twitter.com/RfjokfgfVN

Supernatural calm in the midst of the storm

Lauren Haneline, also a preschool teacher told WSPD that while the tornado hit the Mt Zion Church and she was waiting for it to pass, she felt a supernatural calmness inside her heart.

“My ears popped, and I knew this was it,” she said. “But there was so much peace and a calming in that room. I’ve never felt God’s hands on me like I felt that day. I knew we were going to be OK,” Lauren explained.

“The nursery, where the roof is gone. I mean, I have a door across the hallway, and if I just reached out, I could reach their door. It’s that close … we really were protected by God.”

“When you look at this building, and you see the destruction, and you recognize it had about 50 people in this facility when this hit and no one had a scratch on them, I think that is what really gives us the focus of what all of this tragedy is all about,” said Mt Zion’s Senior Pastor Wes Conner.

Ryan Willcut, their deputy sheriff went to the church to offer assistance. “I saw the trees coming up out of the ground and flying through the air and power lines coming up and laying down over the road,” he said. “I just kind of put my head down covered my head and prayed for the best.”

The Word of God is true and powerful. As Jesus said: “For where two or three gather in my name, there am I with them.” (Matthew 18:20). Everyone at Mt Zionis is so thankful that its members together with the kids are all safe.

Read also: Watch: Grandma Who Survived Deadly Tornado Gives Thanks To The Lord