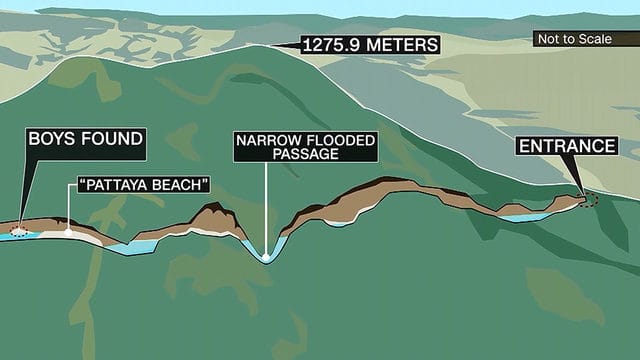 Imagine being lost in the bowels of the earth for days on end with little hope of being rescued. Then, the relief of finally being found after nine days, only to hear that you may have to stay trapped underground for months. This is a tough enough dilemma for adults but how much more of a terrifying ordeal it is for 12 boys aged 11-16 and their 25-year-old coach.

Yet this is the exact situation the young football team trapped in Thailand are facing right now, after they ventured into the Tham Luang Nang Non cave complex, only to find their way back flooded by the rising waters of the Monsoon rains. It seems the boys went exploring after a soccer game on June 23 and couldn’t make their way back to the surface a kilometre away.

Kion 5/46 News Channel illustrates the severity of the problem in the graphic above which shows the submerged passages the boys will need to venture through to escape.

The world has quickly responded with an international rescue mission, however there are no easy options to evacuate the team. The only way out is through a dangerous diving exercise, via narrow flooded passageways in zero visibility and with very little room to move especially while using oxygen tanks. Already a navy seal has sadly lost his life trying to rescue the boys and they are not accomplished divers, some of them can’t even swim.

Another option is for the boys to remain in the cave for the duration of the Monsoon rainy season, until the water subsides naturally but that seems to be the most psychologically challenging, despite the fact that the team are putting on a very brave face.

There is also the possibility that the authorities may dig a shaft deep into the mountain to rescue the boys. This is how the Chilean miners were rescued in 2010 after being trapped for 69 days, however that is a huge undertaking and will also take time. In the meantime the Thai authorities are trying to pump water out of the caves and preempt rising water levels from further downpours with more rain forecast. The BBC explains these escape options:

Pray for the Thai Cave Rescue

We thank God that these lost boys have been found and pray that He will bring them back home safely. God does not want even one to perish. Jesus is the Good Shepherd who goes looking for that lost sheep and after a nine-day search these boys have been found. They have not been found to now perish.

Let’s intercede for these boys and their coach that God would come through for them in a miraculous way, giving divine strategy to their rescuers, that He would strengthen each one of them and give them the courage to follow through on whatever rescue option is decided. We also pray for their parents in their hour of trial as they anxiously await the return of their children.

May this very real experience of what hell could be like, trapped underground, put them on a life-long quest to seek God and find salvation in Jesus.

An invitation of hope

It seems ironic that while the world’s best football teams are fighting for a World Cup title, this young football team is fighting for its very survival. It’s inspiring though, that the president of FIFA, Gianni Infantino has sent a message of encouragement to the boys, expressing the hope that they will be out in time to attend the Cup Final on July 15th as his special guests.

What an invitation for these young footballers, like their rescue it seems impossible, but it’s bound to bring them hope! For Christians we know our hope is in God and that He can make a way where there seems to be no way. A much greater invitation of hope goes out to these young men, that they would come to know Jesus and be saved in more ways than one. Join us as we trust God to do the impossible for these boys. Let’s stand in the gap for them, in earnest intercession, praying that God will bring them home safely to their loved ones. That they would truly come out of darkness and into the light.