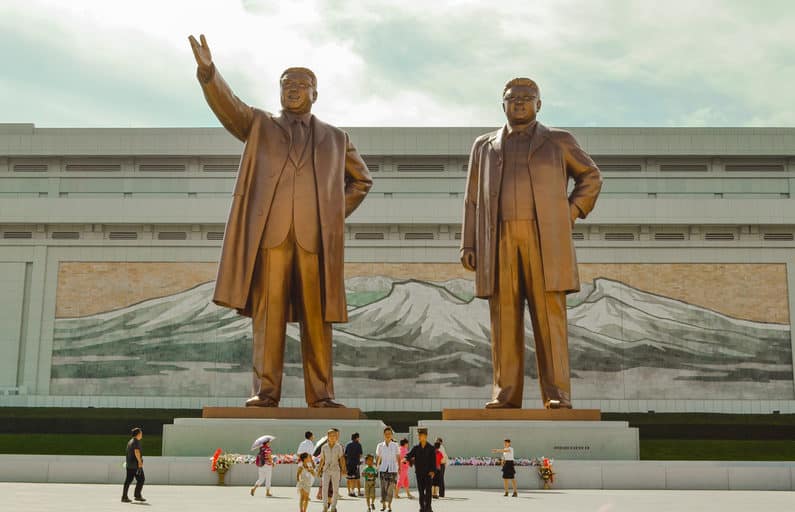 GODTV.com recently published a post about our hopes for a new day for the proclamation of the Gospel in North Korea. This followed the historic meeting between Kim Jong Un and Moon Jae-in, the leaders of North and South Korea. Now it seems North Korea is prepared to release three Christian leaders, which is unprecedented. Furthermore, a prominent prophetic preacher is saying “North Korea will open its doors to Christianity”.

For this to happen, it would be a complete turnaround, but we know that our God is able to do this. As Proverbs 21.1 says, “The king’s heart is in the hand of the Lord… He turns it wherever He wishes.” It’s so important therefore, that the Body of Christ throughout the world continues to trust God for His intervention in North Korea. We must keep praying.

CBN News reported this week that three American Christians held in a North Korean prison could soon be released. This is a huge relief for the families of Kim Dong-chul, Kim Sang-duk and Kim Hak-song who are serving lengthy sentences for ‘hostile acts’ or ‘subversion’. It seems Kim Jong Un is keen to demonstrate North Korea’s sincerity as plans unfold for a summit between him and President Trump. This would be good start, but according to Open Doors, which ministers to the Persecuted Church, there are over 50,000 Christians suffering in work camps, just because they believe in Jesus.

In addition, Open Doors reports that there are 300,000 plus Christians who are forced to keep their faith a secret and its CEO, David Curry, urges us to be cautious in our expectations: “The world must remember that nothing yet has changed for the Christians of North Korea who still face imprisonment and death. I am hopeful progress has been achieved, not only toward denuclearization—which is good for the entire world—but also away from a totalitarian state under which many North Korean Christians have suffered for decades.”

David reminds us that North Korea has been Number 1 on the World Watch List and has been regarded as the most dangerous country in the world for Christians for 17 consecutive years. “To see it move, even a few slots on the list would signal a radical answer to prayer for the persecuted inside North Korea,” he says.

Like a patient who has been in a coma, North Korea will awaken

Prophetic Preacher and respected writer, Lee Grady seems more optimistic. Though he doesn’t hold back on giving details of past atrocities in his article, North Korea Will Open Its Doors to Christianity, he believes God has worked a miracle. “The Lord has heard the prayers of His people on both sides of this conflict—and the prayers of the faithful around the world who felt North Korea’s pain. He will engineer a lasting peace and open the doors wide for the Gospel to flourish in a thirsty land,” Lee writes in Charisma Magazine.

“Before long, the churches of South Korea will freely send teams into the North with food, medicine and the message of Christ. Like a patient who has been in a coma, North Korea will awaken. The world will watch a national transformation. We are witnessing the greatest display of God’s sovereign power over nations since the Berlin Wall fell.”

Given the prayers of all who are praying in South Korea, where the world’s largest church is located, we should not be surprised. What may surprise many is that  Kim Jong Un’s great grandparents were devout Christians. “But given that North Koreans live in a society that requires constant idolization of the Supreme Leader, and since outside communications and information are completely shut off, they are unaware of the Kim family’s history,” Kang Mi Jin writes in an article entitled: ‘Top Secret for North Koreans, Royal Family Was Christian Family.’

Like Dagon before the ark of God, every idol will come down

Prophetically speaking the current situation in North Korea brings several Old Testament parallels to mind. Though North Korea currently embraces athiesm, ‘Juche’ is said to be its national religion, encouraging worship of ‘the supreme leader’. As a result, there are massive statues to Kim Il Sung and Kim Jong Il in the North Korean capital, Pyongyang.

These towering 20m / 66 foot tall bronze statues are intimidating to say the least. They look like something out of the book of Daniel where Nebuchadnezzar commanded everyone to worship a golden statue. We know the story, how everyone had to bow before the statue when the music played, but Shadrach, Meshach, and Abed-Nego refused to do so and they were thrown into a fiery furnace.

However, the Angel of Lord appeared in the pit and saved them. This led to a complete turn around from the King – instead of persecuting these three devout believers he promoted them. This is our prayer for the believers of North Korea. According to some reports they themselves are not aspiring to remove Kim Jong Un

We hope Kim Jong Un is having a ‘Nebuchadnezzar turnaround’. That we cannot guarantee, but we have seen the statues of many dictators toppled in recent years, from Lenin to Saddam Hussein to Gaddafi. And, ultimately no idol can stand in the way of our God, just like the pagan entity, Dagon could not stand in the presence of the Ark of the Covenant.

“When the Philistines took the Ark of God, they brought it into the house of Dagon  and set it by Dagon. And when the people of Ashdod arose early in the morning, there was Dagon, fallen on its face to the earth before the Ark of the Lord.” (1 Samuel 5;2-3)

We pray for the Christians of North Korea, that each and every one will be set free. We thank God for rescuing them from the fiery furnace and pray for the Gospel to be celebrated and shared freely in their land.

“Nebuchadnezzar spoke, saying, ‘Blessed be the God of Shadrach, Meshach, and Abed-Nego, who sent His Angel and delivered His servants who trusted in Him… that they should not serve nor worship any god except their own God! Therefore I make a decree that any people, nation, or language which speaks anything amiss against the God of Shadrach, Meshach, and Abed-Nego shall be cut in pieces, and their houses shall be made an ash heap; because there is no other God who can deliver like this’.” (Samuel 3:28-29)

For more about the miracle that is unfolding in North Korea read:  Hope for Peace Arises as Leaders of North and South Korea meet.